For the first time in 30 years, the SANFL – Australia’s oldest major league football competition – is free of the AFL.

But for new SA Football Commission chairman Rob Kerin it’s a separation, not a divorce.

SA football traditionalists have savoured the SANFL season that almost never was. This weekend, the eight semi-professional clubs will complete their 14-round home-and-away season to settle on a final four free of any AFL reserves teams (as has been the case since 2014) and of any AFL professionals filtering back to SANFL clubs (as it was from 1991).

The SANFL, even under the financial pressure posed by the COVID pandemic, has survived without the biggest of its traditional drawcards, Port Adelaide. There are many who will say the SANFL is better to watch this year than the low-scoring, defensive-minded pros in the big league.

Enjoy it while it lasts.

Port Adelaide and the Crows are coming back to the SANFL. When that happens depends on an end to the COVID crisis that prevents AFL players leaving their “biosphere bubbles” to play in second-tier competitions, such as the SANFL.

How that happens is a debate on hold until the AFL decides player list sizes for next season and beyond. These lists certainly will be cut, most probably from 44 to 38, leaving Port Adelaide and the Crows to enter challenging negotiations on where it finds the “top-up” players to be competitive in the SANFL.

Kerin is the man caught between the two “independent” SA-based AFL clubs and his eight SANFL constituents, who grimace upon losing local talent to the nationally driven Power and Crows – and then facing them as rivals in state league games in Adelaide’s suburbia.

“The AFL clubs,” Kerin says of Port Adelaide and Adelaide, “are good about staying in the SANFL.”

The SANFL in 2014 sold a 14-year licence for the Crows to play in the SANFL with a $400,000-a-season fee; Port Adelaide, as an SANFL foundation club from the league’s start in 1877, gave up its annual dividend that equated to a similar dollar value.

“It was not their decision to not play in the SANFL this year – it was part of the conditions that allowed the AFL to go ahead this season,” Kerin told InDaily. “When we get back to the ‘old normal’, the AFL clubs will want to have two competitive teams in the SANFL.

“That could be challenging with AFL list sizes coming down. We already know that if Port Adelaide or the Crows have less than a dozen AFL-listed players in their SANFL line-ups, their performances fall.

“Establishing the recruiting rules for ‘top-up’ players will be a fair balancing act. The SANFL clubs will not want to lose talent to AFL reserves teams.

“Cutting AFL list sizes is inevitable. However, that does mean there could be about 90 players released from AFL clubs. They will be looking for a path back to the AFL – and the SANFL is a viable path for them. That is a positive for our league.”

As always with football, expect some heavy debate on how this refit of the Port Adelaide Magpies and Crows reserves in the SANFL unfolds.

For Kerin, this should be just a continuation of all he knew in politics while serving as state Premier from October 2001 to March 2002. He followed John Olsen to that role on North Terrace, just as has he succeeded Olsen to the SANFL presidency. 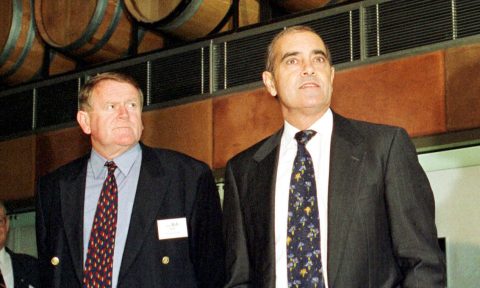 Olsen always regarded state politics are a mere warm-up act to football politics. Kerin will learn the same, although he has had a fair lead-in as an SANFL league director.

Kerin was elected as Olsen’s successor on March 10 with a three-year term.

“Three days later, Friday the 13th,”I was at the Variety Club (charity) Showdown lunch at Adelaide Oval when the call came at 1pm to get to the SANFL offices,” he recalls. “I didn’t leave those meetings until 5.30 that afternoon.”

“We went from being confident of having a normal season to finding the AFL on the phone in the middle of that afternoon – and the season then was put on hold until a review in May.”

SANFL football resumed on June 27 with all components in place – league, reserves, juniors and the women’s league that was underway before the COVID lockdown. It is the only state league to manage such while the VFL had to abandon its season under the weight of the COVID crisis in Victoria.

Kerin’s close link to country SA has allowed him to see the damage done by football seasons not starting in the bush and regional leagues.

“The social base – a way of life – for so many people has been taken away,” he said.

Kerin delivered the SANFL’s annual report on March 10 proudly declaring “we are in reasonably good shape, particularly with the league being $2 million away from breaking free of debt”.

“Suddenly, that has changed,” he said.

The SANFL’s revenue streams were cut. The almost $16 million the league was to have generated from football operations this year would have been no more than $2 million had the season been cancelled in June. The financial squeeze by continuing during COVID is significantly eased for the league and clubs by SANFL players taking no match fees this season.

At Adelaide Oval, the budgeted $15 million from AFL games will fall dramatically this year. The final count depends on crowd sizes to events and the cost of managing the venue.

“COVID protocols on social distancing mean we had to open everything at the Oval, every food and drink stand and every toilet to stop crowding,” Kerin said. “With 10,000 fans in the ground, high staffing numbers, every fridge turned on and full cleaning, the costs are very high.

“It will be tough to make a profit at the Oval this year. That is why the hotel will be very important to us next year,” added Kerin of the contentious hotel that opens at the Oval today.

Kerin’s awkward start to the SANFL presidency does stoke the emotions he felt in replacing Olsen as state Premier.

“That was a sad day – an injustice in my eyes as John was forced to resign when he had always acted in the best interests of the state,” he said. “When I was back in my office and telephoned home to Crystal Brook at 10 that night, everyone was at my place for a party. For me, it was not a time for a party.”

The celebrations from following Olsen to another high-profile role in SA society also have been short and forced Kerin to change his agenda.

Before COVID, he was to have faced an agitated SANFL club base wanting power again. He needed to be the peacemaker, reassuring the clubs the agenda was now focussed on them rather than AFL licences (released in 2014), Football Park, Adelaide Oval or debt reduction.

“Now the agenda has three themes – survival, recovery and rebuild. We are still on survival.”

He emphasises “transparency”, believing the more the SANFL clubs see, the more they will understand of the complex SA football model that includes AFL partnerships, Adelaide Oval, the state league and community and country football.

“We’ve spent a lot more time with the league directors, we’ve seen all the boards,” Kerin said. “We’ve explained the importance of the Crows and Port Adelaide to our competition. It all ties together.

“We need to be very transparent with the SANFL clubs – and explain how all these parts are tied together. With so much of our football and financial issues inter-related, we can’t be making decisions in isolation.”

Kerin will start the post-season in November with a new chief executive – an “internal” appointment with Darren Chandler returning to the league from the Adelaide Oval Stadium Authority.

Chandler, 47, worked in the league’s football department from 2009-2012 after being chief executive at the Glenelg Football Club from 2002-2008. He has spent the past eight years with the AOSMA in charge of the venue’s operations and commercial division.

“We had a very strong field of applicants,” Kerin said. “But we were not looking at a normal chief executive to run a business. We need someone who can work through the dynamics of our league, our partnership with the SACA in the Oval’s management model and the Crows and Port Adelaide.

“This requires a unique skill set. We were happy with the people who have come forward. There is plenty of good talent out there.”

Chandler, a former league player at West Adelaide, brings experiences that will help the SANFL understand the in-COVID and post-pandemic challenges of bringing more fans to Adelaide Oval – a burden not left to the Crows and Port Adelaide alone.

“Cutting food prices at Adelaide Oval this year has been met with a positive reaction,” Kerin said. “We hope to keep more people coming to the Oval now that it is approaching its 10th season since the redevelopment. Time will tell if they will spend more money with cheaper food and drink prices.”

Fans spending more at the Oval is critical while debt stays on the league’s books. How much red ink is still to be counted.

“We will take on more debt. And we do not have a lot of new lending capacity (with Bendigo Bank),” Kerin said. “We won’t use up all of that borrowing capacity. We’re grateful that our sponsors – like Statewide Super – stuck with us so that we did not need to go too deep into new debt.”

The new leadership team at SANFL headquarters will be working on shifting sand while there is no certain end to the coronavirus pandemic.

“It’s hard to make any predictions; every assumption you work with keeps changing, all the time,” Kerin said. “One of the earliest bits of advice was for us to pack away the competition for this year. I am glad we did not take that advice. This is going to be one of the fiercest battles for the SANFL premiership we have seen for quite a while. And I’m proud of what we will have achieved by the end of it.”