Steven Trigg, a former Adelaide Football Club chief executive, has been out of AFL football for two years now. In the past month, the former SANFL footballer has been courted to be Rob Chapman’s successor as Crows chairman from October.

The “old guard” of the Adelaide Football Club’s forefathers – concerned with the future direction of South Australia’s first and biggest AFL club – have begun a power play to shape a new board at West Lakes. This repeats how their counterparts at Port Adelaide sought to return to the boardroom at Alberton as saviours during that club’s darkest hour in 2012.

Then AFL boss, league chief executive Andrew Demetriou, put an end to such on the morning of the 2012 grand final by sacking the Port Adelaide board and demanding a new group of directors. He endorsed television personality David Koch as the club’s new president.

Demetriou’s successor Gillon McLachlan will not have to do the same with Trigg, now managing director of Seppeltsfield Wines – the South Australian company owned by recently appointed Crows board member Warren Randall.

Beyond appreciating life away from football politics after being sacked as Carlton’s chief executive in October 2017 and clearing his desk midway through 2018, Trigg knows he cannot return to the Adelaide Football Club – just yet.

First, following Chapman as chairman – despite all the credentials to do the unpaid job – would smack of the “boys’ club” theme continuing at West Lakes.

Second, the stain from “taking one for the team” during the Kurt Tippett salary cap breaches has not washed from Trigg’s image – even after almost eight years. Trigg in November 2012 pleaded guilty to three AFL charges of “conduct prejudicial to the draft” and “breaches of the total player payments provisions” and copped a $50,000 fine and ban from the club for six months.

Trigg returned to the chief executive’s seat at West Lakes, but resigned in July 2014 to join Carlton – and to give Adelaide “clear air” after the Tippett scandal. 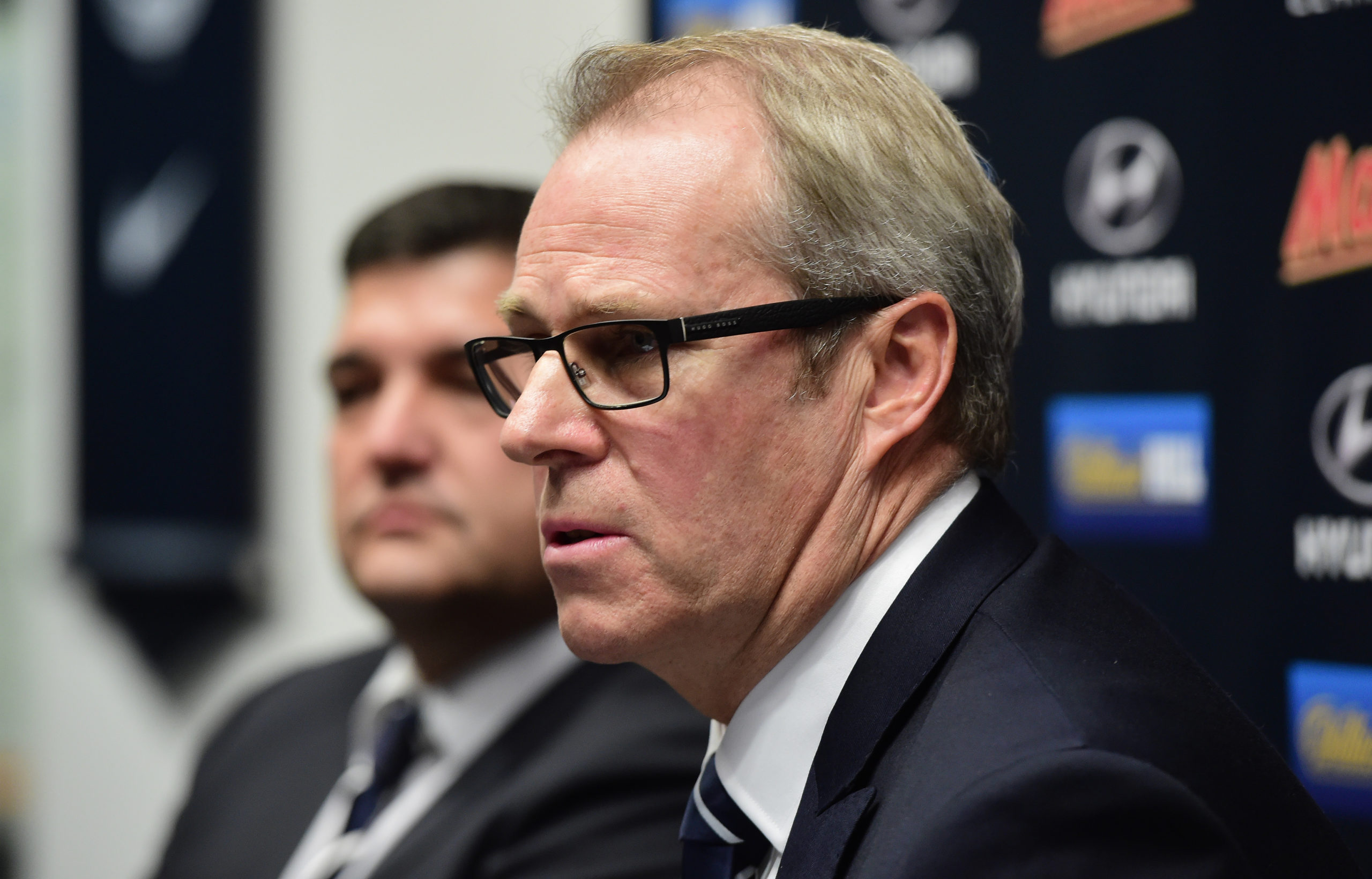 Steven Trigg in his Carlton days: he’s been courted to take over the Crows’ chairmanship. Photo: AAP/Julian Smith

Adelaide’s refit to climb out of the AFL cellar goes well beyond the football program.

Chapman, the club chairman since 2009, insists he will leave the club at the end of the season – October in Adelaide’s case. His vice-chairman Jim Hazel will follow. Would-be chairman Jim McDowell already has gone – ushering Randall to the board – to focus on his duties in the Premier’s department.

This leaves two board seats to eventually fill – and both directors will be endorsed by the AFL Commission and not the Adelaide membership. Former federal minister Christopher Pyne has been courted while denying the approaches were from the club; Adelaide 36ers basketball owner Grant Kelley has packed away his ambitions to enter football politics and can now concentrate on the real thing on North Terrace with State Premier Steve Marshall.

Premiership player David Pittman, who has ably taken up varied roles in football at club and league level since retiring at the end of 1999 after 131 AFL games with the Crows, has steadfastly refused to answer the call from former team-mates to join the Adelaide board to be groomed as a future chairman.

Pittman, an institutional dealer in the stockbroker world for Taylor Collison Limited, has successfully refloated a football club – Glenunga – in amateur ranks. He was much admired for reuniting that club by drawing together strong talent and resources – and reinforcing Glenunga with unity.

These are much-needed attributes for any would-be successor to Chapman at Adelaide. Pittman notes “to do it right it (in AFL ranks) would take a lot of time and energy.”

And, “to turn it around and win premierships,” he adds, “you have to be maniacally fully invested”.

It is uncertain how far the “old guard” – with key influential figures such as former board members Bill Sanders, Alan Shepherd and Adrian Sutter – can work any power play to, as one observer put it, “stop the Adelaide Football Club becoming the Adelaide High Society Club”.

After counselling Kelley, Sanders has urged another potential candidate – “with a strong football pedigree” – to consider sitting on the Adelaide board.

This is why more and more of the membership is questioning its relationship with the club. There is a governance problem.

A long-time critic of governance and the constitution at the Adelaide Football Club, former federal senator Chris Schacht, continues to take issue with the club’s destiny and direction being commanded by the licence holder, the AFL Commission in Melbourne, rather than the membership base.

“Warren Randall as an individual businessman is very successful in South Australia, Australia and internationally – and I congratulate him on his achievements in the wine industry,” Schacht told InDaily.

Adelaide has nine directors with just two chosen by the members – premiership player Rod Jameson and lawyer Kym Ryder. Both appointments still needed AFL Commission endorsement, as was the case with the SA Football Commission until 2014 when the Crows and Port Adelaide licences were bought from the SANFL.

Chapman insists there is a successor on the current board, but he has not – as Sanders did with him – endorsed any of former federal politician Kate Ellis, McDowell or the much-liked Richard Fennell by appointing them as vice-chairman.

Brownlow Medallist Mark Ricciuto has harboured aspirations to be the club chairman. But his growing list of controversial statements on radio – in particular his outburst demanding “supporters should back our people in and if they don’t, well maybe they don’t need to barrack for the footy club any more” last year – makes the club legend difficult to approve as a successor.

More so when Ricciuto has continued to be conflicted by his remarks on radio and the need for statesmanship as an AFL club chairman. As one former AFL club board member told InDaily: “The problem for Mark Ricciuto and other former players on AFL club boards is they presume everyone will applaud him, as it was when he was playing. You are judged differently as a club director – and are expected to hold up different standards.”

Chapman’s exit was first planned at the end of 2017. But the death of Bob Foord, a director with a strong football background at SANFL club West Adelaide, other sports such as hockey and soccer and in business, forced Chapman to extend his stay in “extraordinary circumstances”.

The uncertainty created by the COVID pandemic – that is leaving Australian football in heavy debt – could force Chapman to stay on, particularly when his current term as a director does not expire until February-March 2022.

Another “extraordinary circumstance” could be the exit of chief executive Andrew Fagan, who has made Adelaide a financially strong club with annual revenue of $58 million but failed to deliver the “authentic football club” envisioned by the late Phil Walsh. This issue is a key part of club legend Andrew McLeod’s recent public criticism of the Adelaide Football Club for ignoring the members’ needs.

Fagan also – while Adelaide produces its worst on-field results in 30 years – is subject to criticism for not delivering on his vision detailed on his arrival at West Lakes in September 2014. He said: “The vision should be (to make the Crows) the most respected and successful (team) in the country. That is my history … deliver the best football program because that is what you can control. Put the right people in the right seats – and get the right system in place.

“That is the focus for me – give the Adelaide Crows the best football program in the AFL.”

After five years, this has not transpired.

This series reviewing the Adelaide Football Club will conclude tomorrow, with part four looking at the Crows’ future direction.

Part 1: “The system didn’t get us… we made mistakes”