Justin Reid followed his father’s footsteps to a prime office in the Adelaide Football Club in December 2014 carrying sage advice.

“I have seen some clubs fall into the trap (of paying too much for one player) … and we have to make sure at Adelaide that we take a whole list view,” Reid said.

Four years later, Reid had fallen into the very hole he had marked as a no-go zone. He paid too much – far too much with two first-round draft picks – in the 2017 trade period for Carlton’s 2006 No.1 draftee, Bryce Gibbs – the South Australian the Crows thought should have been eligible for their first father-son pick.

Today, Gibbs has not commanded a place in Adelaide’s match 22 since the restart of the AFL competition after the 12-week COVID shutdown. He turned 31 in March – and he still has next year on his costly contract that came with him from Carlton.

“Recently,” says Adelaide premiership coach Malcolm Blight referring to the past decade, “the Crows have made only one big recruiting play – Bryce Gibbs. And that has not worked out as a good pick.”

Elsewhere in the AFL system – where no-one from any AFL club wants to be publicly identified in comments on other clubs’ list-management themes – an experienced recruiting scout declared: “Bryce Gibbs was a massive mistake.”

Long wanted and pursued by Adelaide, Gibbs was well short of the halfway mark of his five-year contract at Carlton when he signalled during the 2016 trade period a wish to return to South Australia for family reasons. He wanted a family network around his partner, Lauren Tscharke, and their young son Charlie.

The trade plays between Reid and his Carlton counterpart Stephen Silvagni repeatedly stalled while Silvagni demanded two first-round draft picks – and ended with a bitter exchange of words between the two clubs. At the end of the trade period, Reid declared: “There has to be value for both parties (in a trade) … We do not believe that would’ve been the case if we were to hand over at least two first-round draft picks or a combination of players, who are crucial to our short- and long-term success, as was requested.”

But a year later – after losing the 2017 AFL grand final in which Adelaide started as favourites but lost by 48 points to Richmond at the MCG – Reid paid Carlton’s ransom.

Stewart appears to have fallen out of favour after he had recommended during the 2016 season that the Crows accept a lucrative offer on draft picks from Brisbane for key forward-ruckman Josh Jenkins.

While Adelaide premiership captain Mark Bickley calls for a board-led review of the Crows’ drafting, trading and recruiting under the watch of Reid and club recruiting manager Hamish Ogilvie, the heat for the Gibbs deal cannot stay solely on these two men.

In May 2018 – when Adelaide thought Gibbs was the crowning piece for their premiership jigsaw puzzle – the Crows media division was pushing an interview that praised club chief executive Andrew Fagan for making sure the deal was done in the trade period of October 2017.

To quote The Advertiser story reporting how Fagan, from his holiday in Queensland, acted: “Andrew Fagan’s instructions to his list management team were loud and clear. ‘Do not leave that meeting (with Silvagni at a Melbourne restaurant) without a deal being done for Bryce.'”

List-management reviews at AFL clubs are flawed by the benefit of hindsight – and need to factor in the power plays by coaches, or, in the Gibbs case at Adelaide, an image-conscious chief executive seemingly influenced by the need to score a publicity win at the trade table.

Adelaide has been here before. At the 2000 AFL national draft, Adelaide recruiting manager James Fantasia was derailed from his plan to use pick No.7 for Kane Cornes, the younger son of Crows inaugural coach Graham Cornes.

As former Adelaide Football Club chairman and chief executive Bill Sanders recalls it: “The recruiting guys had seen Angwin stand out in the tests in Melbourne a few weeks before… and they were surprised he was still there in the draft when they had their pick.”

Adelaide’s coach at the time was Gary Ayres, a Hawthorn premiership great. Laurence Angwin is the grandson of former Hawthorn player Andy Angwin. Fantasia is said to have been over-ruled on Cornes by Ayres’ belief in a Hawthorn prodigy.

History records Angwin never played for Adelaide while creating a series of off-field issues that had him clearing his locker at West Lakes after only one season. Cornes, by contrast, was picked up by Port Adelaide at call No. 20 – and became the club’s first 300-game player in the AFL and a key part of its midfield in the 2004 premiership campaign. 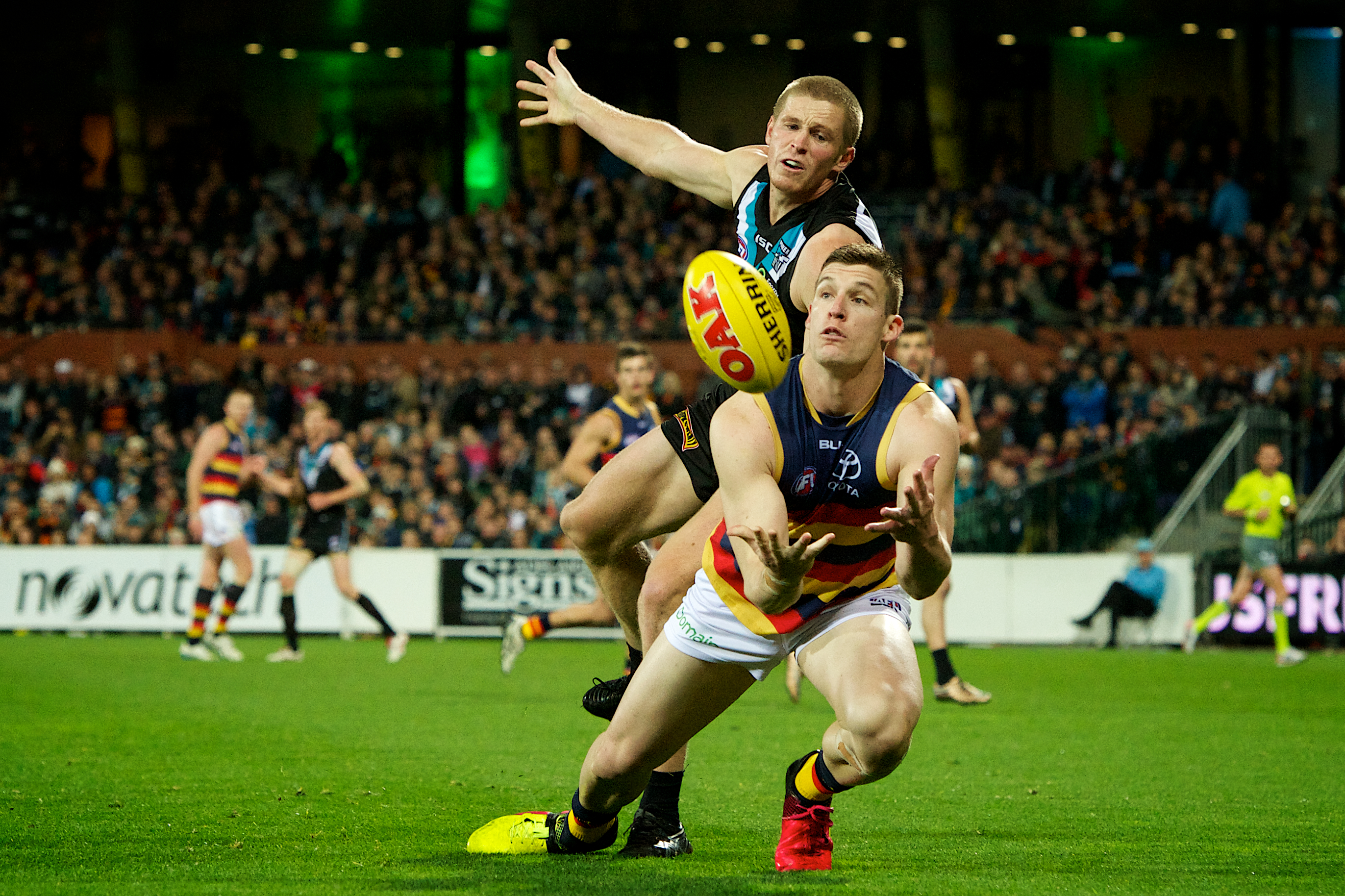 History repeats. AFL recruiting experts tell InDaily they believe Ogilvie and Reid were set on claiming West Australian ruck prospect Tim English – to cater for life after veteran warhorse Sam Jacobs – with pick No. 15 in the 2016 AFL national draft. But Crows senior coach Don Pyke demanded speed for his midfield – a critical part of the team that was considered slow and one-dimensional.

Adelaide picked Victorian Jordan Gallucci, who has played just 27 AFL games and is on the long-term injury list this season after damaging an Achilles’ tendon.

English went to the Western Bulldogs at call No.19 – and is a rising star.

The Angwin and Gallucci examples – the sort of calls that are not exclusive to Adelaide – highlight the danger AFL clubs inflict on themselves with list management when the recruiting staff are ignored to answer a coach’s demands. Such moments demand strength from the list manager.

Adelaide’s recruiting, particularly at the AFL national draft, is always subject to debate – more so when fans and critics revisit the draft calls to question why the Crows overlooked SA-based talent that ultimately thrives interstate; or failed to find much-needed speed for the midfield.

Externally, rival AFL clubs note a shift in direction in recruiting from West Lakes late in 2016. This coincides with Adelaide’s list-management group shunning highly respected recruiting master Alan Stewart, who joined the Crows after soon watching his strategies pay off at Port Adelaide with its breakthrough 2004 AFL premiership.

Stewart appears to have fallen out of favour after he had recommended during the 2016 season that the Crows accept a lucrative offer on draft picks from Brisbane for key forward-ruckman Josh Jenkins. Instead, Adelaide not only re-contracted Jenkins but offered him a five-year deal rather than the four he was aiming to secure from the Crows.

Jenkins last year was traded to Geelong after falling out with the team and club management that labelled him as “cancerous” after he protested the continued use of the Collective Mind leadership program at Adelaide. He has part of that original five-season deal still being paid by the Crows while he plays for Geelong.

Insiders tell InDaily that Stewart was never again invited to list-management sessions nor handed the minutes from this committee’s meetings after pushing for Jenkins to be traded in 2016. Stewart retired in September 2017, immediately after Adelaide’s grand final loss, having spent 13 years with the Crows. His verdict on Jenkins was justified by the key forward failing in the grand final (seven disposals, no score) – and acknowledged internally by club chief executive Andrew Fagan.

As is often the way at Adelaide, a player’s value is heavily discounted by Crows officials when he defects…

Blight is clear on how Adelaide has to rebuild its poorly performing team.

But who should do this at West Lakes?

“They have done a pretty good job in what is not a science but a very subjective field,” Chapman said.

“After the (2017) grand final we backed in our team. I am not saying that was the wrong call. But at the end of last year we decided we would bolster the list with young talent. We will have five top-20 draft picks – and that will add to our complete reset. Then we will look at what we can trade in the next couple of years.”

Reid has publicly declared Adelaide is halfway through its reset – and he will land a big recruit in the trade market. Media critics are not so sure. Kane Cornes has described Reid’s claim as “delusional”. The task of presenting to would-be recruits, player agents and draftees the image of Adelaide as a “destination club” that can fulfil a player’s premiership dream will test Reid’s salesmanship.

Expert assessments of Adelaide’s list do conclude Reid – if he continues to command the role – will need another three years to rebuild the list. At the end of last year, former Western Bulldogs and Richmond coach Terry Wallace – the so-called “list manager” – noted the Crows had the “oldest team in the AFL”.

In reflecting on Adelaide’s poor start, Wallace expresses “extreme disappointment” with well-established players such as Rory Laird, Brodie Smith and the Crouch brothers, Brad and All-Australian midfielder Matt who was dropped from the line-up in round 4.

“They have not done their bit to help (the team) through,” Wallace said. “So much gets lumped on (former captain) Taylor Walker, but it is those guys who are seen as their better players – All-Australians and top of the best-and-fairest leaderboard – who have let them down.”

Wallace endorses putting the Crouch brothers – and the “heart and soul” of the team in captain Rory Sloane – on the trade table at the end of the year because “they are too slow in the middle of the ground”.

Much will be made of Adelaide’s calls at recent drafts, as noted with Bickley’s call for a review before allowing Ogilvie and Reid to continue the refit in this year’s AFL national draft. This is still expected to unfold in late November.

“But you need to know what was being thought inside the tent at the time – did Adelaide choose for needs (as in Gallucci for speed) or obvious talent (such as English as a prime ruckman)?” one list management expert told InDaily.

Inside the Crows' downfall: "The system didn't get us... we made mistakes"

There is no question Adelaide has lost quality players who were regarded as the fabric of a competitive team or premiership line-up at West Lakes: Dangerfield, Phil Davis, Jack Gunston, Kurt Tippett, Jake Lever, Charlie Cameron and Mitch McGovern, who was once lauded internally as a good pick at No.43 in the 2014 AFL national draft.

As is often the way at Adelaide, a player’s value is heavily discounted by Crows officials when he defects – as noted recently with board member and list-management chairman Mark Ricciuto’s caustic public remarks on McGovern (now at Carlton).

Adelaide’s list management is a major agenda item at West Lakes. But so too is the future leadership of the club from the board room and the front office. This will be the focus of  part three of the InDaily review of the Adelaide Football Club.