The review, instigated after the Crows crashed out of finals contention for the second successive year since contesting the 2017 Grand Final, was conducted by a panel comprised of Hawthorn great Jason Dunstall, former Fremantle captain Matthew Pavlich and consultants Jonah Oliver and Dr Tim Gabbett.

In a statement today, the Crows said Head of Football Brett Burton would “depart the club”, along with veteran assistant coach Scott Camporeale, who filled in as interim senior coach in 2015 after the death of Phil Walsh and steered the team to its first finals win in three years.

Camporeale previously had oversight of the midfield group, but was the senior assistant with oversight of game strategy in 2019 under Don Pyke, who has already departed the club after a listless second half of the season saw the club lose all but two of its last nine games. 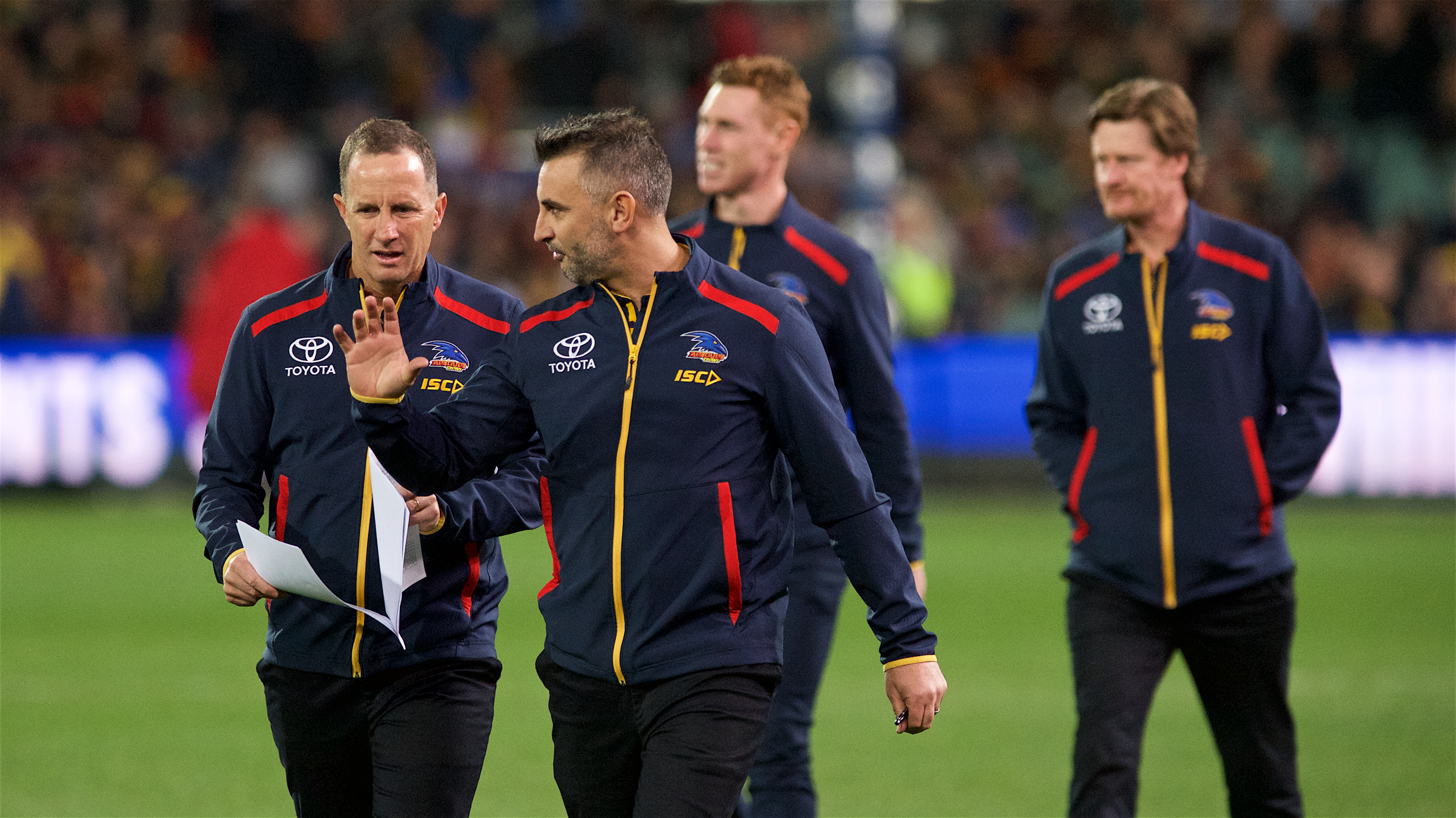 Burton, who played 177 games for the Crows between 1999 and 2010, has been head of football since November 2016, when he replaced Brisbane-bound David Noble.

He was previously the club’s general manager of high performance.

The club said the sackings gave “consideration to the review findings, coupled with an overwhelming desire to refresh the football department under the leadership of a new senior coach”, whose appointment is likely to be announced early next week.

Both men were under contract, with the club set to “pay some tax” as a result of the axings, according to CEO Andrew Fagan.

Fagan told InDaily it was “important to note the review process was about identifying trends, themes and issues that we thought could be improved upon, or were holding us back from delivering at the level necessary”.

“It wasn’t about targeting individuals at all,” he insisted.

However, he said the audit “ultimately identified the need for change – particularly with a new senior coach coming on board”.

“We just wanted that person, given the distraction of the past couple of years, to have as clean a slate as possible to put together a program to perform at the highest possible level,” he said.

He said the moves would “ultimately enable a new coach to bring someone in themselves”.

Asked if the pair had become sacrificial lambs for the club’s much-publicised failings, he said: “They’re really tough decisions, because sometimes you just need to change things.”

“Sometimes you do need to look at why, to draw a line in the sand and move forward in a way that can best influence positive outcomes,” Fagan said.

“And these were tough conversations, with people who have invested significantly in this club.”

He said the question became “a case of ‘where’s the change that can best provide a decision we think will enable us to move forward with fresh air’”.

While a senior coach is yet to be publicly unveiled, Fagan said he didn’t expect further departures from the football department.

“I don’t – there’s been significant change, and senior leadership change, within the football department,” he said.

“I suspect it ends there.”

The club will be “required to pay some tax for the next year or two” as a result of the sackings, with Fagan insisting “that’s why we work so hard to keep the club healthy off-field” – and suggesting the club would be willing to breach the AFL’s ‘soft cap’ on football department spending and incur a financial sanction if necessary.

“The focus is on making sure we get the right people to fill those roles,” he said.

“One of the benefits of being in a healthy position off-field [is] so we can make whatever the right decision is to fill those roles… if that means we’ve got to pay some tax for a period of time, so be it.”

The club will also create a new position, Head of Leadership and Culture, “to deliver a new player leadership program across all areas of the football department, including AFL and AFLW”.

It comes as a now-notorious pre-season camp at the Gold Coast after the Crows’ failed Grand Final continues to dog the club, with outgoing midfielder Cam Ellis-Yolmen this week intimating the venture “didn’t work”, telling the AFL’s Trade Radio podcast it had “hurt the culture in the club and divided us”.

Burton has worn much of the chagrin over the failed camp, which saw the club part ways with controversial “mind performance” company Collective Mind during the 2018 season.

At the time, he repeatedly asserted during a poorly-received media conference that there were “no lingering issues” from the camp.

The club said the review had examined “the key areas that impact team performance and to then provide key insights back to the board to support a series of decisions aimed at creating a blueprint for sustained success into the future”.

The club statement said the external investigation and the Crows’ own post-season review found there was “no single issue solely responsible for the inconsistent on-field performance in the last two seasons, but rather a series of events or issues that, despite a number of attempts, could not be sufficiently addressed”.

“Some of these events or issues were well documented publicly and others could be considered minor, but they combined to compromise the quality and delivery of the broader football program,” it said.

“It was noted that under pressure and the intense scrutiny of a professional sporting landscape, there needed to be a greater and more effective emphasis on maintaining, and in some instances improving, personal relationships.”

While there were “a number of high-level coaching, athletic performance and football administration staff delivering effective programs across the broad spectrum of the football department [the review] importantly found some key changes were required”.

Chairman Rob Chapman said in a statement: “The last two seasons have been challenging from an on-field perspective and there have been too many distractions off-field as well, and we needed to clearly identify deficiencies which would shape decision making required to make positive change.”

“We had a clear view on what we believed to be the key issues but for a variety of reasons felt that the involvement of external consultants would help ensure the review left no stone unturned, as well as providing the benefit of a different lens or perspective.”

The club said there would be further “minor enhancements” across the football department “consistent with the normal end of year review process”.

“We now have a great opportunity to make new appointments to ensure that we are able to generate the balance and diversity of thought that our players need, together with an injection of resources into areas like leadership development which is increasingly important with an emerging group of younger leaders and a younger list profile,” Chapman said.

“People talk about the club, and the human side is often forgotten… I would like to acknowledge the efforts of both Scott and Brett, who are quality people with a great deal to offer the AFL if they choose to continue in the industry.”

He said the club had to “make change to create the clear air required to give the new senior coach the best chance of success, and we owe it to our members and supporters to ensure the club is strong and successful”.

The review itself will remain confidential, with Chapman telling members in a separate missive “we must balance [transparency] with the welfare of those affected by this process and the impact it has on their livelihoods and families”.

“Like other clubs which have undertaken similar reviews, there is also the need to maintain an element of confidentiality to uphold the integrity of the process, and ensure those who willingly shared information were able to do so knowing they could speak honestly and freely,” he wrote.