When the Adelaide Crows take on Richmond tonight at Adelaide Oval, look out for little Sullivan Latch as he runs past the flames and leads his heroes onto the field.

Sullivan has been chosen as a special mascot for tonight’s clash, marking the end of a long battle for the feisty eight year old, who was diagnosed with leukaemia on his seventh birthday in August 2017.

Sullivan, who lives on the Gold Coast, has endured months of painful cancer treatment, including three rounds of chemotherapy and a bone marrow transplant – bone marrow donated by his younger sister Zahra, now seven.

The little Crows fan spent six months in hospital, including a stint in intensive care, and all the while his Crows gear was close by.

“He had everything Crows in the hospital,” explained Sullivan’s mum Chantelle. “Footy jumper, pillow and his aunty made him a Crows-coloured quilt.

“AFL and footy and the Crows are the one thing that got him through his treatment and to see him well and to be able to enjoy it with the players is just the most amazing feeling as a parent, we are just incredibly grateful.”

The opportunity to fulfil his dream of meeting the Crows was made possible through Bendigo Bank’s Mighty Mascot scheme, which they donated to Make-A-Wish Australia for Sullivan.

Sullivan got the good news last Sunday via a video message from one of his favourite players, Rory Sloane.

“When I watched the video, Rory said something about Bendigo Bank, then he said we’re going to trash Richmond and that I’m going to be running next to him,” said Sullivan, who plays in the under nines for the Burleigh Bombers in Queensland. “It’s pretty cool. I’m a little bit nervous and really excited.”

As part of Sullivan’s Bendigo Bank/Make-A-Wish opportunity, the Latch family were invited to a Crows training session at Adelaide Oval yesterday, where Sullivan got the chance to kick goals alongside Sloane and his other favourites, Eddie Betts and Taylor Walker.

“Today I kicked some goals with Tex and I got about four or five,” Sullivan said.

“The best thing will be running out, but I did like kicking the ball into the goals, but it was quite heavy though, I think it’s one of the ones that they use.” 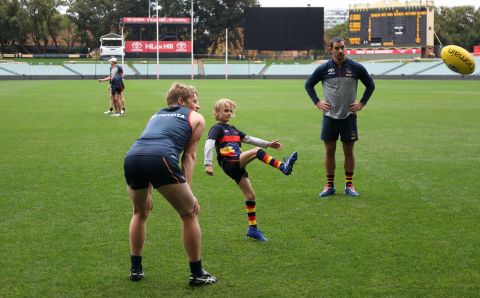 “It took about three goes and then he started putting it over Benny Hart’s head,” Sloane explained. “I think in terms of footy his kick was pretty amazing but what I love most about Sullivan is when I sent the video off [that he’d be a Mighty Mascot], he sent one straight back saying thank you. He’s a pretty special young man.”

By all accounts, Sullivan shouldn’t even barrack for the Crows. His parents are from Victoria; Chantelle is a St Kilda fan, while dad Clint is a West Coast Eagles man.

“He was a St Kilda fan but when he got to Auskick age he just said, ‘Mum, I don’t want to barrack for St Kilda, I want to be with Dad and barrack for West Coast’, and I was like okay, I’ll give that up,” Chantelle said.

“Then we went to Bali and we said you can pick out a jumper and he picked a Crows jumper, put it on his pillow that night, slept with it that night and the whole rest of the time we were in Bali and he’s been a Crows fan ever since.”

That was three years ago and Sullivan’s passion for the Crows hasn’t wavered.

Seeing Sullivan run out onto the field tonight will bring a sense of closure for the young family, which also includes daughter, Indi, three.

After some dark days, the future looks bright as Sullivan is now in remission and having three-monthly check ups.

“This is bringing back all the emotions that we went through,” Chantelle said. “When you are in it you are just in survival mode and you know this is what we’ve got to do, but when you look back you realise, that was pretty full on.

“Just the journey that Sullivan’s been on – he went through such a traumatic time as a seven year old, and we dreamt about this day to be honest.

“It’s an absolute dream come true, he’s going to be so excited.

“This wraps it all up nicely, and what a great way to finish it. It’s really onwards and upwards and we’re very happy to close the door on that and begin again.” 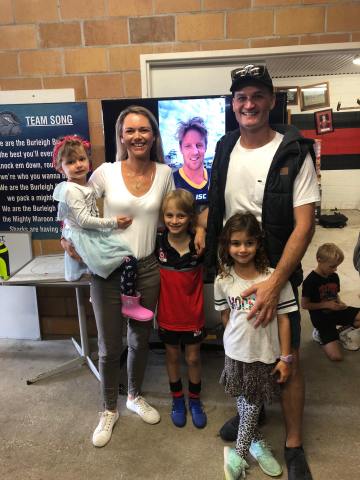 Being able to give back to fans like Sullivan through the Bendigo Bank Mighty Mascot scheme is an all-important part of footy for Sloane.

“It’s only something little that can make the world of difference especially to a kid like Sullivan,” said the Crows champion.

“It’s just something that can make them smile, and it’s the same for us, too. Sometimes I think people don’t realise that, just the gratitude you get from helping someone out and just putting a smile on their face.

“It’s really rewarding and it’s always that satisfaction for doing something for others, it’s one of the greatest qualities you can have. There’s so many people across the footy industry that do stuff like this for others and its something we should keep doing.”

Watch out for a Sloane goal during tonight’s game– the gutsy midfielder has made a deal with Sullivan that he’ll give him two thumbs up once the ball goes through the big white sticks.

And who is going to win tonight’s clash?

Sullivan, who plans on being a football player when he grows up, has done his homework.

“The Crows are higher on the ladder, they are fifth and the Tigers are seventh, and the Crows are also better to win, $1.36 to $3. I looked it up.”