Faced with a backlash after two top-line SA players, Wingard and winger Jared Polec, requested to be traded out of Alberton, the Power have salvaged an impressive draft hand and an injection of homegrown talent, going into the draft with picks 5, 10 and 15.

As it stands, the Power’s first draft pick will put them in the box seat to recruit North Adelaide premiership player Connor Rozee, with fellow SA draft prospects Jack Lukosius and Izak Rankine expected to be snapped up within the first three selections. 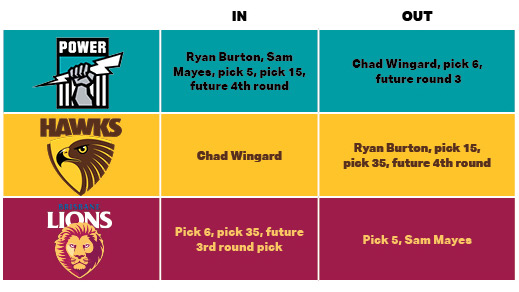 However, the gains are offset by the departure of the mercurial Wingard to Hawthorn, and the loss of the line-breaking Polec, who was wooed by a lucrative offer from North Melbourne.

Port also offloaded running defender and former All Australian squad selection Jasper Pittard to the Kangaroos as part of the Polec trade.

The club has also agreed to a deal to send out-of-favour backman Jack Hombsch to the Gold Coast in return for the Suns’ future round four selection.

In this morning’s trade manoeuvres, Port received Burton and picks 15 and 35 from Hawthorn, while swapping lower-rung picks in next year’s draft.

It then on-traded pick 35 and the pick 6 it acquired from an earlier draft pick shuffle with Fremantle to Brisbane in exchange for the Lions’ pick 5 and Mayes, who was originally drafted from North Adelaide at pick 8 in 2012. Having cut his teeth as a forward and midfielder, the Lions primarily played Mayes as a defender in recent years.

It’s been an industrious trade period for Port and Hawthorn, the latter bringing in stars Wingard and former number one draft pick Tom Scully – who yesterday left GWS for a future fourth-round draft pick – as well as unproven top 10 recruit Jack Scrimshaw from the struggling Gold Coast Suns.

Wingard’s loss, though, is a bitter pill for Power supporters, with the show-stealing forward-mid a fan favourite after winning the John Cahill medal in just his second season, and garnering two All Australian jumpers within his first four years in the AFL.

As a @PAFC fan, I’ve made a quick improvement to my Wingard frame…#weareportadelaide #afl #afltrades pic.twitter.com/nQuBfYqHA8

Wingard, 25, took to social media today to “thank the Port Adelaide Football Club for the opportunity to play at the highest level”.

“Has been quite the journey and have enjoyed all the highs and lows with the boys… thank you to the fans who have been there since day one and supported myself and my family through it all,” he wrote.

“My family have been through a lot over the last month and I appreciate all the support from fans and friends who helped us through this time. To the fans, I have always loved you guys, and wish nothing but the best for the boys in the future. But I’m also excited to start my new journey and [take] on another challenge.”

In a statement, the club today emphasised that Burton – who was, according to Port, offered up for trade by the Hawks while holidaying in Las Vegas with teammates – was joining “the club he supported as a child growing up in Adelaide”, and that the 21-year-old could play “in defence, the midfield or up forward”.

“We are excited about what Ryan can bring to Port Adelaide,” said Port’s football manager Chris Davies.

“We know about his ability to play on both talls and smalls as a defender and his versatility to take on a number of roles across the park.

“Clearly he can play as a defender but we see him also developing as a midfielder or forward and having a long and successful future at Alberton.”

I would like to thank the Hawthorn FC and its supporters for the last three years. I am grateful for the opportunity to play AFL Football and live my dream. Now, a new opportunity at Port Adelaide where I can’t wait to play for the team I supported growing up

Davies said 24-year-old Mayes “will add run and experience to our group”.

“We are pleased to be able to bring him back to SA and give him an opportunity to rediscover his best form,” he said, similarly praising the recruit’s versatility.

“Sam can play in defence, on the wing or in the forward line and he can only add value to our squad.”

Davies said Wingard’s trade request had “left the club with a decision to make as to whether we traded him this year and controlled the situation or lost him next year to free agency and receive a compensation pick”.

Chad Wingard: Once in a generation player

“We think we have been able to achieve an outcome here which sees the club secure a talented player in Ryan Burton and draft selections which will help our playing list into the future,” he said.

Both SA AFL clubs now hold a strong hand in a draft brimming with local talent.

Adelaide are expected to explore options for trading picks in a bid to move up the draft order, but are unlikely to finalise any such move before the trade period ends at 8pm tonight. Trading of draft picks can continue through until next month, including live trading during the draft itself.

Draft pick 6 was well-travelled: it was traded from Fremantle to Port, and then on to Brisbane, who packaged it up with pick 19 – received from Gold Coast today in a swap of draft selections – to send it back to Fremantle to snare SA-born midfielder Lachie Neale.

The Dockers then sent it on to Melbourne in a deal for talented spearhead Jesse Hogan, before picking up forward/ruck Rory Lobb from GWS.

Finally, pick 6 was sent over to Gold Coast by Melbourne in a trade that netted the Demons the Suns’ former co-captain Steven May and talented Tasmanian Kade Kolodjashnij.