In a night that went almost entirely to script, the biggest subplot was whether the reigning AFL best and fairest, former Crow Patrick Dangerfield, would follow Friday’s preliminary final loss with the heartbreak of leading the count for a medal for which he was ineligible through suspension.

But Martin surged ahead in the last, snaring the Brownlow with 36 votes to the Cat star’s 33.

For Adelaide, as expected, Rory Sloane jumped out of the blocks before falling back to the pack somewhat after copping the attention of opposition taggers mid-season, to finish with 20 votes, ahead of Matt Crouch (11), Rory Atkins and Sam Jacobs (10 each).

The #squad at our #Brownlow event in Adelaide tonight ? #weflyasone pic.twitter.com/hgV5S5Xgi3

But Martin’s focus was on the week ahead – and a Grand Final against Adelaide on Saturday – and he just wants his football to do the talking.

Winning the AFL’s highest individual honour thrust the Richmond star uncomfortably into the public spotlight last night. One of the game’s most dynamic players, he is also a shy, enigmatic man who is no fan of the media.

Martin politely answered questions at the on-stage presentation and the media conference that followed, but they could not have finished quickly enough for him.

Indeed, once the media conference was over, Martin was walking out of the room and an AFL official had to bring him back for photographs.

Photographers asked him to kiss the medal, but there was no way that was happening.

“I have to deal with it, so I just cop it and don’t spend too much time thinking about it. I’m just here to play footy,” he said of the public attention.

“As soon as I get into the footy club and out there on the ‘G, all I’m thinking about is footy – the rest is just noise.”

At the end of his media conference, Martin was asked if winning the medal might change his thoughts on being in the public spotlight.

The Crows intend to treat Martin as just another Richmond jumper on Saturday – and won’t ignore the other Tiger threats in the premiership decider.

Adelaide ruckman Sam Jacobs told reporters yesterday his midfielders have been asked a similar question throughout the finals: how do they stop their star on-ball opponents?

“Every week we have copped it, whether it’s Dangerfield or (Joel) Selwood or someone like that,” Jacobs said.

“Every team has got some really good players and Richmond are no different.

“Dusty is obviously the head act at the moment.

“Respectfully, they have got a lot of fantastic players and they’re good players in their own right.”

After one of the greatest individual seasons in AFL history, Martin’s 36 votes edged Patrick Dangerfield’s record total last year by one.

But Dangerfield, who was ineligible because of suspension, led for much of the count, with an admittedly-nervous Martin saving the AFL and himself any awkwardness by overhauling him in the last few rounds.

Dangerfield finished on 33 – the first player to poll 30-plus in successive seasons – and Hawthorn’s Tom Mitchell was third on 25.

“It could have been a bit awkward, so it’s just a bit of a relief – no awkwardness,” Martin said of polling more than Dangerfield.

Dangerfield himself said: “For me, I”m still more disappointed about Friday night.”

“Dusty was very much a worthy winner… he’s had a phenomenal season and followed on from where he left off last year,” the Cat said.

“There are bigger things to come for him this week as well – he’s been very good.”

No player has won the Brownlow and the Norm Smith Medal as the grand final’s best player in the same season – Martin is odds-on to go close.

He has thrived this year despite months of intense speculation about his playing future, which ended a few weeks ago when he signed a monster seven-year deal with the Tigers.

“It’s a pretty surreal position to be in, obviously getting the medal and being in a grand final – it’s really awesome,” he said.

“Ever since back in the day, this is all I’ve ever wanted to do, so I put everything into it and I’m glad it’s paid off.

“I’m just finding a good balance of things – every year, you learn new things in the game, whether it be a better diet or a bit more cross training, a bit of meditation here and there.

“It will just be business as usual tomorrow when I get into the club and for the rest of the week… hopefully we can celebrate with a premiership.”

Richmond coach Damien Hardwick says his star midfielder could not care less about being judged best afield in the grand final.

“There’s only one medal he’s interested in – and that’s a premiership medallion,” Hardwick said.

“He loves winning, this kid, just loves it.”

It is that determination that has turned Martin into one of the AFL’s top midfielders.

“He improved, again – it’s been a privilege to coach him for, I think, eight seasons now and every season, he’s improved a facet of his game,” Hardwick said of Martin’s year.

Hardwick said Martin has turned himself into a complete player, who can win the ball inside and outside, as well as go forward and kick goals.

“For a coach, he’s an outstanding chess piece, like a queen – you can put in the midfield, put him up forward, just wherever you need the game to be won,” he said.

“That’s the mark of a good player.

“What he’s really brought to his game this year, his unselfishness has risen to a new level – his ability to make his teammates better.”

In his acceptance speech, Martin thanked long-time manager Ralph Carr, who has secured him his new deal amid speculation he would jump ship after a mega-offer from the struggling Kangaroos.

But several years ago, Carr and Martin’s father Shane said if he did not behave better off the field, they would stop supporting him. 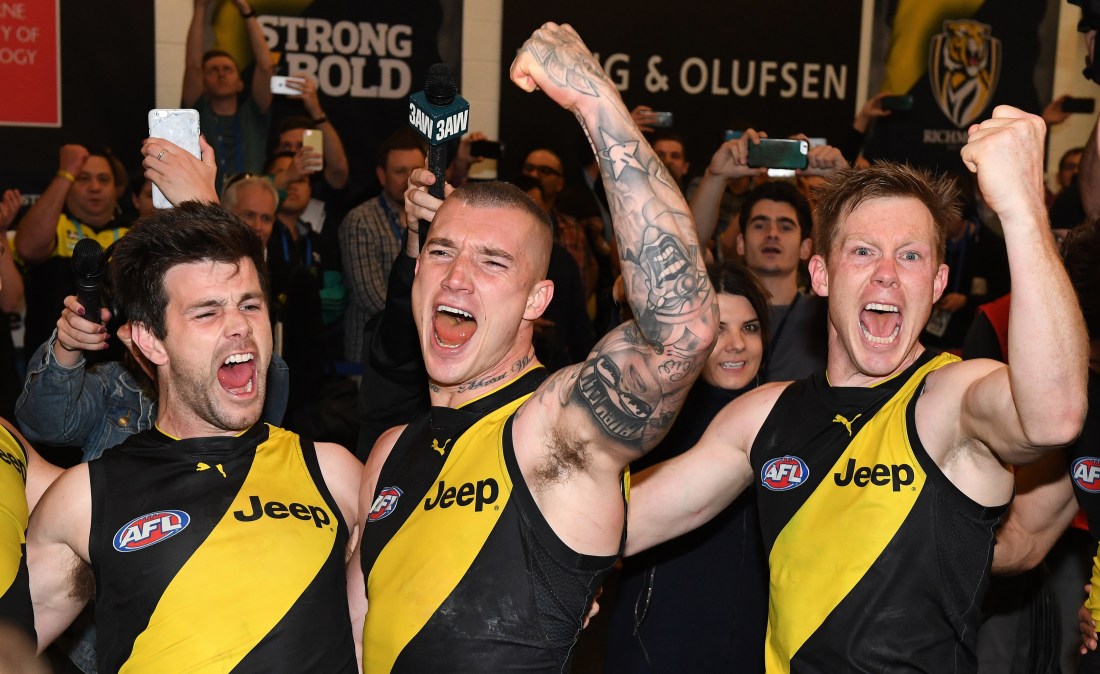 Parents Shane and Kathy were the first people Martin thanked in his acceptance speech and he is especially close to his father.

But Dustin also was unimpressed with his mum after she spoke to a journalist this year.

“I was pretty filthy on her because I told her not to talk to any media,” he said, adding it took a couple of days to forgive Kathy.

Father Shane was deported to New Zealand last year because of his links to the Rebels motorcycle gang.

It meant he could not be in Melbourne for the Brownlow – or for Saturday’s grand final against Adelaide.

“Obviously mum and dad, you’ve always supported me with my footy and I couldn’t have gotten here with you both, I’m so grateful for everything you’ve done for me,” Martin said.

“I know it’s tough for you (Shane) not being here this week, but I know how much you love me and I love you very much.”

Dustin plans to visit Auckland in the next few weeks to see his dad.

Shane kept up to date with the Brownlow count in Auckland and is rapt with the win.

“I was trying to hold back tears. It’s pretty hard, but a very proud moment.”

Dustin left school when he was 14 and went to work for his father.

“I wasn’t a fan of school – I probably should have stayed in school, because I worked a heap of shitty jobs after that,” he said.

“He (Shane) said if I wasn’t in school, he was going to work me hard.”

Of his warning from Carr and Shane about his much-publicised off-field antics, Martin recalled: “I was just a young bloke who liked to play up every now and again.”

“I’m sure Ralph and my old man were sick of it… they told me to pull my head in, otherwise they weren’t going to help me any more,” he said.

“Ever since then I’ve pulled in my head a little bit.”

AFL CEO Gillon McLachlan said Hombsch had “demonstrated his leadership and passion for a cause which provides people living with disabilities and their families an opportunity to live life to the fullest and achieve their dreams”.

“Jack was a stand out for the selection panel – he demonstrated a sense of deep inner commitment and leadership to the issue of disability,” he said.

Midfielder Ollie Wines led the Brownlow count for the Power on 18 votes, ahead of Brad Ebert on 15.