To rub salt into the Crows’ wounds Kennedy conceded a pivotal 50m penalty paid against Eddie Betts that led to Reid’s goal was the wrong call by the umpire.

Reid kicked a goal to narrow the Swans’ deficit to three points in the dying minutes of the game before Tom Papley sealed a memorable win for the visitors over the ladder leaders.

Betts was penalised when he tackled Callum Mills, who played on quickly after taking a mark just outside Adelaide’s attacking 50m.

“What we would have liked in that situation would be the umpire quickly call play on,” Kennedy said.

“What we saw was Mills control the ball, and in our belief, he then made an effort to play on.

“The expectation from us is when Callum did go forward on the mark and go through the play-on motion, our expectation as a group is to call play on.”

Adelaide can’t feel too aggrieved after they came out on the right side of a 28-14 free kick count, but it is rare for the umpiring department to admit they probably got two calls wrong in the same match.

Franklin’s long run and goal with a hapless defender in tow was remarkably similar to his goal of the year against Essendon in 2010.

Except Buddy should have been pinged for running too far.

“That’s a fact, but live, I think it would be really hard for the umpire to tell if he’s run over the 15.

“(But) it still could be (goal of the year), because we didn’t pay a free kick.”

Meanwhile, Swan Zak Jones is free to play against Carlton this weekend, despite his latest run-in with the AFL’s match review panel – but Sydney are satisfied the firebrand is being more astute with his aggression.

Jones was reported for charging Crow Brad Crouch during the Swans’ epic win. The panel felt the late hit warranted a free kick but there was insufficient impact for Jones to be punished further. 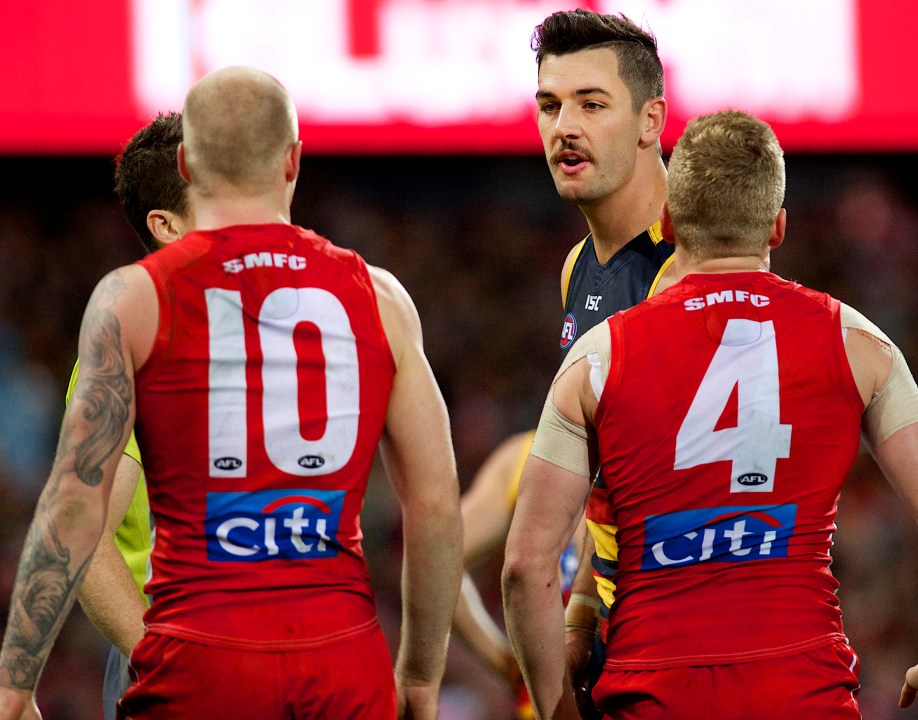 Jones copped a one-game ban for striking Richmond’s Dan Butler off the ball earlier this year and he was also fined for hits on Travis Cloke and Luke Breust.

The 22-year-old’s bad record means even a minor offence will result in a one-match suspension, a potential blow the Swans don’t want to cop in finals.

Jones will continue to walk the match-review-panel tightrope, starting with Saturday’s SCG clash with the Blues.

But the club is satisfied the zippy defender/midfielder, who has been one of their best players in good times and bad this year, is already playing smarter football.

“Zak’s really clear on what he can and can’t do,” Swans football manager Tom Harley said.

“He’s put himself into a position with the number of fines he’s had this year, so he knows where the line is and he’s managing it pretty well.

“It’s the intentional ones that Zak clearly needs to wipe out of his game and to his credit he has.

“The reality is with football there’s going to be instances like that (contest involving Jones and Crouch) on the weekend. We expect our players to go.”

Superstar Franklin has been fined twice this season, meaning he will also be slapped with a one-game ban for the most minor of offences in September.

Meanwhile, Harley dismissed a recent report that suggested former skipper Jarrad McVeigh was “almost certain” to leave the club after this season.

“We’re having constant conversations with Jarrad and his manager,” he said.

The sixth-placed Swans can finish in the top four but they’ll need to defeat Carlton then rely on both Richmond and Port Adelaide folding, against St Kilda and Gold Coast respectively.