“I don’t worry about the four in a row, I mean, I don’t really care,” Hinkley told reporters this morning.

“I would have much rather won them but I really care about [it] this week, that’s the facts.

“Every stat is there to be broken at some point.”

Hinkley was more concerned with matching it with a Crows outfit he described as “the best side in the competition”.

“They are sitting top of the ladder for a reason,” he said.

Hinkley watched with awe last weekend when the Crows came from 50 points down to draw with Collingwood.

“There was some really scary stuff,” he said.

“You know what is coming (this week) and you expect the best, that is the crucial part for us.

“Defensively this year we have been incredibly strong. We are going to get tested to the max this week.”

“The signs are positive on all three of the guys,” Crows coach Don Pyke told reporters.

“We will get through training this morning and assess them from there.”

“At the start of the year there were a lot of questions around our midfield and their capacity,” he said.

“The growth of some of the individuals in there… and the way they have actually developed their game this year has been really pleasing.”

Power captain Travis Boak has publicly offered to tag Adelaide dynamo Rory Sloane, whose influence has been frequently dimmed by a hard tag from opposing teams this year.

“There is no doubt we will certainly look at that (tagging Sloane),” Boak said yesterday.

“He is a quality player for their side and if we can slow him down then it certainly helps our side too.

“There is no doubt that if I get given any role, that I’d be more than happy to do it for the side. 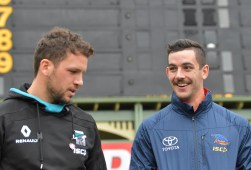 “If that means going to Sloane, that would be something I would love to do, I have done it before.”

Boak said the high stakes would add yet another element to a fixture renowned for intensity.

“You have just got to embrace the moment,” Boak said.

“They are a big game, there’s no doubt about that… we go into it as a normal game, but one that probably, for the fans, there is a bit more on the line.

“We just enjoy the moment. It’s a bloody good game to be involved in.”