The Dockers’ revival will be put to the ultimate test on Saturday night when they take on the ladder-leading Crows at Adelaide Oval.

Fremantle have surged into fifth spot after snaring six wins from their past seven games.

But they face a daunting task shutting down Adelaide’s star-studded forward line, which has become the most potent in the competition.

Betts has led the charge with 28.9, and the 30-year-old has continued his knack of producing freakish goals.

This weekend is the AFL’s Indigenous Round, and Walters proudly showed off the specially-designed jumper Fremantle will be wearing on Saturday night.

But he wouldn’t mind giving it away – as long as he can snare Betts’ jersey in the process.

“I snuck in a text today asking if I can swap jumpers with him at the end of the game, so we’ll see what he says,” Walters said.

“We’re pretty close. The Indigenous boys go on a camp every two years.

“Footy brings everyone together, and creates that bond. It’s good to catch up with players whether they’re indigenous or non indigenous.” 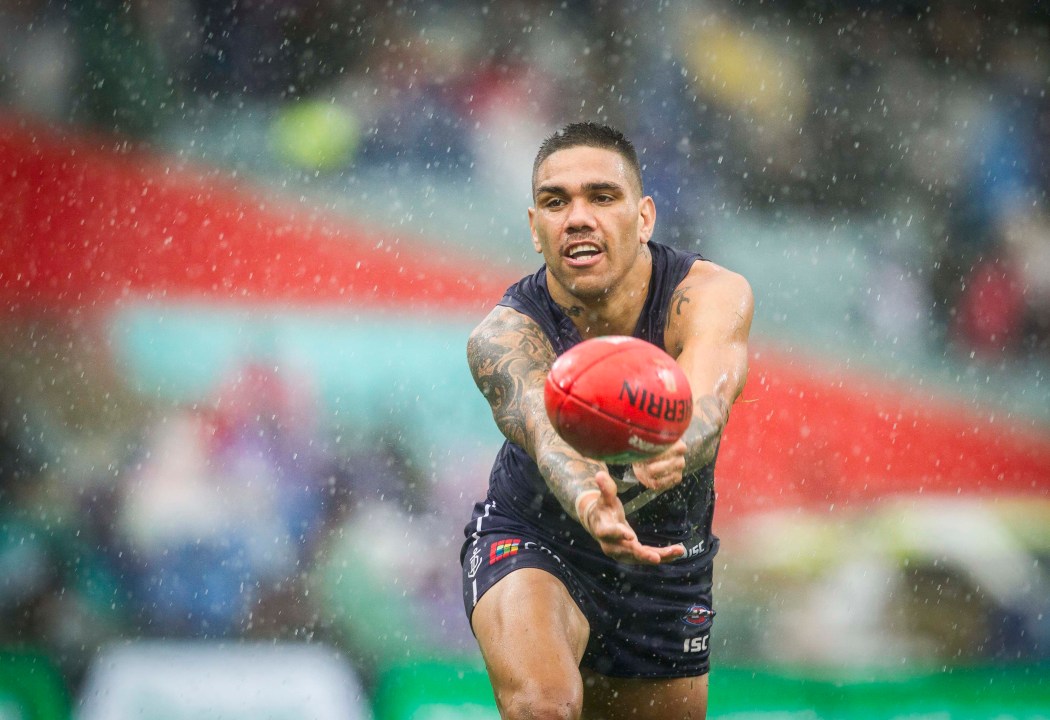 Walters has produced a glut of memorable goals during his 103-game career with the Dockers.

But even he is amazed by the sheer quality and freakishness of some of Betts’ pearlers.

“He does weird things where he can kick the ball from the pocket, or step two or three players and drive the ball off his opposite foot and kick a goal.

“Whether he practises it or not, he’s one of the few players who can master it.”

Walters has enjoyed a career revival since being switched to the midfield in the round-seven win over Essendon.

Playing as a small forward in the first six rounds, Walters averaged just 13 disposals and less than a goal per match.

But since being thrust into the midfield, Walters is averaging 30 disposals.

He also produced a match-winning three-goal burst during the third quarter of last week’s win over Carlton.

Walters said he has been loving life in the midfield.

“It’s somewhere I played as a kid, and really enjoyed it because you get that freedom,” Walters said.

“It’s a new lease on my career I guess.

“I was in a bit of a form slump before that, but I knew something was going to turn around.”

But Fremantle’s small forward stocks have ironically taken a hit in the process, with coach Ross Lyon denying Hayden Ballantyne returned from hamstring surgery too early after the forward suffered another injury in his first game back on the weekend.

Ballantyne will spend the next three to four weeks on the sidelines after re-injuring his left hamstring while playing for Peel Thunder on Saturday.

It was his first game back since undergoing surgery on the same hamstring during the pre-season.

Lyon is adamant Fremantle didn’t rush him back too early.

“We were really confident he was available to play. Hayden said he felt a million dollars.

“And hamstrings – there’s always that risk on return of about 20 per cent. So unfortunately he sat in that 20 per cent, but we’ll get him right.”

Ballantyne is out of contract at season’s end.

And with a history of hamstring injuries now conspiring against him, the 29-year-old faces a tough challenge to prove he is worth re-signing beyond this year.

But Lyon said Ballantyne was an integral part of the team, and hinted he would like to keep the 141-game forward at the Dockers.

“He’s an incredibly hard worker and he’s mentoring our young players well, so we look forward to his playing return,” Lyon said.