Sledging is the issue of the week in the AFL world.

Some have suggested it should be banned altogether, while the AFL Players’ Association are contemplating the implementation of an on-field code of conduct for players.

Sledging will never stop, though.

It can put people off their game – that is proven. And some of it can be quite cutting and funny.

Of course, there is a line, and vilification on the grounds of race, religion or sexual orientation is not on.

The alleged abuse Carlton captain Marc Murphy received on Saturday was distasteful and it has clearly impacted him and his family, so it should stop. 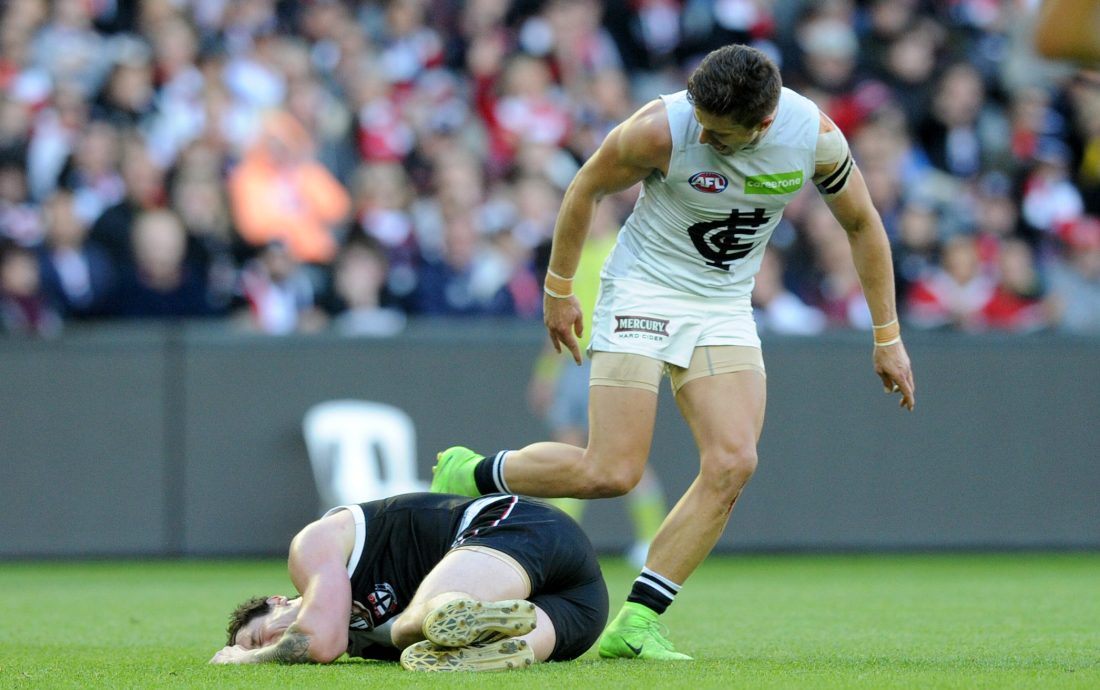 It has certainly generated a lot of attention – everyone in Melbourne is texting each other about it.

But those calling for bans or new rules are showing a lack of understanding of football.

Words are traded every week and before you sit and judge, put yourself in the position of a player.

They play a very emotional game and do it in front of tens of thousands of fans.

Coaches build players up all week, telling them to hit the opposition hard, tackle strongly, stand up for your mates and win.

I know because I told my players this sort of stuff.

Then they go out on the field, so determined and desperate to succeed, and may, in the heat of the battle, say something they would later regret.

I also told my players to beat their opponent, but not to humiliate them.

There is always another match and footy has a funny way of biting you on the backside.

Despite that warning, some of our guys occasionally said silly things. It’s what happens.

I have to say, as a society, we are so overboard with political correctness these days.

People don’t take into account the pressure footy players are under.

They aren’t always going to get it right.

One reason why this story has become so big is because we are all aware of it.

And a major reason in that is social media. It really can get rumours snowballing.

Someone with 5000 followers can post up anything they like, and it can quickly gain traction and be read by hundreds of thousands.

Rumours then change hands and often you get players not even involved mentioned.

There are so many trolls on social media and some of the stuff people get away with on the internet is just staggering.

Without social media, the Murphy story wouldn’t have spread and probably would have died a natural death on Sunday.

Another reason we are aware of Saturday’s alleged sledging is because of the advances in media.

Every game is now televised and there are so many cameras at every match. The people operating them are very good, too.

They pick up just about every interaction and are trained to be looking out for these sorts of incidents.

I coached Murphy at Carlton and only have positive things to say about him.

He is simply a quality young man and I think he has carried himself well through this whole saga.

To see him yelling at another player was out of the ordinary.

But I don’t blame him. If you don’t stand for something, you’ll fall for anything.

We’ve had a few sledging incidents in footy hit the headlines over the last year and what is clear is we are now living in a very different society.

There’s not much left you can say but you can be sure that players will be clever and think of material.

Why? Because sledging can give them an advantage.

And players will do everything within the rules to get that advantage.

Denis Pagan coached 344 games of AFL football with North Melbourne and Carlton, winning two premierships with the Kangaroos in 1996 and 1999.

This column was first published in The New Daily.