Murphy was incensed at St Kilda’s sledging during Saturday’s game, understood to be in reference to his wife, Jessie.

The Saints admitted on Monday they had overstepped the mark.

“My view is that we have plenty of rules,” McLachlan said.

“There is a line out there and I think, generally, it’s not breached.”

McLachlan said the response by St Kilda to apologise was sufficient.

“I think when you have the leadership of the St Kilda Football Club, with the coach and the captain saying ‘we got it wrong’, that is what we need,” McLachlan said.

“In the end, it’s about people owning their behaviours and being accountable to it and, occasionally, our players get it wrong.”

St Kilda captain Jarryn Geary said on Monday he had tried to contact Murphy, and admitted what was said was unacceptable.

Saints coach Alan Richardson also called Murphy, who said he was keen to put the drama behind him. 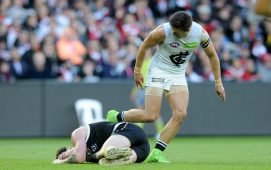 “St Kilda footy club have been good in getting (in) contact with me, so I think both parties are pretty keen to move forward,” Murphy said.

McLachlan said the AFL spoke to the two clubs on Monday and decided there would be no league investigation.

“(Carlton’s) decision was that they did not wish for further public discussion around the comments, as that only exacerbated the hurt,” the AFL boss said.

“But our position is clear – that players need to understand that such comments are totally unacceptable.

“There is a line, and that line is crossed when offensive and derogatory language is used about women.”