His team had just taken top spot of the AFL ladder. Just belted Fremantle by 89 points.

But everyone wanted to talk about Saturday night: Port’s clash against arch rival Adelaide.

The fixture will be an historic version of the local Showdown – which, for the first time, will be a genuine ‘top of the table’ clash.

“I’ll be careful how I answer this because I don’t want to be disrespectful,” Hinkley said post-match when asked about the grudge match.

“But I do want to enjoy today. And I want to leave the Showdown alone until that time comes.”

Hinkley was pressed further, asked how much he was looking forward to the encounter.

“It has been a pretty brutal off-season at times. So if you don’t enjoy what you’re supposed to, footy is too hard.”

But Hinkley was rapt for Port to have banked consecutive triumphs after missing the finals for the past two seasons.

“As a footy club, we are working really hard on that horrible word of consistency,” he said.

“This game is so hard to play at such a high level all the time but you have to turn up each week and be prepared to do that.

“This competition – the coaches all say it, not just me – it’s such a tough competition. And you get it wrong by a little bit and you lose games and you just can’t afford to lose.”

Dockers coach Ross Lyon says he’s sharpening his selection axe in response to Fremantle’s woeful start to the season, winless and last on the ladder after two rounds.

“I’m not separating myself from the players. The buck stops with me, I have never shied away from that,” Lyon said.

But Lyon said personnel changes must be made after his side folded meekly and rapidly against Port, conceding six goals within the initial 15 minutes and never fighting back.

Elusive Power forward Robbie Gray slotted six goals in the rout, kicking two and setting up another within 15 minutes of play to delight the 38,388-strong Port crowd. 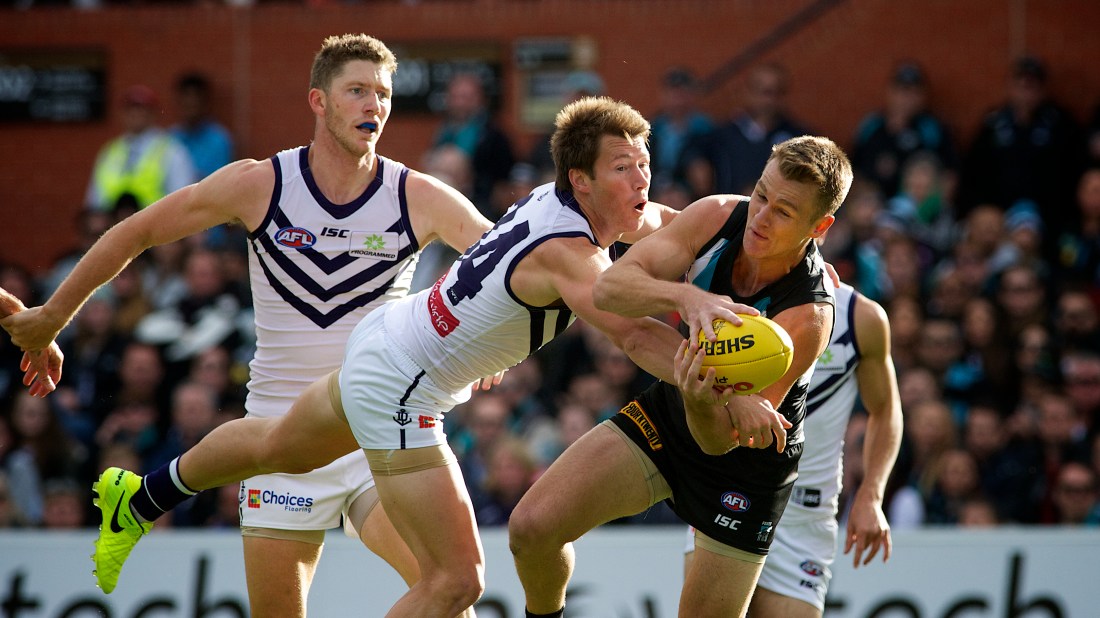 The Dockers cruelled their efforts with sloppy disposal – by halftime, when they trailed 11.8 to 3.3, the visitors had recorded 38 turnovers and 20 clangers.

Meanwhile, Carlton coach Brendon Bolton fumed at the one that got away after his side gave up a late lead against Melbourne at the MCG yesterday.

The Demons are the fashionable tip to make the leap into the finals this season, while not much is expected of the rebuilding Blues.

But a dogged Carlton held a slender three-point lead early in the final term before Melbourne ran over the top to record a 22-point win.

The Blues are winless after two rounds and Bolton was in no mood to settle for the gallant loss.

“It was one that got away … (we’re) disappointed, frustrated,” Bolton said.

“We have a high expectation of this group even though they’re young.

“We know they’re developing, we know they’re learning but we got ourselves in a position at three-quarter time to win a game and some errors really hurt us.

“It’s a really good learning opportunity but … (we’re) really frustrated that we didn’t get a result.”

Also getting away with a win was Geelong, whose ‘Dangerwood’ duo again showed their class under pressure, driving the Cats to a thrilling one-point victory over North Melbourne.

Midfield superstars Patrick Dangerfield and Joel Selwood were well held for most of the game but stepped up when the heat was on, gathering a combined 22 touches in the final term.

The brilliant comeback, sealed by George Horlin-Smith’s cool free kick, added to the collection of clutch wins under Chris Scott – in games decided by 12 points or fewer since 2011, the Cats have won 28, lost 13 and drawn one.

“Everyone, including us, rates the players who stand up when it counts the most, the highest,” Scott said.

“Clearly, if those two play well, we’re a hard team to beat.”