AFL chief executive Gillon McLachlan said there was no compelling reason to push back the start time of the match, which will be played at the MCG on Saturday, September 30 – after last year slipping out to October.

That is despite admitting earlier this month the move had broad fan acceptance, with several AFL captains including Scott Pendlebury, Nat Fyfe and Joel Selwood also offering support.

It has been argued a later start could grow the audience, and therefore sponsorship.

“There is a wide range of views about our match time for the grand final,” McLachlan said in a statement.

“After taking in all the feedback from the widespread debate in recent weeks, it was the recommendation to the (AFL) Commission that there was still not a compelling reason to alter the start time for the high point to our season.”

He later told 3AW a twilight decider remains firmly on the table, saying: “I don’t want to revisit it like this every year but I guess what I’m saying is it doesn’t mean it’s going to be 2.30[EST] forever either.”

“There is a sense of inevitability. I think at some point it’ll be tried,” he said.

“We’ve had a good look at it this year and it’s not right … but I’m not trying to say this is forever either.

“I think what I’ve said is it’s inevitable in this broadcast cycle it’ll be tried.”

McLachlan says he could not yet guarantee a later start time would enhance the experience for fans.

“If you’re going to move and break tradition … you want to make sure every part of that move you’ve got buttoned down and you feel it’s going to be bulletproof,” he said.

“You couldn’t say every aspect of this is going to be tight, better, improved and clearly we need to lead on this.”

Every aspect of the event was considered, he added, right down to player performance, transport, profitability and the scheduling of related functions.

“It’s something that’s much better for television, sponsorship and viewership. I think at some point in time it’s going to change,” Clarkson told reporters.

“Maybe it’s just exploratory for a year or two.

“If it works, it could be a bonanza for the AFL and everyone involved in the game.

Richmond captain Trent Cotchin was non-committal when asked his reaction to the decision.

“Afternoon footy’s always nice when the sun’s out for whoever it is who’s playing,” Cotchin told Melbourne radio station SEN.

“I think when the AFL powers asked most of the captains, we all said if we’re in the grand final, we don’t really care when it’s played.”

The decision comes as the league prepares for tonight’s AFL grand final rematch, with Western Bulldogs coach Luke Beveridge insisting personnel changes to both teams means they are treating the grudge match as just another game.

There’s been a low key build-up to the clash at Etihad Stadium and Beveridge admits that’s the way his defending champion team likes it.

That may change when the Bulldogs unfurl their premiership flag pre-game, for the first time since 1955.

“We have a ‘just another game’ type mindset, which it really is, being round two of a new season,” Beveridge said yesterday.

“If you look at the personnel in both teams we’re pretty different from that last game last year, so there’s a lot of change.”

Sydney will have eight players missing from last year’s grand final line-up, with the likes of Dane Rampe, Isaac Heeney and Tom Papley out through injury while Tom Mitchell has joined the Hawks.

The Bulldogs have made seven changes from their grand final team with Dale Morris joining Jordan Roughead on the injured list and Clay Smith, Josh Dunkley and Toby McLean all omitted.

Ex-Magpie Travis Cloke, skipper Bob Murphy and Stewart Crameri are among their replacements.

The Bulldogs overcame a gritty Collingwood in round one, while the Swans opened their season with a 28-point loss to Port Adelaide in Sydney.

Beveridge predicted they would be stinging from the defeat.

“Port were quite outstanding and we know that Sydney will be keen to bounce back and we’ve got to be prepared for that,” he said. 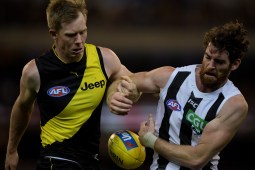 “It’s not often that Sydney drop two in a row and I’m sure they will be looking to claw their way back on to the winning side of things.”

While their last result went the Bulldogs’ way, the Swans have no fears about playing at Etihad, unbeaten there since 2012, having won their past 10.

Beveridge said it was time for his team to end that run, and make a statement on their home turf.

Young key defender Marcus Adams has replaced Morris, who is out for eight weeks with a broken leg, with Sydney presenting a dangerous three-pronged attack of Lance Franklin, Sam Reid and Kurt Tippett.

The Bulldogs have also bolstered their ruck stocks with Tom Campbell returning to support Tom Boyd.