Captain Taylor Walker is the latest Crow to come under a cloud, while for the Giants star midfielder Stephen Coniglio and key backman Aidan Corr have joined a burgeoning injury list.

Newly-appointed vice-captain Coniglio suffered a syndesmosis ankle injury in the Giants’ pre-season clash with North Melbourne on Friday and is set to miss the first month of the season.

Corr, who was also hurt against North, will miss the opening round clash at Adelaide Oval with a hand injury.

They join recruits Brett Deledio (calf) and Matt de Boer (hamstring) on the Giants casualty list, while midfielder Lachie Whitfield is suspended until round eight for breaching AFL anti-doping rules.

The Crows have their own injury headaches, with All Australian vice-captain Rory Sloane and fellow midfielders Scott Thompson and Brad Crouch already racing the clock to be fit for the minor round, while emerging defender Jake Lever is also battling a nagging hamstring.

But there is also a question mark over skipper Taylor Walker, who left the ground early during the Crows’ 39-point win over the Brisbane Lions in the JLT Community Series at Hickinbotham Oval on Saturday.

“He’s got a little bit of hamstring tightness that we will get looked at,” noted coach Don Pyke after the game.

Walker said today club medicos will decide whether he plays in the season opener on Sunday week.

“I will be honest, I will be guided by the PPT (physical performance team) because I have never had a hamstring (injury),” Walker told radio station Triple M.

“I’m backing the doctors in to make a clear and good decision.”

Walker had kicked three goals against the Lions but didn’t feature after three quarter-time.

“I left the ground with a bit of tightness in the hammy and pulled up really well, so good signs early,” he said. 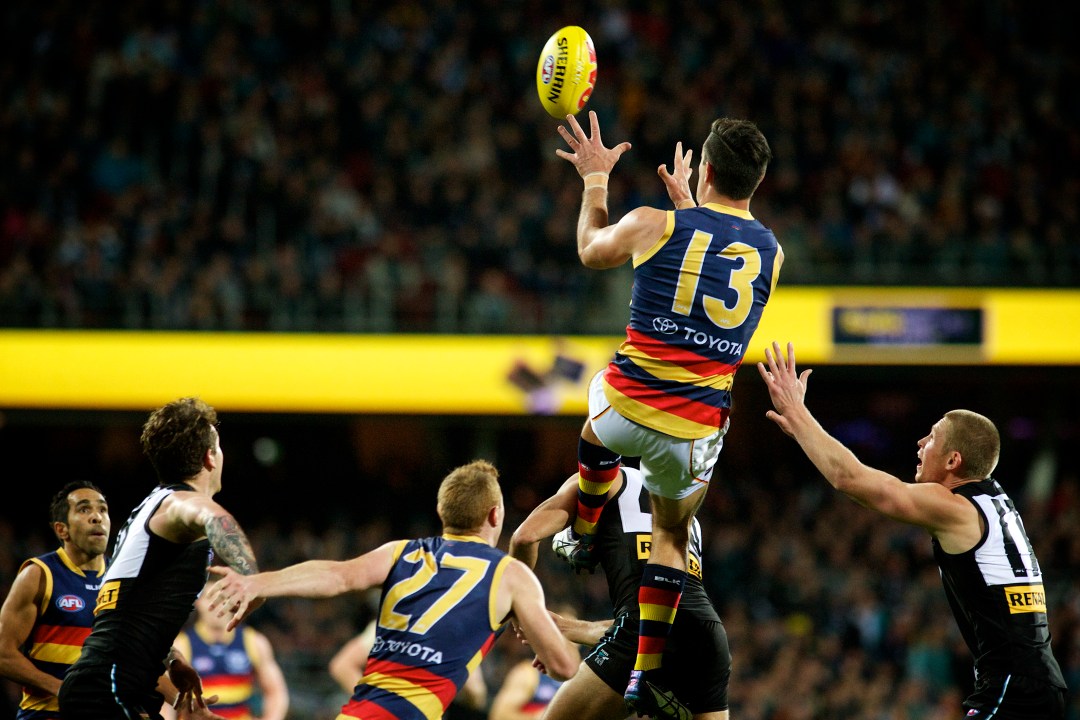 Tex Walker is the latest Crow under a cloud. Photo: Michael Errey / InDaily

For the Giants, the loss of Coniglio will be keenly felt as he was the Giants leading possession getter and contested ball winner last season.

Giants’ head of athletic performance David Joyce said Coniglio would spend the next two weeks with his foot in a protective boot.

“We’re confident that with the right treatment he’ll be back on the field in a bit over a month,” Joyce said.

He will have his hand in a splint for the next fortnight.

Corr suffered an unusual injury to the capsule at the base of his hand, though scans revealed he didn’t break a bone.

There was better news regarding the round one availability of three of the club’s most important forwards, though two of them will be lighter in the pocket.

Key forward Jeremy Cameron was reported for striking the Kangaroos’ Scott Thompson during the final quarter of last Friday’s game.

The Match Review Panel ruled the strike was intentional with low impact to the body,

With an early guilty plea Cameron can accept a sanction reduced from $1500 to $1000.

All Australian half forward Toby Greene was offered an identical reduced sanction for accepting an early plea, after he was cited by the MRP following a fourth quarter incident against North’s Sam Wright deemed as misconduct.

Veteran forward Steve Johnson is expected to be available for round one after getting concussed in a clash of heads last Friday and not returning to the field after quarter time.

Meanwhile, Fremantle’s forward stocks have taken a huge hit on the eve of the season, with goalsneak Hayden Ballantyne and young spearhead Michael Apeness set for lengthy stints on the sidelines.

The Dockers were initially hopeful Ballantyne would only need to spend three to four weeks on the sidelines.

But with surgery now necessary, Ballantyne will miss between eight to 10 weeks.

And in a further blow to the Dockers, Apeness has been ruled out of action for six to eight weeks after tearing the posterior cruciate ligament in his left knee during a WAFL practice match.

Ballantyne’s manic pressure will be hard to replace, and his absence will place further heat on fellow small forward Michael Walters.

The retirement of Matthew Pavlich, and the departure of medium-sized forward Chris Yarran over the summer had already robbed the Dockers of some of their depth.

Yarran quit the club after being charged over two separate assault incidents.

But the arrival of former GWS forward Cam McCarthy and ex-Cat Shane Kersten has given the Dockers plenty of optimism heading into the AFL season.

The Dockers start their season at home to Geelong on March 26.