Pavlich will notch his 350-game milestone in next week’s home clash with Sydney, and he plans to play three more games after that before heading off into retirement.

The 34-year-old has been remarkably durable throughout his 17-year AFL career, but his body has paid a heavy price.

Nine operations, disc bulges down his spine, and several concussions have all taken their toll.

South Australian-born Pavlich has dedicated much of his adult life to making sure his sore body got the line every week.

And there’s no thought whatsoever of squeezing another AFL season out of himself.

“I respect my body, so enough is enough,” he said.

“There’s significant things there I’m going to have to take care of (in the future). You pay a price, no doubt.

“Hopefully (in future years) I’m able to run around with the three kids – the third child’s not too far away.

“And hopefully I’m able to stay fit enough to still look appealing to my wife.”

Pavlich will play only home games from this point on – meaning he’ll miss this week’s clash with the Suns on the Gold Coast, and the round 22 match against GWS.

The six-time All-Australian revealed he offered to quit earlier this season after Fremantle crashed to a 0-5 record.

But he was talked out of it by coach Ross Lyon and football operations manager Chris Bond.

Pavlich is the only WA-based player to have broken through the 300-game barrier.

The next best was retired Eagle Dean Cox, who reached 290 games. 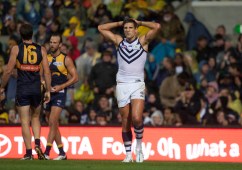 The loneliness of the AFL footballer

“I don’t think many people thought Tuck’s record was achievable.

“It just proves that someone here (at Fremantle) will beat 350.

“There’s an Olympics coming up, and records will be broken everywhere.

“It is a phenomenal effort (by Harvey), and it just goes to show his durability, versatility, and desire to keep doing it.”