On Saturday night, the Western Bulldogs played Geelong in the White Ribbon match, a game designed to raise awareness of domestic violence and violence against women.

But while the football world is casting light on the issue, it is also allowing dangerous, toxic and violent language toward women to be part of mainstream football conversations.

The most recent incident happened on last Monday’s episode of “The Rub” on Triple M.

Prior to the “Big Freeze” at the MCG, they crossed live to Collingwood president Eddie McGuire, who was preparing to take part. The event consisted of a number of high profile figures going down an ice slide and landing in a pool of icy water, all to raise money for the very worthy cause of research into Motor Neurone Disease.

It went as follows:

McGuire: In fact I reckon we should start the campaign for a one-person slide next year. [The Age chief football writer] Caroline Wilson. And I’ll put in ten grand straight away- make it twenty. [laugher] And if she stays under, fifty. [louder laugher]

What do you reckon guys? Who else is up there? I know you’re in JB?

Brayshaw: No, yep, straight in

Danny Frawley: I’ll be in amongst it, Ed

McGuire: Is Duck there?

McGuire: Duck’s in. Danny’s in — already spoken up.

McGuire: I could do an auction here today.

Frawley: I’ll actually jump in and make sure she doesn’t — I’ll hold her under, Ed.

McGuire: I reckon we could charge ten thousand for everyone to stand around the outside and bomb her.

McGuire: She’ll burn you like everyone else, mate. She’s like the black widow. She just sucks you in and gets you and you start talking to her and then BANG! She gets you.

Brayshaw: If you ran that auction from down there, I reckon you’d start grabbing some bids out of the seats too. There’d be money piling in everywhere

McGuire: It’s be magnificent. I think we should do that next year. It’s all good for footy.

Bloody oath indeed, though I suspect for entirely different reasons.

The first notable thing about this is, of course, that is is absolutely awful. These are some of the most high-profile men in football joking about hurting one of football’s most prominent women.

While McGuire and co were undoubtedly joking, the underlying attitude is dangerous: it reenforces the attitudes of those who are willing to take their hatred of women beyond a “bit of banter”.

The image of a woman being held under water against her will while people jump on her body is a horrifying picture of violence. It is nothing less.

And make no mistake, the damage McGuire and co are doing by normalising attitudes of disrespect and violence toward a woman does more harm than a thousand themed matches and white ribbons on uniforms do good.

The other notable thing about this incident is that it happened a week ago, yet (until yesterday) had received very little coverage.

How was this missed? How has violent language against one of the most prominent women in football been so accepted?

I absolutely count myself as part of the problem here — I’d rather not endure Triple M’s football coverage, so I don’t listen to it. But without attention from people who care, this sort of thing goes on unchecked. By ceding these airwaves to those with these attitudes, we allow them to survive and to thrive. 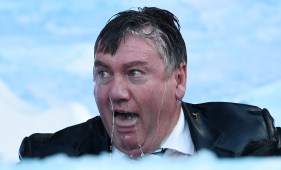 Heavyweights in hot water in AFL's day of recriminations

At some point, enough has to be enough.

If the AFL and its clubs are genuinely committed to doing something about violence against women, they need to genuinely respond to this, and not just brush it under the rug. This is absolutely unacceptable. Something must be done.

Erin Riley is a Sydney-based writer and journalist. This is an edited and updated version of a piece that first appeared on her website erinriley.com.au and is reprinted with permission.