Roughead’s career is on hold after a routine full body scan showed the melanoma he had removed from his lower lip in July last year had returned and spread to other parts of his body.

The 29-year-old four-time premiership star, who missed two games last season after his initial melanoma scare, will undergo a biopsy to determine the best form of treatment.

“It’s very serious – it’s extremely serious. Any form of cancer is … it’s going to be a bit of a tough road for him,” an emotional Lewis told Fox Footy last night.

“It hit him hard … we both had a bit of a cry. No words were needed but the seriousness of it would break anyone down, no matter how strong or fit you are.

“When he first got his scare with his lip, it was probably a little bit of an unknown and he probably didn’t really know how to react but certainly the news he got yesterday has shaken him up.

“Probably in his head, he thought he was over it because he had a scan six months ago and nothing showed up.

“But obviously, the scan this time showed differently.”

Roughead informed his teammates of the setback on Tuesday after training.

Hawks football boss Chris Fagan said that depending on the biopsy results, Roughead could be facing months of treatment.

“Jarryd’s health is the most-important issue at this time,” Fagan said.

“His long-term playing future is very much secondary to that and is not even a consideration at this point in time.

“This is a private medical matter and we would ask everyone to respect Jarryd and his family’s request for privacy during this time.”

Hawthorn must quickly pick up the pieces after the shock news, with a match against Sydney on Friday night at the MCG.

“But as harsh as it is, you’ve just got to move on in a way. I think Roughy would want that.

News of Roughead’s diagnosis sparked an outpouring of support from the AFL community.

“Roughy is a close friend of mine and it’s a bit distressing,” Western Bulldogs coach Luke Beveridge said.

“I don’t know the detail about it but I did see the headline.

“He’s got enormous courage and support around him … I hope he’ll be fine. 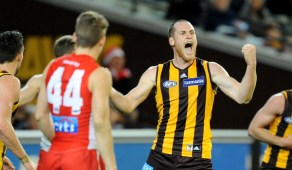 Roughead was the second overall pick at the 2004 draft, after Richmond top pick Brett Deledio.

“My thoughts and prayers are with the big fella, and it’s disappointing it puts footy into a fair bit of perspective,” Deledio said.

“We played a lot of footy through the under-16 and under-18 carnivals, so we became pretty close mates and still keep in regular contact.

“I’ll be reaching to him to see if I can support him in any way.”

Roughead hasn’t featured for the Hawks this season after knee surgery in February.

The veteran of 231 matches was making good progress in his recovery from the knee injury, having returned early this month to training.