The 27-year-old Power skipper added another year to his deal which will ensure he plays on to a 13th season at Alberton.

Boak, who turned down the advances of home-town club Geelong in 2012 to stay at Port, said any chances of him leaving the Power ended back then.

“Ever since I made the decision to stay at Port Adelaide a few years ago I thought I’d be a one-club player and this is a great vote of confidence in me from the club,” he said. 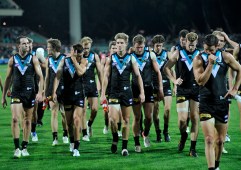 “While we didn’t have the year we wanted you can tell how hungry the boys are out on the track to have a good 2016.”

Boak played every game in 2015 as the pre-season flag fancies tumbled down the ranks to finish ninth.

He will lead Port’s efforts to return to the finals in 2016.

Coach Ken Hinkley said Boak’s leadership was crucial to bringing through the next generation of Power players.

“We are very fortunate to have a captain of Travis’ character at our club,” Hinkley said.

“He sets the standard for the boys and they follow.”

Boak has played 177 games for Port Adelaide and won the club’s best and fairest in 2011.