It’s the upshot of live bidding, a complicated new system that looms as a major talking point at the Tuesday night national draft in Adelaide tonight (Tuesday).

The AFL has introduced live bidding to ensure that players who are nominated from the northern state academies or as father-son selections are picked at the right value.

A good example of what the league wants to prevent is Isaac Heeney going to Sydney in last year’s draft.

Under the old system, the Swans were able to recruit Heeney, one of their academy players, with pick 18.

If the new system was in place, Heeney would have cost Sydney the equivalent of the No.2 draft selection.

“If he’s genuinely considered to be choice No.2, he should have that honour of being choice two,” says AFL talent manager Kevin Sheehan.

“So that’s what clearly happens this year.

“Clubs have to upgrade, using points, to go at the bid value.”

The first two picks in the draft should be straightforward, with Carlton near certainties to use pick No.1 on Jacob Weitering and Brisbane to recruit Josh Schache at No.2.

Then Melbourne will probably use the No.3 selection to nominate Mills, another Swans academy player.

If Sydney decide to match Melbourne’s bid – and they are certainties to do so – they will have to give up lower draft picks.

The AFL has used a mathematical formula to assign a points value to each draft pick.

So Sydney will have to give up a certain number of draft selections to match Melbourne’s bid for Mills at No.3.

The bidding system will only apply to the academy and father-son players.

“You have to simply upgrade, using enough points to take him at the bid that he’s bid at,” Sheehan said. 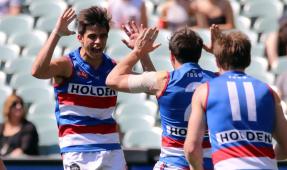 “We think it’s a fair system (and) it adds an exciting element.”

If Sydney match Melbourne’s bid and take Mills, then the Demons will have the next pick at No.4.

That means every time a bid is matched, the draft order will slightly change.

It is so complex that the AFL will need a computer program to make the system work properly.

Clubs will now work out of their own small private rooms, not altogether in the same hall, to give each recruiting team more privacy as they debate potential selections.

The AFL has said it will monitor the draft for collusion, in case clubs purposely do not nominate academy or father-son players so they go to their eventual teams at a much lower cost.

How live bidding will work

* Melbourne picks Sydney academy player Callum Mills with selection No.3
* Sydney decide to match the offer (this only applies to northern academy or father-son nominations)
* Each draft pick has a points value – in this case 2234 – and Sydney are given a discount of 20 per cent. That brings the pick value down to 1787
* Sydney need to give up their draft picks at 33, 36, 37 and 44 to have enough points to match Melbourne’s bid and take Mills
* Melbourne have the next pick in the draft at No.4