In our final wrap of SA footy news, we look at South Australians involved on AFL grand final day, hopefuls in the draft combine, some post-season moves, and name our SANFL team of the year.

Starting AFL Grand Final day, the curtain-raiser was a contest between the Australian Academy under 17s and an Allies Under 18s team.

Ferreira, who burst onto the scene in the Redlegs clash in the middle of the year, playing his usual defensive small forward role and kicked a second-half goal for the Allies. The Allies were under 18s players eligible for the national draft from division two states – Tasmania, NSW-ACT, Queensland and the Northern Territory.

Of the Academy boys, Scharenberg (Glenelg), Parfitt and Graham (North), have all played SANFL league football this year.

Parfitt was the pick of the local lads, with his run and creativity on the ball. 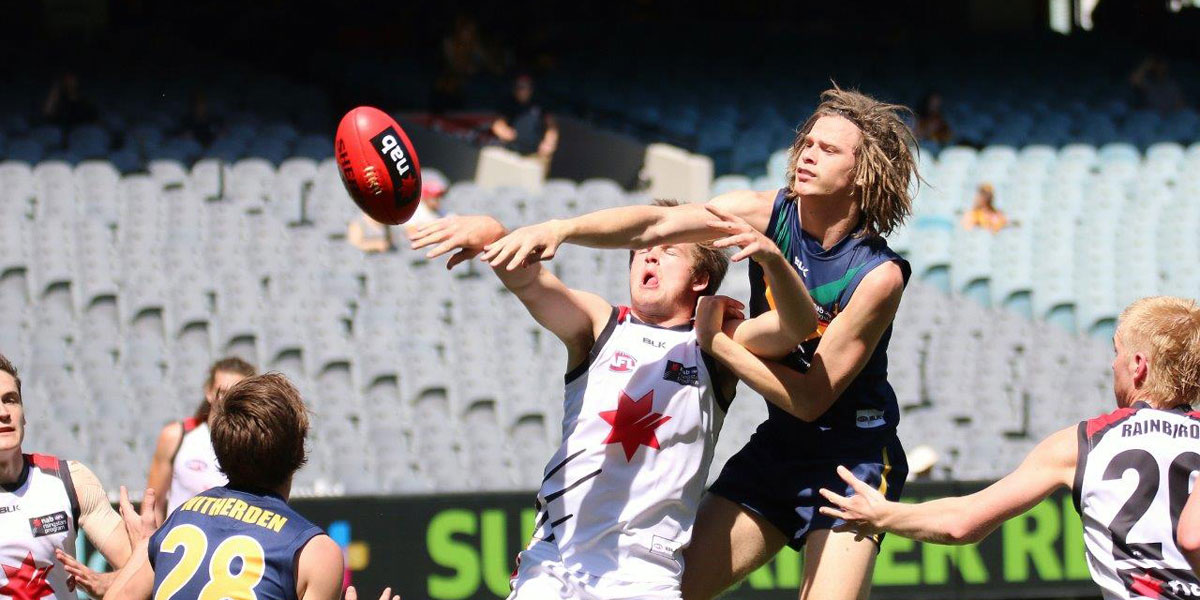 Peter Ladhams comes from behind to contest the ball.

SA successes and slips in the AFL Grand Final

There was a strong South Australian connection to Hawthorn’s history-making effort to become the fifth club to win three flags in a row at VFL/AFL.

Former Tea Tree Gully talent Ryan Schoenmakers secured his first premiership in the ’15 season decider, after playing in the 2012 loss to Sydney. He was impressive with 21 disposals and a goal.

Evergreen veteran Brian Lake was solid in defence as well and now has a third AFL premiership medallion as well.

For the West Coast Eagles, skipper Shannon Hurn was impressive in his post-match speech, but he had a day to forget on the field.

Perhaps the best of the Eagles defenders was former South Gawler Lion Sam Butler, who was playing in his third AFL Grand Final. Under constant pressure from the Hawks, Butler was cool and composed.

The Angaston Football Club has appointed Paul Sherwood as their new A-grade coach.

A former SANFL footballer who played in the 2008 Grand Final with Glenelg, he has a strong resume.

Sherwood’s coaching experience includes back-to-back premierships with Westminster in the SA Amateur League, time as a backline coach for the Queensland Scorpions Under 18 side and as stint as player/coach with the Langhorne Creek.

He played 190 games with Glenelg, predominately as a defender, after joining the Bays from Morningside in Queensland. 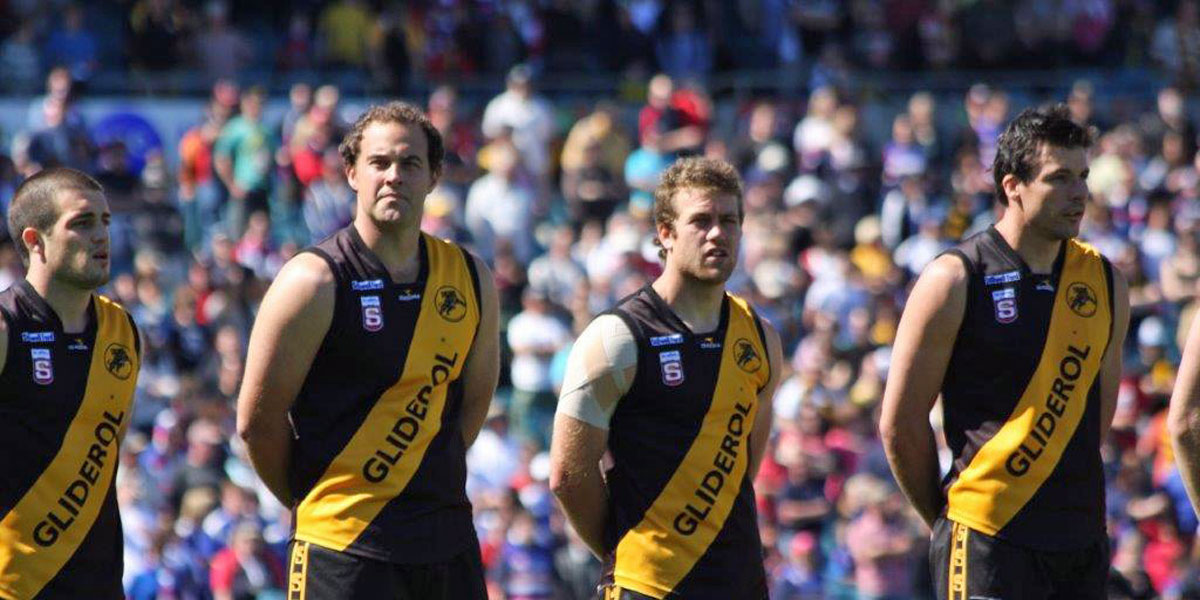 Considered unlucky not to the get a second chance at AFL level, Matthew Panos has capped his 2015 season with Norwood’s best and fairest honour.

It was a close count, with only 12 votes separating Panos from the tenth placed Patrick Levicki.

He received 62 votes, one ahead of runner up Tim “Doc” Webber, with Kane Murphy in third place with 59 votes.

He has spent the past few years playing in rural and community competitions at Tailem Bend, Padthaway, and this year with the Unley/Mercedes Jets in Amateur League Division II, where he won the competition’s best and fairest medal.

Harder chose Glenelg to rekindle his SANFL career due to his friendship with senior coach, Matt Lokan, who he played with at Alberton.

The cream of SA’s young talent will be among the 76 hopefuls at the National AFL Draft Combine starting tomorrow (Thursday) at Etihad Stadium in Melbourne.

First round draft candidate Ryan Burton and fellow North Adelaide player Cameron Hewett have both had injury issues, but are  expected to be fit to complete the majority of the exercise drills.

Among the 13-man SA group is former Adelaide Strikers community rookie Matt Allen from the South East of the state and lead- up forward Oleg Markov, the son of champion pole vaulter Dimitri. 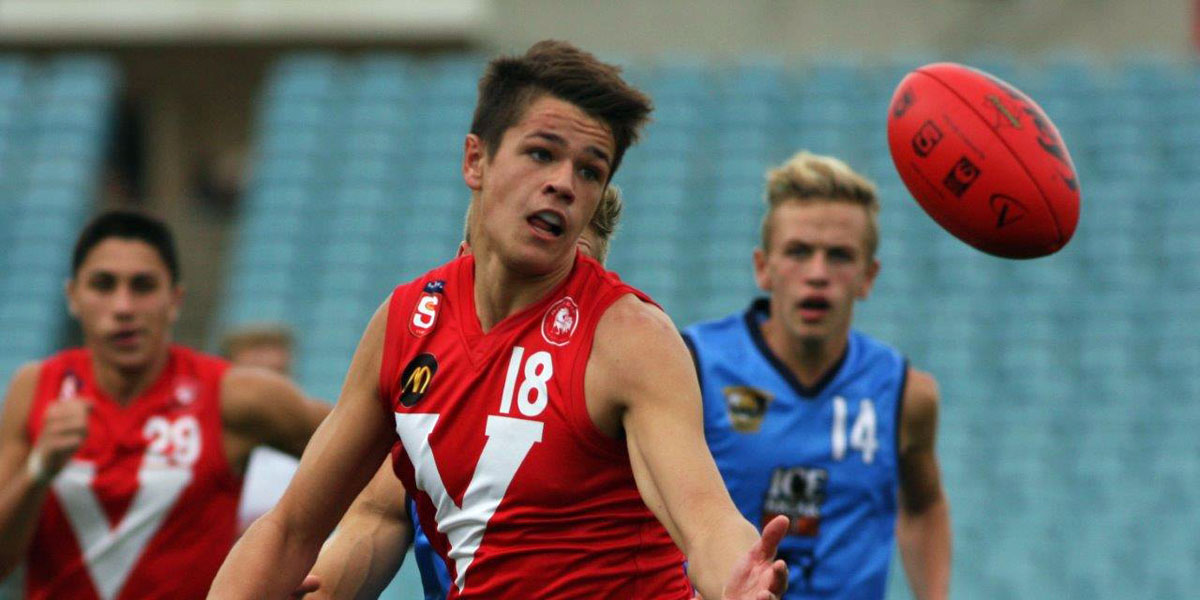 InDaily SANFL Team of the Year

As this in the last Grassroots column for 2015, here is my SANFL Team of the Year.

Jack Oatey Medallist Chris Schmidt was a selection as captain, with the evergreen Paul Thomas as his deputy after a superb second half of the year.

Note: I didn’t consider any AFL-listed player for selection.