In this week’s round-up of local footy, a father-son combination will take to the field in grand finals this weekend, bad luck for two Eagles midfielders, and the unusual journey of a Barossa league coach.

Out of the blocks quickly with three best on ground votes in the opening three games, Voigt was never headed on the night.

Voigt, who completed a pre-season at Central District, finished with 20 votes, two ahead on Heinjus on 18.

Voigt, 23, debuted for Eudunda as a 14-year-old under David Cluse, his school teacher Eudunda Area School at the time. He started playing regular A grade football as a 17-year-old.

His father Kerry, 46, is current playing in the B grade and was runner up to Southern Saints team mate Stephen Geister in the NEFL goal kicking award this year at that level.

Both generations will be playing in grand finals at Snowtown Oval this Saturday. 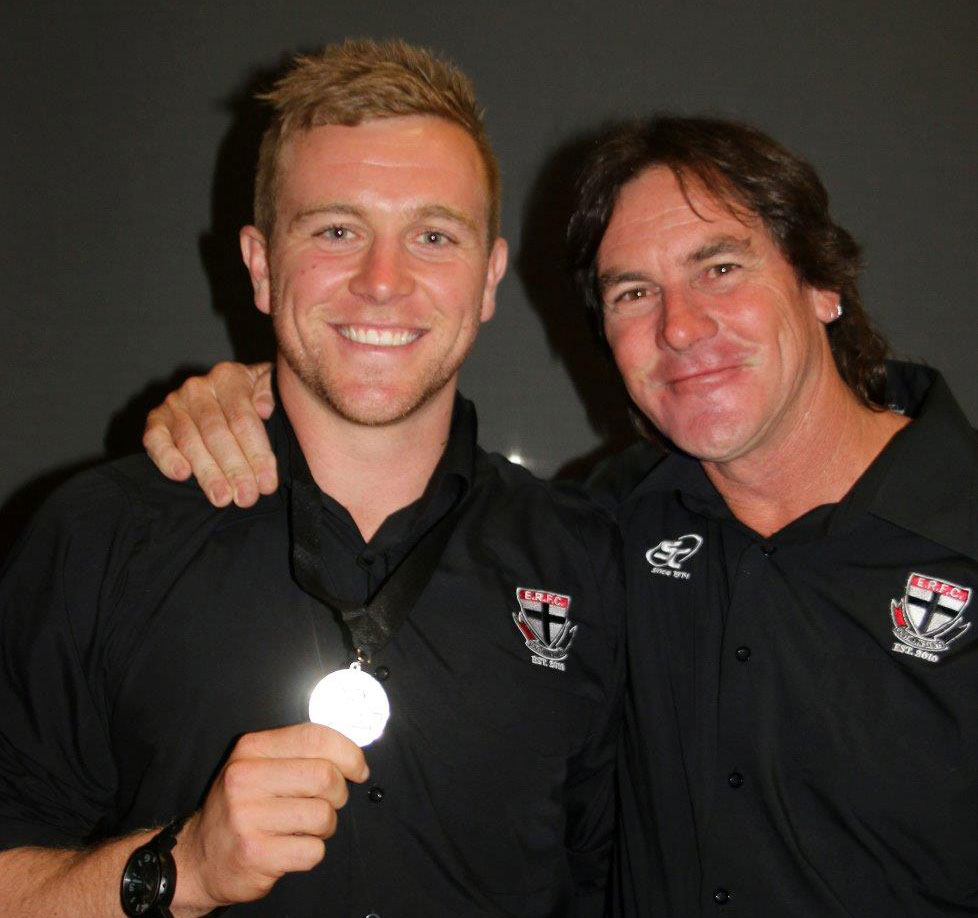 “We were the first father-son combination to play A grade football at the Southern Saints, a couple of years back,” Clinton Voigt said.

“I’ve always looked up to dad and I have been told that I play a lot like him in his younger days.”

He’s keen for one more piece of silverware to finish off the week.

“There is one more medal I would like to finish the year with.

“That would make it a very good week.”

Voigt works for an earth moving firm, the Downer Group, and has also trained the with Adelaide Crows development squad during the season.

Season over for Eagles pair

Two of the brightest talents from the Woodville West Torrens country zone on the Yorke Peninsula, Ardrossan’s Angus Rowntree and Kadina Bloodhound Angus Poole, injured their knees in the second semi-final win over West Adelaide.

“Gus Rowntree has done an ACL on his right knee and is having an operation as we speak (Tuesday, 15 September) and Angus Poole’s knee problem is a MCL,” Eagles coach Michael Godden confirmed.

“Rowntree’s is a 12 month rehabilitation and for Pooley there is a three month period to repair it.”

The Eagles will miss the duo as they push for the premiership.

“They are key components in our midfielder rotations,” Godden said.

“As I have said previously Gus Rowntree is one of the best inside players in the SANFL currently.

“He would be gutted at the moment, as he also missed our 2011 flag win pneumonia.

“Pooley had played every game this year and he’ll be missed as well.

“We don’t have direct match ups in the reserves to replace them, so there could be some structural changes to the team.” 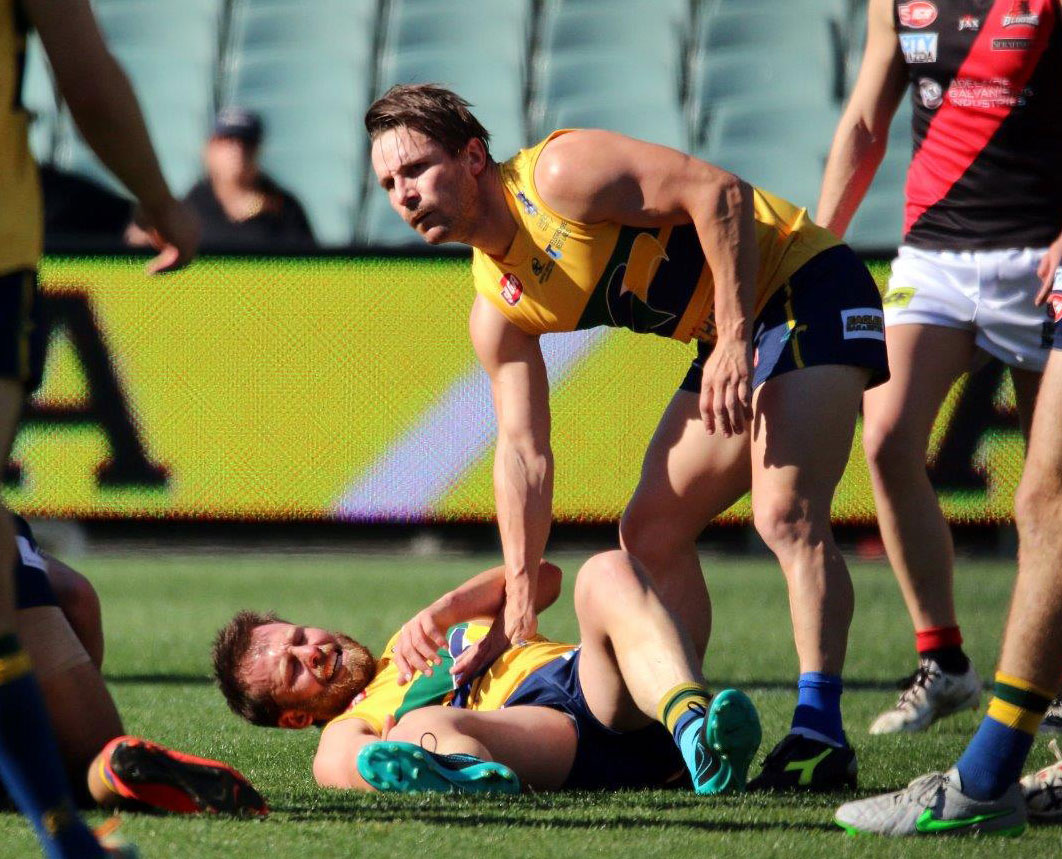 Minor premiers Woodville West Torrens will play Norwood for the under 18s crown this year.

The match will begin at 11.25am as a curtain raiser to the 2015 SANFL preliminary final on Sunday at Adelaide Oval.

The Eagles had just two losses during the minor round – against the two preliminary final combatants North Adelaide and the Redlegs.

Eagles coach Shane Reardon said there was not much between the two grand final teams.

Back in Round 2 the Eagles had a 20 point victory, then in Round 13 Norwood turned the tables getting up by one point. In the Round 18 contest the Eagles won by four points.

From Blackheath to the Barossa

Blackheath in the Blue Mountains about an hour west of Sydney seems an unlikely home town for a senior coach in the Barossa Light and Gawler football competition.

Nuriootpa coach Darren Reeves’ journey to this Saturday’s BLG grand final is a fascinating one.

His first passion is cricket. As a 15-year-old he moved down the hill to play in a B grade title with the Penrith Cricket Club.

The wicketkeeper-batsman would play Sydney grade cricket the following year and progress through the grades at NSW state level at the end of the Phil Emery era and beginning of Brad Haddin’s incumbency behind the stumps.

He came to Adelaide in 1997 as part of Cricket Australia’s academy under Rod Marsh, alongside the likes of Nathan Bracken and David Hussey.

He met his wife, Linda, here and they initially moved back to Sydney, before a call from Jeff Vaughan was the catalyst to return to Adelaide. He played district cricket with West Torrens, Woodville and a final season with the Northern Jets, along with the Redbacks in second XI fixtures. 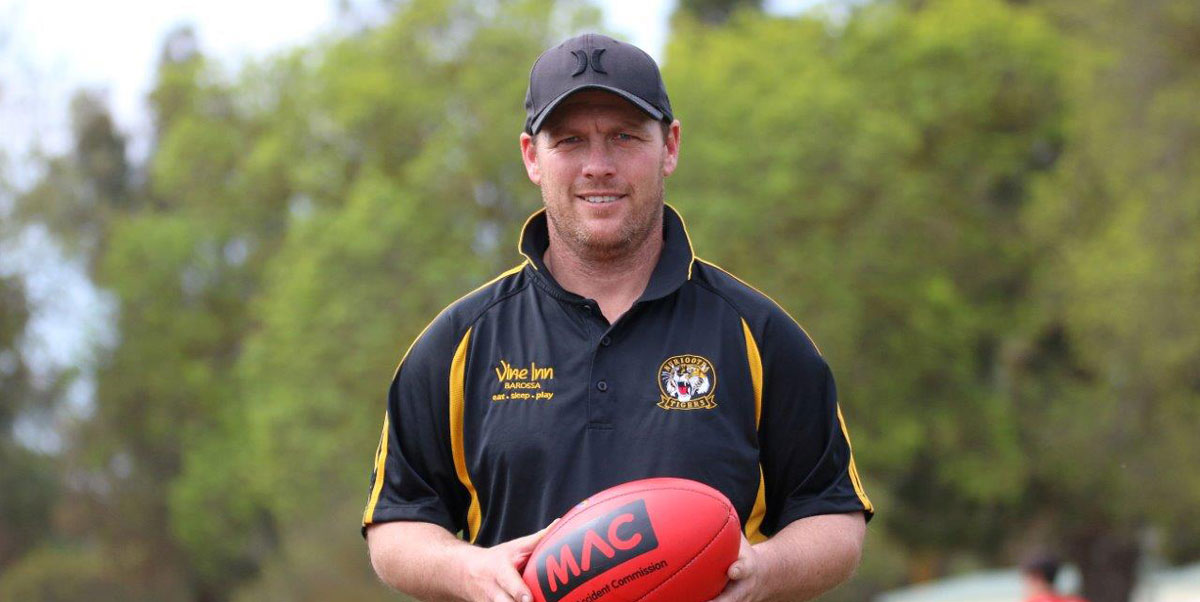 “I was working at Retrovision with a number of the Central District boys, including Radlee Moller and Quinton Graham who had been a part of the early success at Central District,” Reeves explained.

“My boss, Paul Mann got me involved in the Salisbury Football Club in 2004 and I just loved the football atmosphere and camaraderie from the beginning.

“I was the runner for the first week and then it was suggested that I play.

“I started in the C grade in my first game, played in the Bs in my second and a couple of weeks later I was playing A grade football.

“That’s where my connection with (his opposition grand final coach this Saturday) Damien Herzick starts.

“He was my first A grade coach and I had two years under him.

“Damien was fantastic for me, because he just let me play.”

Success was forthcoming as a player, as Reeves won a Salisbury Football Club A grade best and fairest in 2006 and then co-captained a premiership against Para Hills.

Former Crow Eddie Hocking was the person who helped Reeves into the coaching caper when he arrived at Salisbury.

“Initially I tried coaching the twos and playing A grade, but that was too difficult,” Reeves explained.

“So I gave playing away and just coached.

“After a season as Eddie’s assistant, I took the senior role.

“We played in a grand final in my second year (against Kilburn), but the next two we just were treading water.

“(Twice Barossa District premiership champion) Jamie Sibbick was a wonderful deputy and sounding board at Salisbury.

“Seamus Schutt is a good friend who tells it straight, while it is wonderful to have a guy like Allan Norton available to impart his football knowledge and wisdom as well at Nuri.

”‘I love sitting down and picking the brains of the guys like Henry (Slattery) and Jay (Nash).”

Reeves has proved to be an astute coach, showing that coming from a non-traditional background is no hindrance to success.

Two young Bulldogs, Kyle Presbury and Wayne Milera, delivered in style for Central District, kicking critical final term goals to push their team to a five-point win over Port Adelaide in the SANFL semi-final on Sunday.

Both were members of the Under 18s state program with Brenton Phillips this year.

Milera’s third goal in the last quarter proved to be the clutch major that helped his side over the line.

He admitted to nerves when lining up for the crucial kick at the 20-minute mark, but insists he was confident he’d get the right result.