In this week’s round-up of local footy news, a crop of locals invited to the AFL Draft Combine, SA Country thrashes WA, a SANFL veteran to retire, we remember the career of a SANFL pioneer, and we capture another crunching bump in country footy.

No mature aged SANFL footballers have been invited to attend the 2015 AFL Draft Combine this October.

They were overlooked in the crop of 76 players invited to the combine at Etihad Stadium, but the group includes 12 from South Australia’s Under 18s program.

“This is what I expected from this year’s crop,” said Brenton Phillips, the SANFL talent manager and state Under 18 coach.

“This 12 all have the potential to be drafted this year.

“Mason Redman is the one that has jumped up into calculations after his strong performances in the championships games.

“Oleg Markov proved the rule to give selected 19-year-olds a chance at this level is important.”

To attend the AFL Draft Combine, a footballer must be nominated by at least four clubs.

Upwards of 100 players will also be tested at state combines in Melbourne, Hobart, Adelaide and Perth.

The South Australian Country side made mincemeat of their WA Country opponents on their trip to Perth last Saturday.

“Everyone contributed,” Lubcke said. “Our pressure acts got us off to a good start and we had winners on every line.

“Our defence was frugal again and worked well as a unit.”

Despite the comprehensive win, Lubcke said the SA boys could have won by more.

“The margin actually undersold the team’s performance, as we should have won by four or five more.”

SA’s victory was all the more impressive considering the injuries incurred during the game.

“We had a couple of injuries,” Lubcke confirmed.

“Our main ruckman Scott Hunt received a couple of fractured ribs during the second quarter. Nigel James then stood up and led the ruck department of the remainder of the contest.

“Our captain Reece Francis went down with a knee injury. He had been excellent in the first half before this.”

Since this annual event started four years ago, the SA Country side are undefeated.

The unique career of Todd Miles at league level will come full circle and be completed at the end of the SANFL 2015 campaign.

Coming from the Adelaide Plans Football League Miles has enjoyed a full career, despite a couple of false starts to his SANFL calling.

His first club was the Port Adelaide Magpies, where he played a handful of reserves games, before travel became an issue.

At his first attempt with the Eagles, the travel problem again appeared, before he finally debuted against the Bulldogs in round one of the 2009 season.

Before making it into SANFL league ranks, Miles had played in an A grade premiership with Hamley Bridge (2004) as a teenager and a played a big role in the Mintaro-Manoora’s 2008 title in the neighbouring North Eastern competition.

We first saw him as a tall and lean half back flanker and wingman, but Miles developed into an athletic high leaping ruckman/defender. 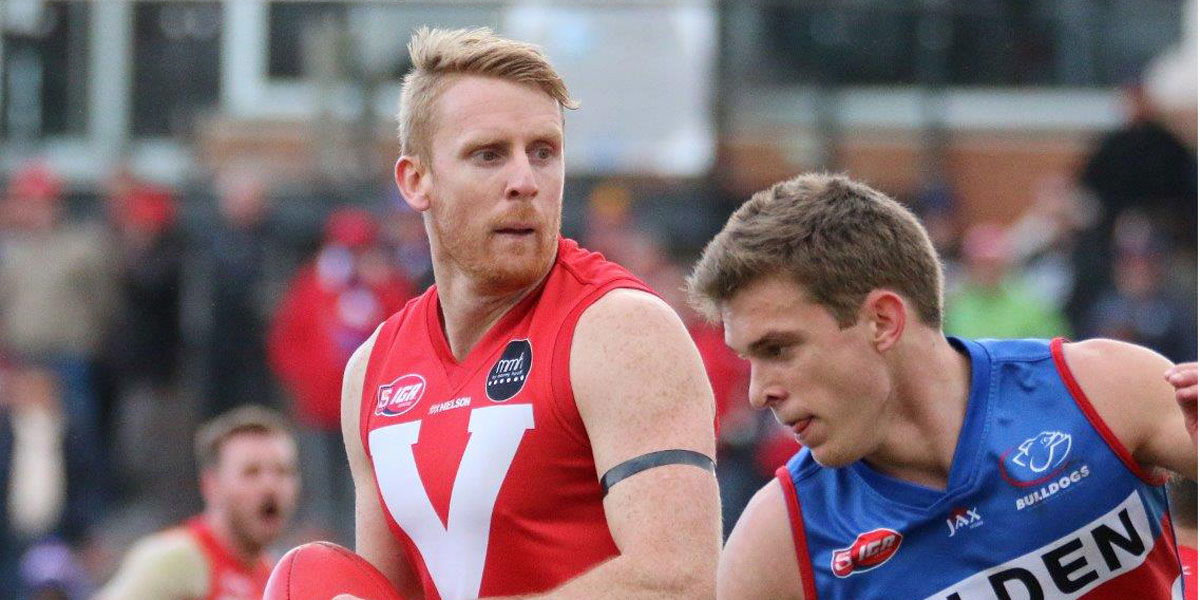 He won the SA Country championships “player of the tournament” (now called the Don McSweeny medal) in the Riverland in ’08 and went on to play state country representative football that year as well.

After a couple of seasons with the Eagles where Miles was a consistent league footballer, he was given the opportunity to move to Prospect and his career really flourished.

He went on to become a 100-game SANFL league footballer, captaining the Roosters to the 2013 Grand Final and winning the Barrie Robran medal (North’s best and fairest) in that year.

In 2014 Miles became on the few players in SA football history to add a SANFL state jumper to add to his SA country jumper.

You have got to love the physical nature of country football. Many would argue this is being stamped out of our game at higher levels.

I captured this snap at Manoora Oval, at the North Eastern Football League clash between the hosts, the Min-Man Eagles and the Burra-Booborowie-Hallett Rams.

A quarter of a century before late great Irishman Jimmy Stynes became a star on the football landscape, Robin Mullholland was a  pioneer of our national code.

I was reminded of Mulholland’s contribution after catching up with him at a Nuriootpa football club 40th anniversary premiership reunion two weeks ago.

From the tough working class streets of Belfast, Mullholland travelled across the world to Gawler in ’61 and his first connection with our national football code was at the South Lions as a teenager in 1963.

“For the first couple of years I would watch West Adelaide because there were a number of players with an Irish connection in the side,” Mullholland explained.

“In ’63, at the age of 18, I started in the B grade for South and after a couple of game they must have thought I had enough talent to play in the first team.

“We enjoyed a premiership that first year. I played on one wing for South – and one of the Bulldogs true greats, Sonny Morey, played on the other wing for our opponents, Gawler Central.”

After four more years and a second premiership in ’67, Mullholland decided to take up Norm Russell’s offer to venture down to the Ponderosa.

Between the 1968 and 1974 he played 112 SANFL league games and kicked six goals in the club’s historic first finals triumph at league level in 1971.

Long-term Central District CEO Kris Grand remembered Mullholland as bubbly, effervescent person who loved his football, was passionate about his training and was well liked around the club.

Mullholland would win a pair of best and fairest awards, in his first season in ‘68 and again in ’72 – the year he donned the SA state jumper three times during the final interstate carnival in Perth.

Mullholland expressed disappointment this event is no longer a part of national football. He vividly remembers roving against Victorians Leigh Matthews, Kevin Bartlett and Ross Smith. 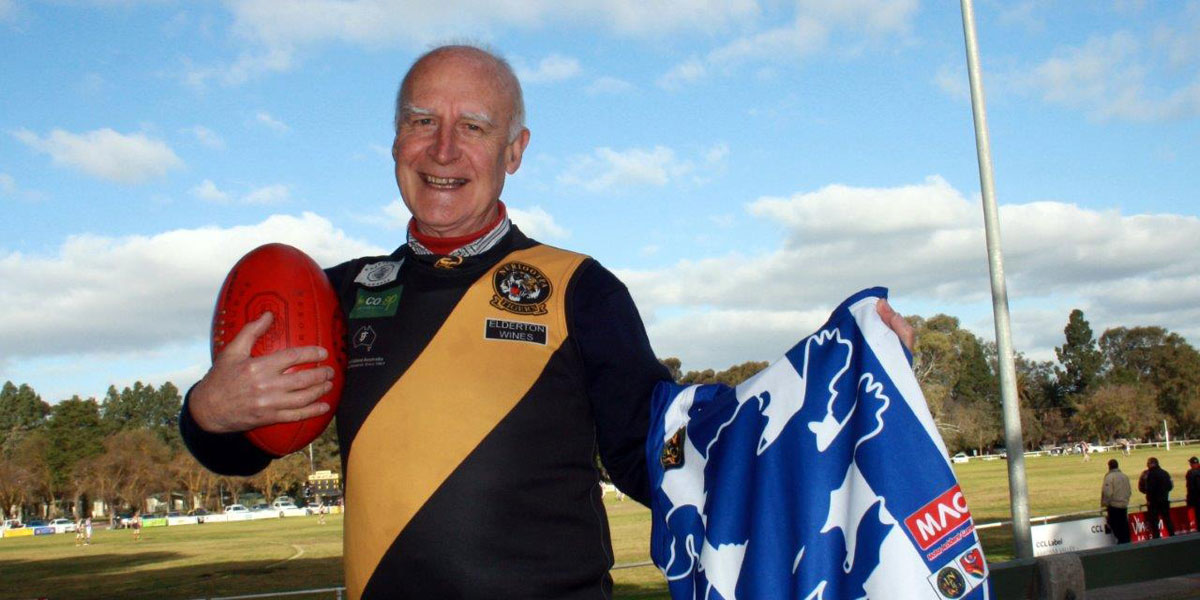 “‘Irish’ (Mullholland) was very determined, and he do everything in his powers to achieve victory,” team mate Peter Vivian said.

“Early in his career he’d often get 20 plus and couple of handballs.

“I’d drive him back home after training and suggest he learned how to handball.

“It turned into a competition between us about who would get the most handballs.

“His strength was his endurance and in the modern era he would have found a way to play at the top level.”

He moved to the Nuriootpa Football Club in the Barossa and Light competition as captain-coach in 1975.

Moulding a strong willed group of men together, Mullholland engineered premiership triumphs over Eudunda at Freeling Oval in his first year and then against Kapunda in 1976 at Angaston Oval.

A Mail Medal honour was achieved in ‘76 with 25 votes and in 1977, his final year in the Tigers black and gold, he shared the leading goal kicker award with Panthers backman turn full forward Trevor Smitham, kicking 62 goals as a rover, changing in the forward pocket.

A little known fact is Mullholland also played a second level of State football. While playing coach of the Elizabeth Eagles in the now defunct SAFA (South Australian Football Association) competition he travelled to Melbourne against played against the VFA in 1979.