There was a genuine “19th Man” moment during last year’s seesawing Crows season, according to Adelaide Football Club board hopeful Daniel Kiley. It came just on three quarter time in the team’s Round 9 fixture against Collingwood, a night game at Adelaide Oval.

“It was when everyone drowned out the siren,” argues Kiley, recalling the contentious goal awarded to forward Josh Jenkins that gave the home side a 14-point break in a tight game. The goal umpire didn’t hear the timekeeper call an end to play over the frenzied home crowd.

“That was organic, that was fans cheering because they wanted to cheer, not because there’s a flashing sign that said ‘Make some noise’,” Kiley laments.

“Supporters need to be trusted, rather than patronised.”

The 27-year old commercial lawyer, an associate with HWL Ebsworth (formerly Kelly and Co.), is perhaps the least recognised of the nine who nominated for the Crows’ first two member-voted board positions, which will be finalised at the club’s AGM at West Lakes tonight. 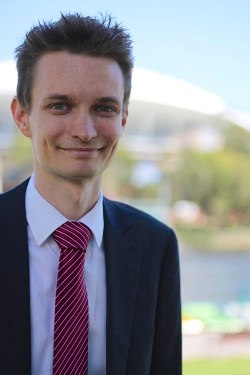 He has, however, run one of the most energetic campaigns, utilising social media and the internet – a potent symbol, perhaps, that he is the voice of a generation largely unrepresented in the club’s hierarchy.

“The line you sometimes hear from people critical of the club is it feels like a franchise, not a club,” says Kiley.

“That’s probably a bit too harsh, but it grates because there’s an element of truth.”

He shakes his head at the long-standing match-day graphics “telling you precisely when to cheer, as opposed to trying to lure you into it and letting you embrace it yourself”, and Chief Operating Officer (and former premiership player) Nigel Smart’s recent social media faux pas, in which he referred to the club’s supporters as “customers”.

“The ‘customer’ thing…he didn’t intend it, but it was telling. That sort of attitude feels like the problem,” Kiley reflects.

He believes the club has “started taking steps in the right direction and being a bit more consultative” under new CEO Andrew Fagan, but argues other clubs have had substantially more member involvement, with the Crows only now “tiptoeing down that direction” towards democracy.

But it’s a democratic process heavily loaded towards the Crows’ old-boy network, and Kiley concedes: “It’s a losing fight to some extent.”

“I clearly haven’t given up – I’ve been quite active and I wanted to give it the best shake I can.”

But the presence in the ballot of Crows’ captaincy great Mark Ricciuto – who has sat on the board filling a casual vacancy since last year and has been informally credited with orchestrating the club’s recent off-field shakeup – makes at least one of the two positions a fait accompli.

Kiley argues Ricciuto should have been appointed to the board, rather than nudging out independent candidates in a ballot.

“That didn’t sit exceptionally well with me,” he says.

“I know we’re not to win against that.

“If we’d have had Mark put straight into that spot — because the board clearly wanted him — I don’t think too many people would have had too much of a problem with that.”

Another former premiership player, Rod Jameson, has also nominated, making the two fan favourites the solid frontrunners to join the board. And, according to Kiley, it “does make the democracy process slightly…I don’t want to say ‘token’…but let’s say token”.

He says if Ricciuto had been elevated as a board appointment, “you could have Jamo and one of seven other people with outside ideas, different thoughts and different skills (and) it would be a much more interesting discussion we’d be having now”.

Whoever garners the most votes in the member ballot, which concluded on Monday, will win a two-year term; the runner-up is elected for a single year. But, as Kiley sees it, if the two ex-players are duly elected and choose to recontest, “you’d be pretty brave to run against them”.

“So the board could stay pretty static for a while after this…it’s slightly disappointing but it is what it is,” he muses.

“Right now the board does look homogenised, in terms of a bloc of older, successful business people — exactly the sort of people you want running a business that goes along with the football club – and guys that represent the football side of it…but as for the general supporter base and anyone outside of business people and retired footballers, there’s not a hell of a lot.”

While Kiley is driven by his zeal for the tri-colours (“You don’t do something like this unless you’re a big fan”), he isn’t averse to drawing inspiration from the least likely of sources.

“I think the obvious comparison is the next door neighbour down at Port Adelaide,” says Kiley, referring to the Power’s much-hyped match-day ritual at the Oval, with the strains of Never Tear Us Apart galvanising the fanbase, which has clutched the INXS anthem to its collective heart much like Liverpool supporters have Gerry and the Pacemakers’ version of You’ll Never Walk Alone. “We don’t want to just copy everything Port does (but) I’ve been thinking long and hard about why it is that worked — it’s clearly quite artificial,” says Kiley.

“But there was a seed planted and people were left to run with it; they played the song and got on with it. There was no-one saying ‘we want you to stand up and hold your scarves’ but it caught on.”

Though, he’s quick to add, it “works a lot better when you’re winning”.

The Crows kick off their competitive pre-season in an untelevised game against North Melbourne in Port Lincoln on Sunday.  If the team can recapture its winning ways with some consistency this year, Kiley (or ‘19th Dan’ as he’s dubbed his campaign) will be cheering loudly with the throng as it tries, entirely unprompted, to drown out the Adelaide Oval siren. But it’s likely, for now, he’ll be confined to his long-held season ticket seat, rather than watching from a corporate suite. The Crows board may be ready for change, but it may not be ready for the kind of change Kiley is advocating. At least, not yet.