Monday’s independent review report, commissioned after the Cape Town ball-tampering furore, highlighted Cricket Australia’s “arrogant” culture and noted “responsibility for that larger picture lies with CA and not just the players held directly responsible for the appalling incident at Newlands”.

The ACA today formally called upon CA’s board to act in light of The Ethics Centre’s “new and damning findings”.

“Lift the CA-board imposed suspensions on the three players effective immediately,” the ACA said in a statement.

CA chairman David Peever on Monday rejected the possibility of reducing the bans, saying after releasing the review findings that “the sanctions were imposed by the board after a very full and thoughtful process and so the sanctions stand, as I said several weeks ago”.

However, ACA president Greg Dyer warned the governing body that his organisation would be “relentless” in their bid to reduce the sanctions on the Test trio, who he described as “contrite”.

ACA chief executive Alistair Nicholson argued the punishments were handed down without a proper understanding of the climate and culture in which the players erred.

“We now have new information and that should be taken into account,” Nicholson said.

When asked about the possibility of legal action, Nicholson replied: “We just need to get through the first stage”.

Dyer stopped short of calling for Peever to resign in light of damning review findings about CA culture, noting it was a question for state associations, but highlighted the fact he had “some concerns about some of the rhetoric that was used throughout the course of yesterday”.

Dyer, who remarked earlier this year that “justice which is rushed can sometimes be flawed”, has been perhaps the most vocal and consistent critic of the bans alongside icon Shane Warne. 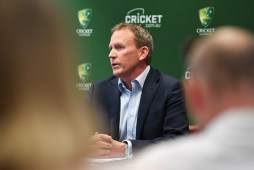 Ironically, the review’s most urgent recommendation was for CA and the ACA to establish a constructive working relationship within 30 days.

Last year’s bitter pay talks left a series of scars, according to The Ethics Centre report.

“People variously described the actions of both parties as being arrogant and aggressive, contributing to a toxic management and playing environment in which money is valued above fair play, and aggression wins the day,” the report said.