How is it possible for a group of elite professional athletes to forget so much in such a short time? The Australian cricket team by rights would have lost some sleep last night wondering about that.

In Brisbane less than a fortnight ago, in Adelaide during the weekend, the Australian cricket team demonstrated the importance of batting time in a Test match. In Brisbane, it had been necessary, to make a recovery from a parlous position – four out for 86 – and then again a dangerous 7 for 209 chasing 302.

In Adelaide over the weekend, it was patience and determination over two difficult batting days, combatting bounce and movement off the pitch to build what should have been an impregnable position.

Yesterday all of that accumulated recent experience went for nothing. Starting at a distinctly unhealthy four for 53 created by the Monday night-time magic of England’s Jimmy Anderson and Chris Woakes, the task was obvious. Occupy again. Bat time, inch the opponent out of the game and keep going for as long as possible in order to have the use of the freshest possible ball in the evening.

What did we see? A bunch of happy slappers carving away at whatever was offered without care for consequences.

They created a new record for the series. A 58-over innings. 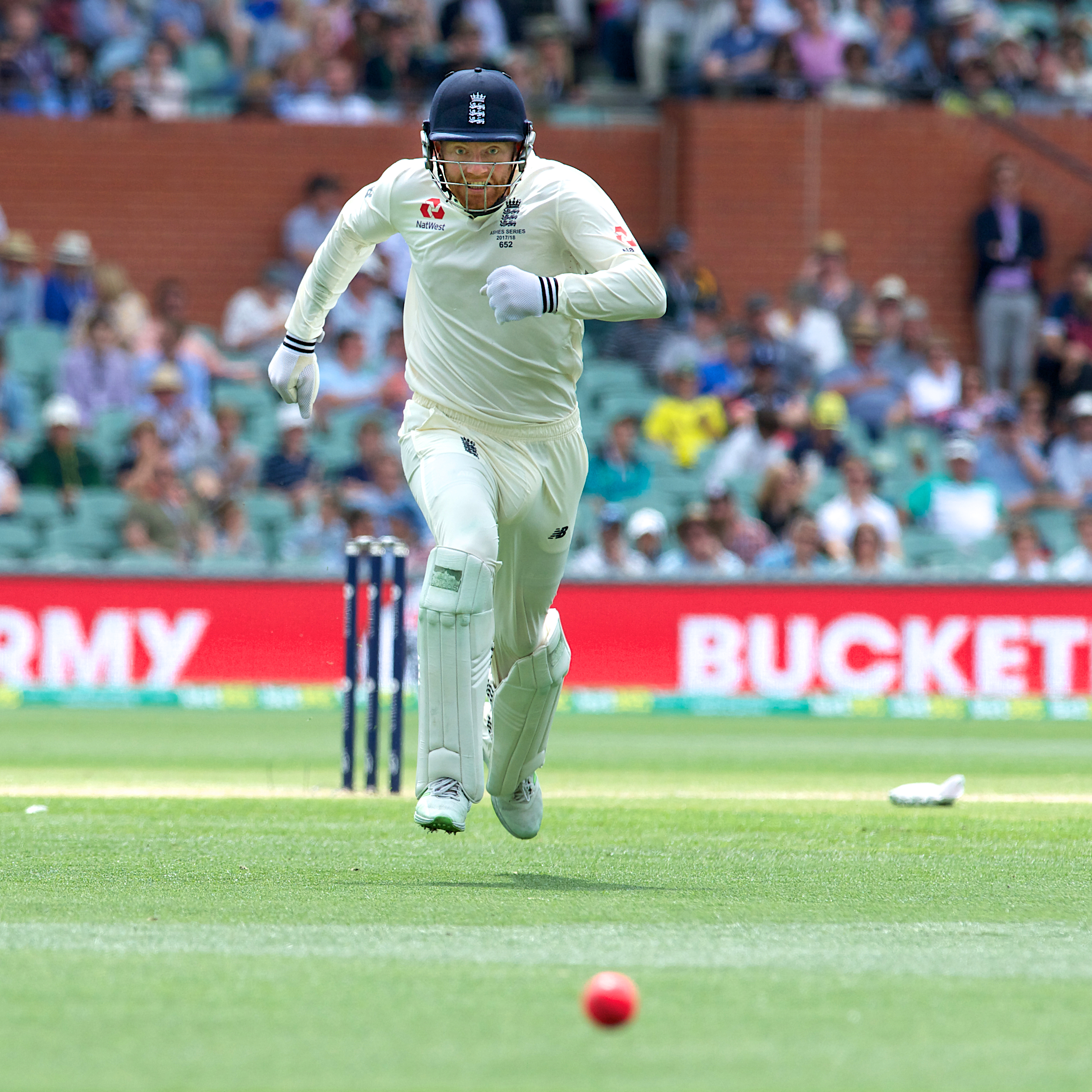 England’s paltry 76-over first innings seems to have seduced the Australians into thinking that, even after having been stunned on Monday night, nothing much mattered any more.

In the grandstands yesterday afternoon, the roars that usually accompany dismissals were mixed with groans at the folly of it all. Still, though, people were saying to one another that they supposed it would be all right, because it was still going to be a hell of a big total for England to chase.

Those who clung to that view may have been blanking out the increasingly audible vigour of the Barmy Army. On Monday I had wondered whether the second half of the England first innings might be the cloud as small as a human hand, lurking above the horizon. Less than twenty-four hours later, the Barmies were pretty sure the weather was changing, though it was yet too soon to hope. 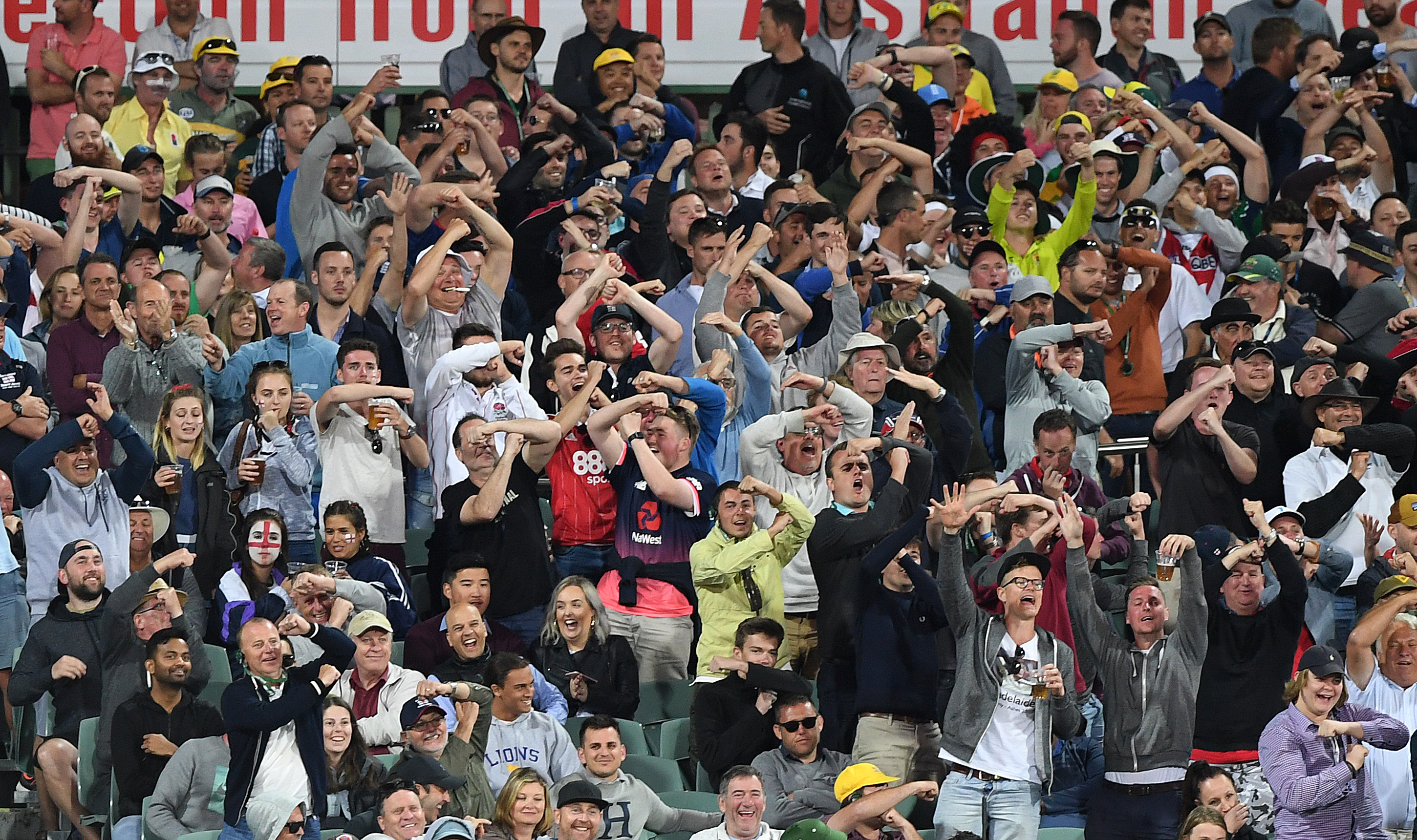 The Barmy Army mock Steve Smith by signalling a review – when Australia’s captain had none left to use. Photo: Dave Hunt / AAP

But night-time use of the new ball had been squandered – not that it had any prospect of being as fruitful as Monday night had been, when the much-maligned Jimmy Anderson has done what champions do, and seized the moment.

It is putting it mildly to say that Anderson and Chris Woakes are better-equipped to take advantage of evening humidity than the Australian fast bowlers. Anyway, humidity on Tuesday evening did not rise the same way it had done on Monday after sunset. 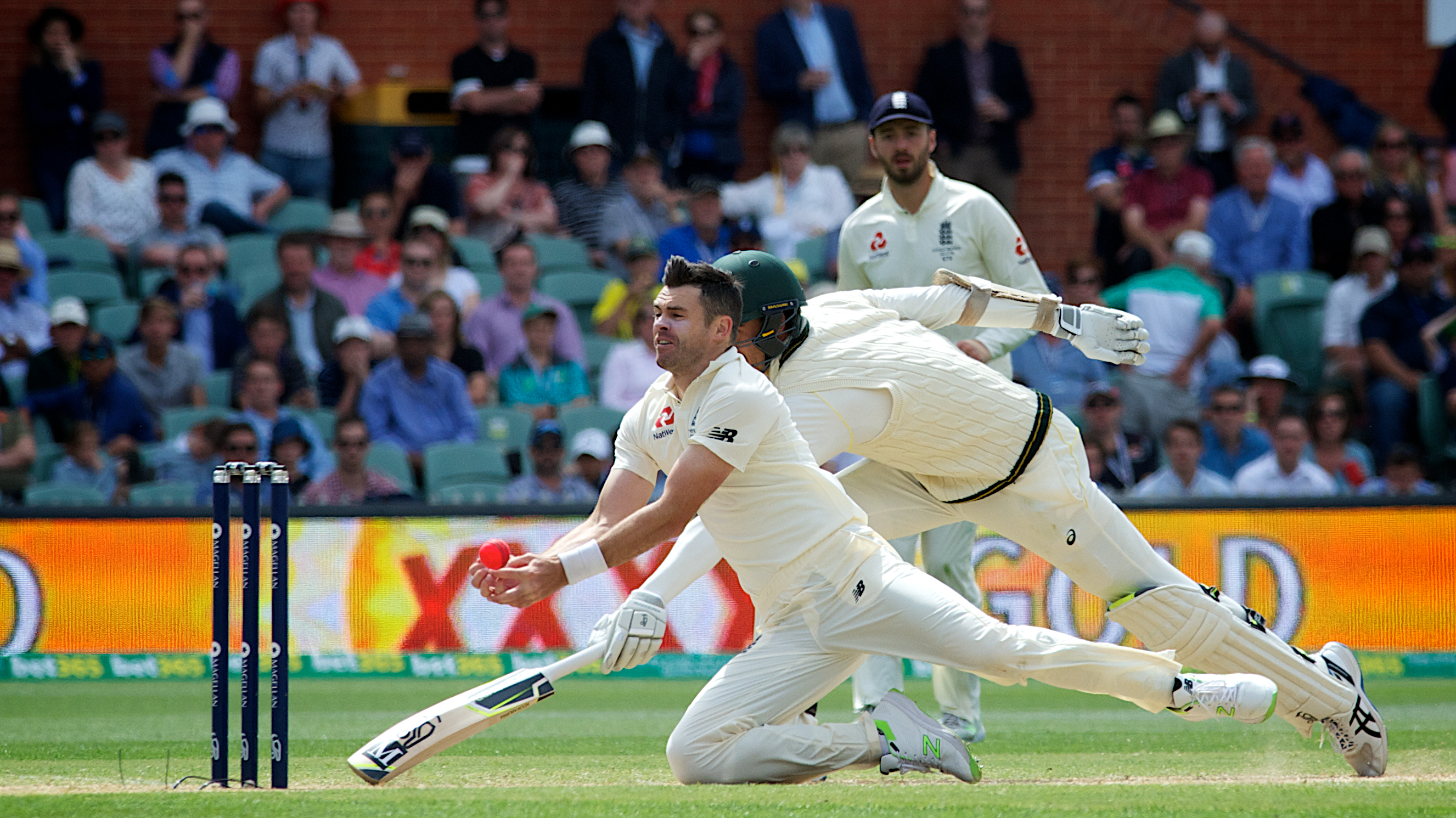 Two other things had been lost. One was a decent break between innings for the bowlers – overnight, to be sure, but reduced by extravagant batting to only two sessions of play.

More than this, much more, the Australians had wantonly cast aside the mantle of implacable obduracy which infects an opponent with self-doubt.

Before dinner-time, a distinct chill had entered the hearts of the Australian spectators. England none for 52. A record 302 more needed. Surely not? Too early for the Barmies to be urging them home on a wave of song, but not too early for a defiant tone in the singing and chanting.

And something else had happened, early in the innings. A Josh Hazlewood delivery had crashed into Alastair Cook’s right pad. A desperately enthusiastic appeal was rejected, and the Australians at last decided against invoking the decision review system. Ball-tracker had it hitting leg stump, about two-thirds of the way up. 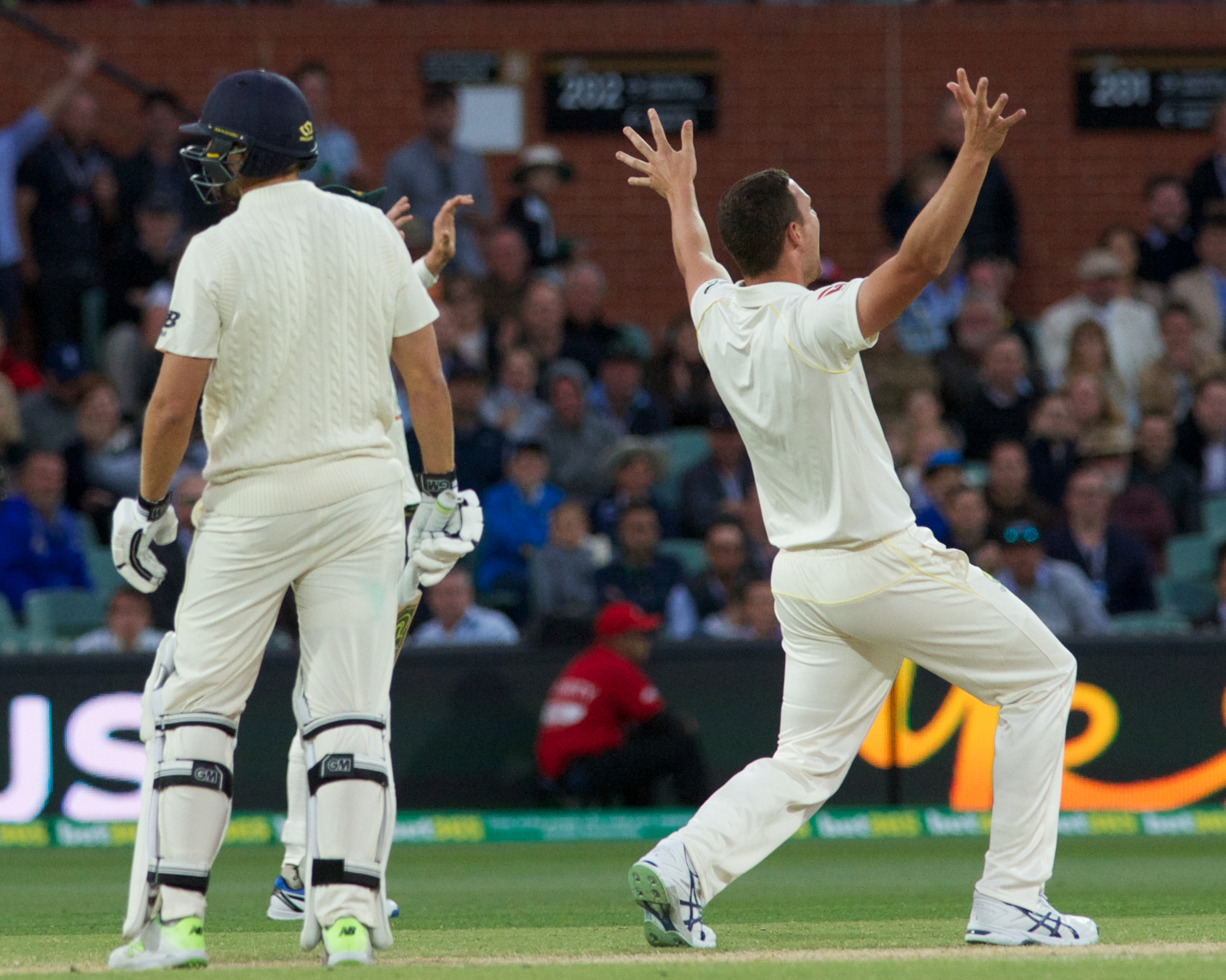 There is little observable reason to doubt ball-tracker’s estimate of the height of the bounce, but I have long wondered whether its algorithm is quite up to reading late lateral movement of the ball.

But the DRS is not the game, and other things were happening…

No complaints, though. Everyone knows the rules. If you want to second-guess the umpire you to have to say so. In the end it did not cost many runs. Alastair Cook was out before dinner for 16 – lbw, if you please, to Lyon. 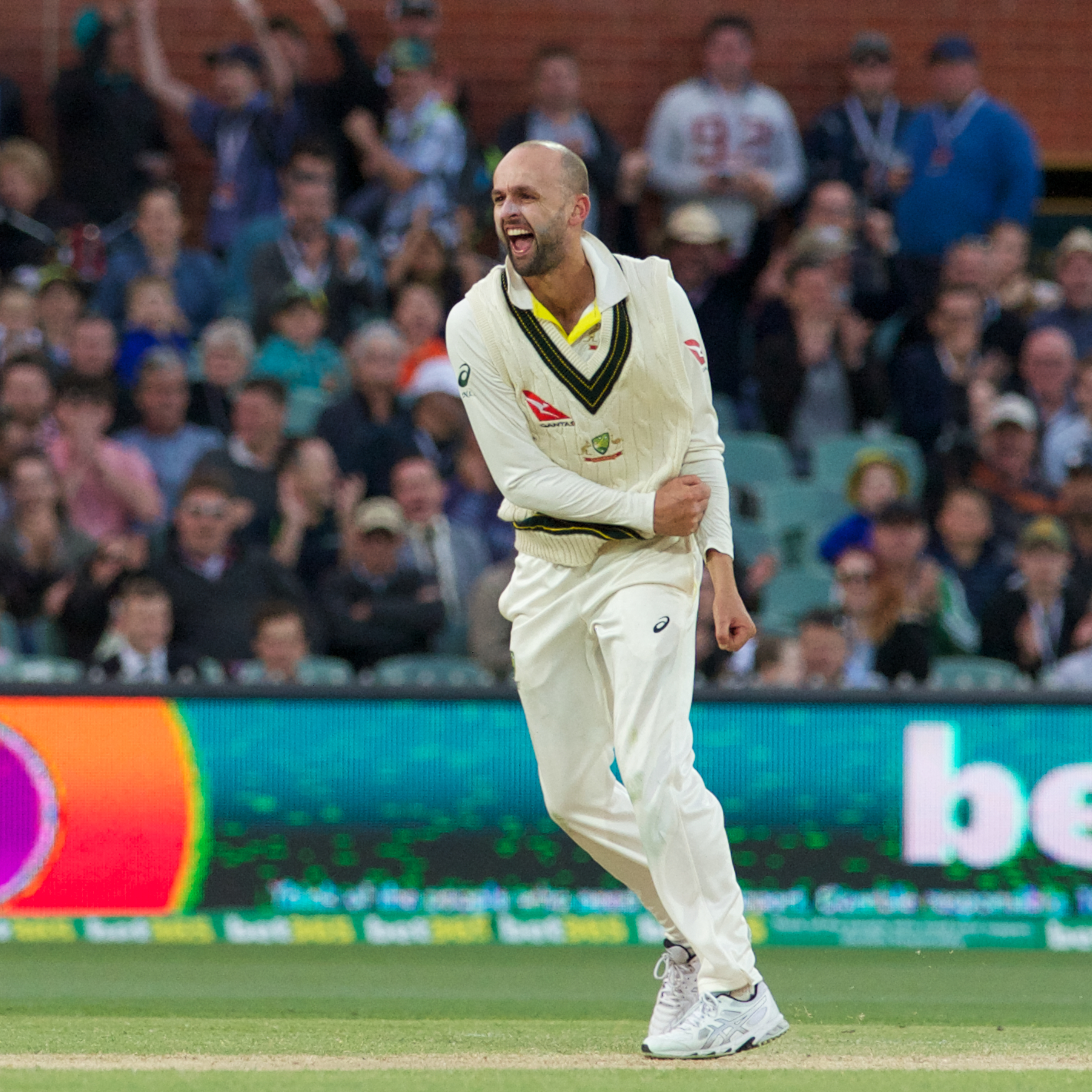 The GOAT gets his man. Photo: Michael Errey / InDaily

But did the wind shift, out to sea where that cloud seemed to be growing? Shane Warne, who has an acute sense of the psychological temper of a cricket contest, invited his television audience to wonder whether the rub of the green might just have started to go England’s way.

And if you were focussing attention on decision reviews over the next little while, you might have begun to think so, because later on Australia squandered two in the space of three balls, one of them most puzzling. It is an unusual day when the wicketkeeper and the slip-fielder alongside can’t tell the difference between the ball brushing bat or glove, and the ball brushing the batter’s thigh, even if they are all very close together.

But the DRS is not the game. Other things were happening. Plainly enough, the Australian bowling strategy was to encourage the England batters to play shots, rather than settle into a rhythm of dour resistance. But there is a difference between inviting stroke-play and squandering runs on the breezy assumption that 354 is too many.

There were more 10-plus overs than you expect to see in a summer.

And something else was happening. 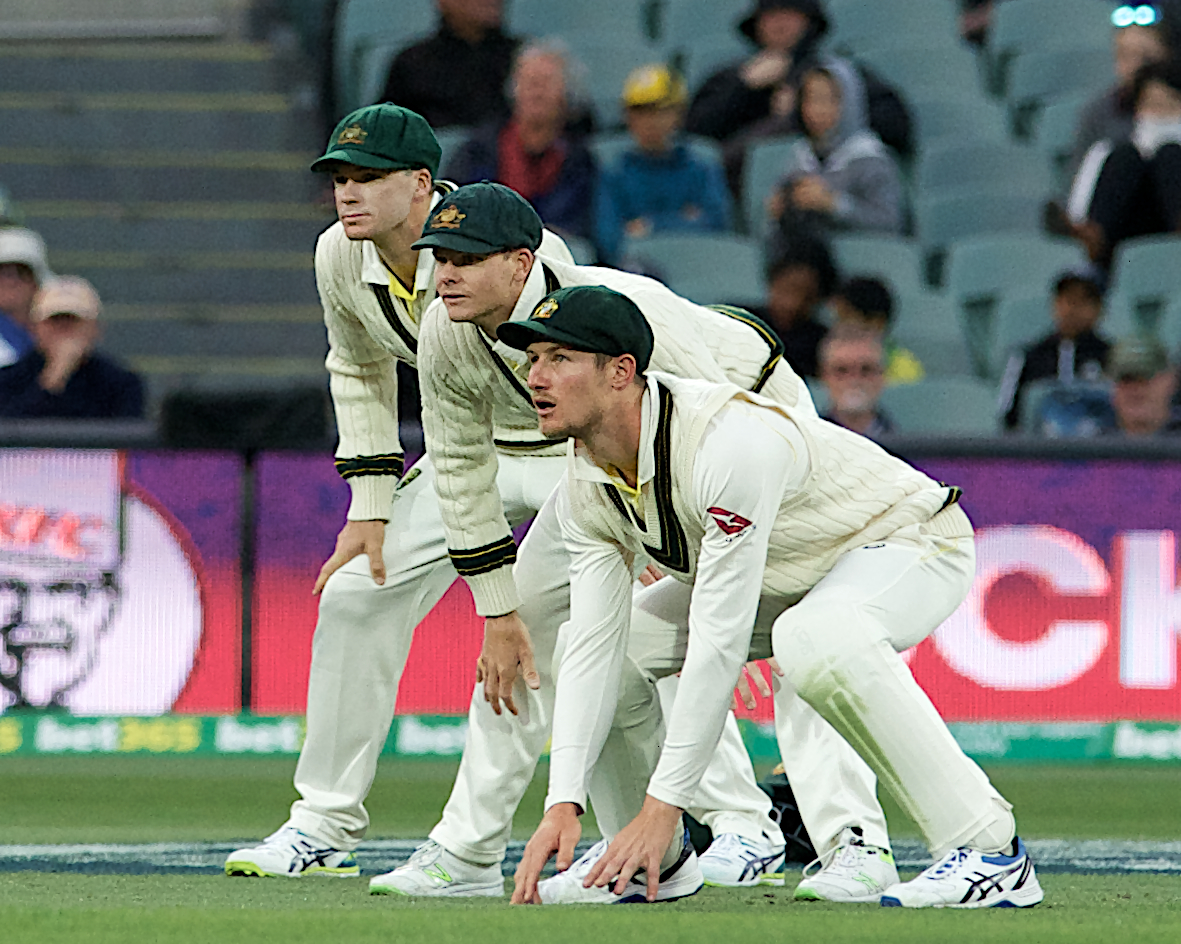 The England captain Joe Root, who had barely been able to buy a run before this, came to the crease all nervy and arrhythmic, reminding us of the cheeky chappie who entered international cricket a few years ago looking slightly surprised that he has been let into the sweet-shop while the owner was away.

By the end of the night he had batted himself into elegant and assured-looking form. Root 67 not out, Woakes (who has had a good match) 5 not out, England 4/176 and still looking at a 178-run mountain.