What a difference a day makes. It’s a Spanish song in its origins, given English words and made immortal rather a long time ago by Dinah Washington, but it deserved to be played and perhaps even sung in the England dressing-room at Adelaide Oval last night.

What a difference a day made!
Twenty-four little hours
brought the sun and the flowers
where there used to be rain.

Over-optimistic, perhaps, but forgivable after the dispiriting weekend toiling in the field as Australia ground out 442 runs, and after the abject performance with the bat during the rain-free daylight hours of yesterday – bowled out for the second successive time so quickly that the Australian captain did not even have time to call for a second new ball. 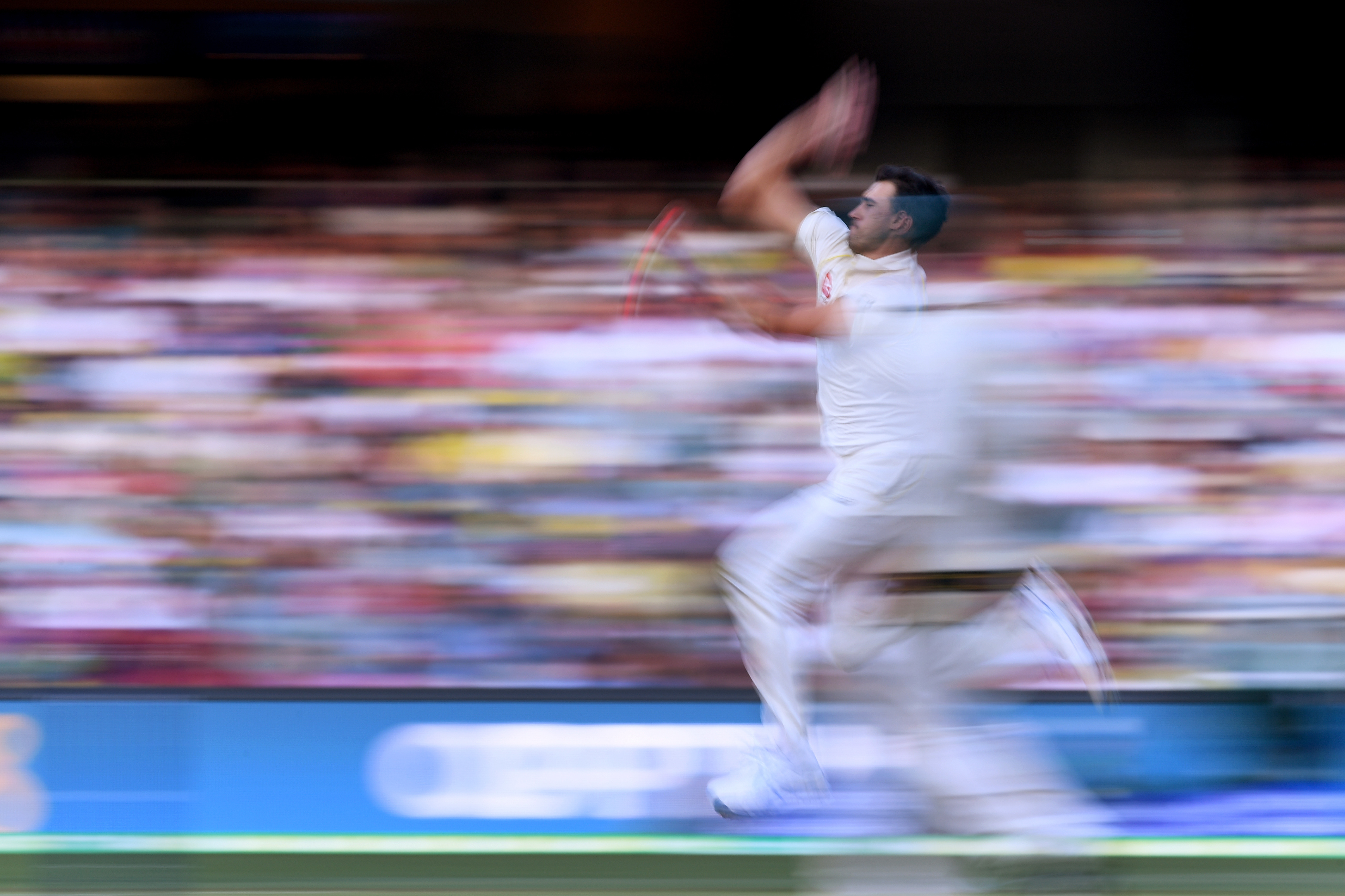 In Brisbane, after the Australians had got their noses in front, it had taken barely more than 70 overs. This time, confronted by a seemingly impossible total, 76 overs. An improvement, of sorts. And then, in the evening, suddenly they had reduced Australia to 4 wickets down for 50 – uncannily, precisely one wicket worse off than England had been during its brief innings earlier in the day.

Play began a half-hour early, making up time lost to rain on Sunday night when the Australian bowlers were just getting up a head of steam before they were sent inside with England one down for 29.

We hardly had time to settle in and wonder when the pressure of climbing that two-day 442-run mountain would eventually mess with the minds of the England team. The rot set in at once – like a fish, from the head. 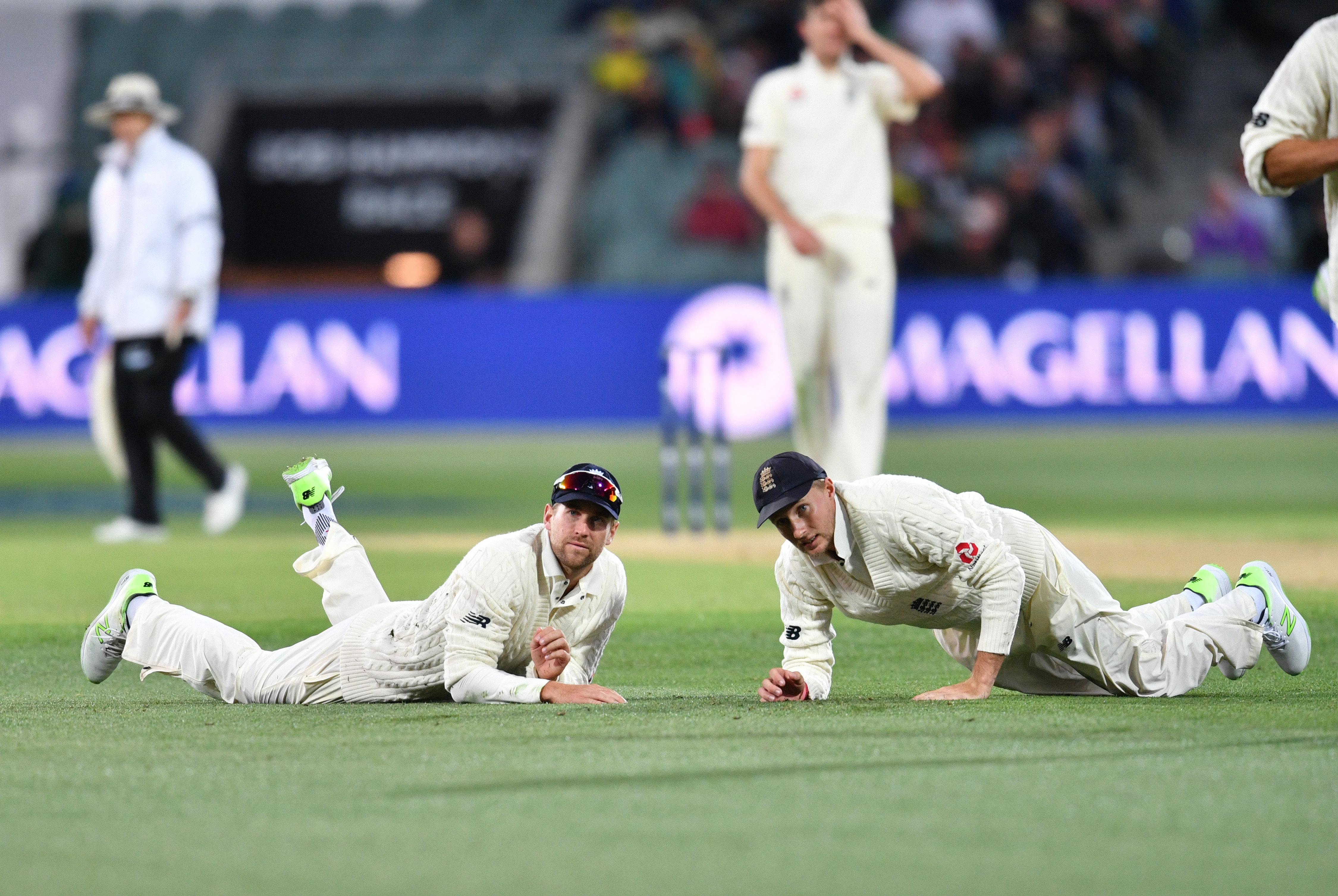 James Vince was caught by wicketkeeper Tim Paine, fending unnecessarily at the tenth ball he faced. It was delivered by Josh Hazlewood, bouncing so high outside the off-stump that it took the edge of the bat less than 20cm from the top of the blade. Two out for 31, Vince 2.

Pat Cummins continued bowling from the other end, which some commentators professed to find puzzling, and wondered why Starc was not on the job. They had perhaps forgotten that the rain on Sunday night had interrupted Cummins’s over, so he and Smith had no choice but for him to start proceedings on Monday. It probably seemed sensible for him to keep bowling for a while.

Events confirmed that it was. Soon Joe Root so far forgot the state of the game that he aimed a drive at a full-length Cummins delivery that was well wide of the off-stump, and well wide of where Root had planted his feet. Bounce, and Bancroft at third slip, did the rest. England 3/50, Root 9.

An hour passed, and 30 more runs were accumulated, but the sense of gloom around the ground was now already so deep that it seemed no time at all before Alastair Cook, facing Nathan Lyon, dabbed at a ball pitching so far outside off stump, and turning away. There was no conceivable reward for any shot that a batter might be able to play. He succeeded only in nicking it to an exultant Smith at first slip.

He was perhaps lucky that the nick did not go to the man who had been moved in to join Smith in the arc behind the wicketkeeper only one ball before. To have visibly ignored such a warning would have been doubly humiliating.

In fairness to Alastair Cook, he had at least dropped anchor for a decent time before his brain slipped its moorings

Cook had been on the way to emulating Steve Smith and Shaun Marsh – 90 balls absorbed, 37 runs accumulated. Now, after a brief moment of anguished self-rebuke involving a thump of his bat on the ground, he was on the way to the dressing-room. England 4/80.

It was as though these men had not been at the same game that the rest of us had been watching. What we had seen was the Australians surviving by not playing any ball they did not have to play, keeping the bat carefully under the nose when they did have to play, and accumulating by pushes and nudges – for two days, dammit!

What we saw on Monday morning was three batters playing shots that were not well-composed to deliveries that should have been left alone in any event. In fairness to Alastair Cook, he had at least dropped anchor for a decent time before his brain slipped its moorings.

But England was now more than 350 runs behind, with only six wickets in hand. Dawid Malan – who, for the record, is a Londoner by birth – stopped the rot by hanging around for a while before he became the first batter for the day to be dismissed in a way he could not have been expected to do anything to prevent.

And the others did their best, often not convincingly, making dangerously frequent and inelegant use of air-space unoccupied by fielders, withstanding the barrage of short stuff at their bodies – surely excessive, even conceding the general strategy of roughing-up the tail-enders. Except for the debutant Craig Overton, it was not authoritative. Nathan Lyon’s blinder of a catch from his own bowling, and Mitchell Starc’s pretty smart follow-up, both flowed from hesitant bunts. 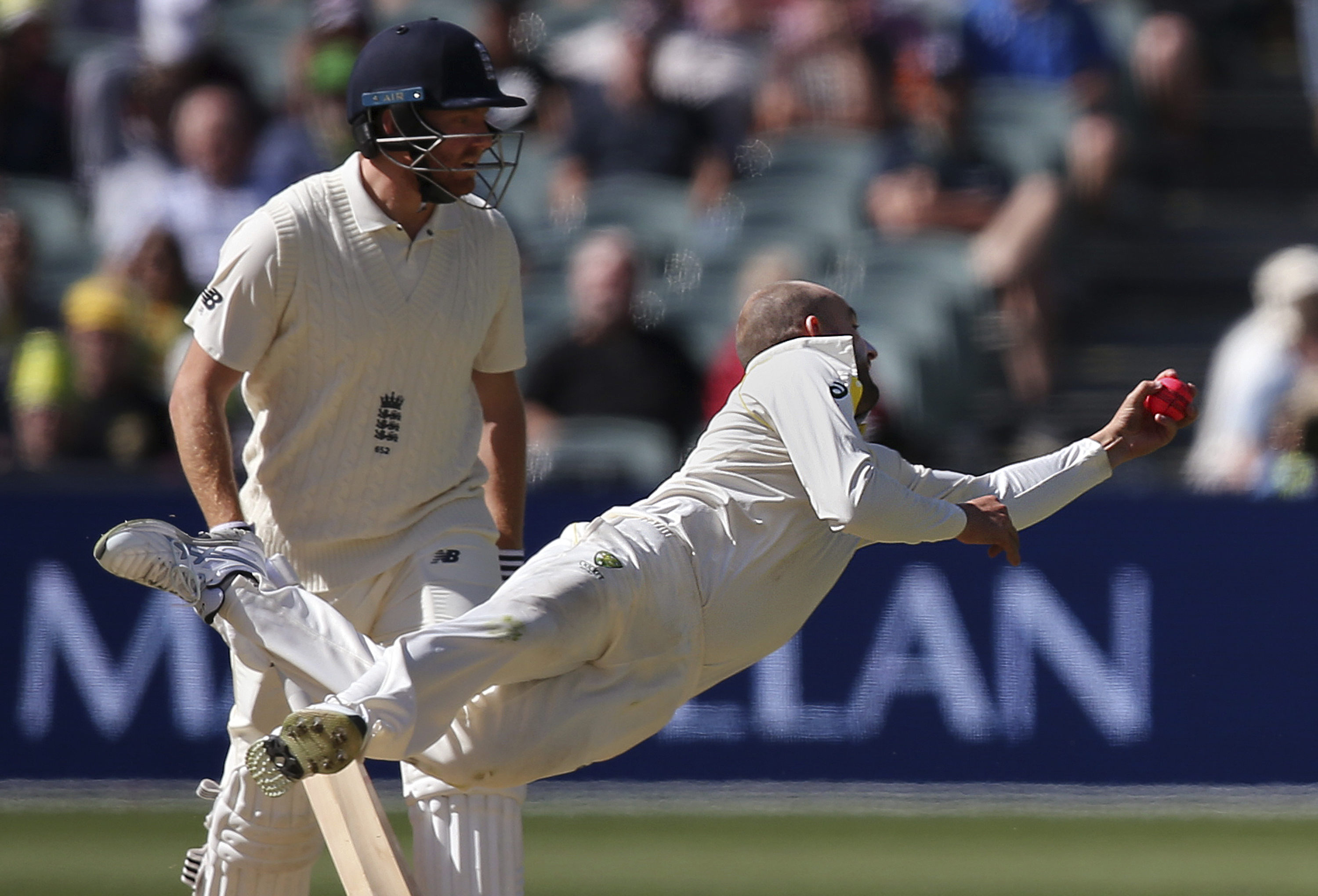 The GOAT leaps like a gazelle en route to the catch of the summer. Photo: Rick Rycroft / AP

It only lasted for about 50 overs – one team’s batting-time in a one-day match – but it was something. Those who have convinced themselves that Australia will roll over this England squad might do well to keep this show of resilience in mind. It may just be the proverbial cloud the size of a man’s hand, lurking above the horizon.

There was no maybe about its practical effect on the game. The next innings would have to begin in the bewitching light just after dinner, when the sun still throws shadows of the stands, and patches of light through their airy design, on to the grass, and yet the floodlights have cut in, producing star-shadows around everything and everyone on the arena.

There was much debate, and much urging, about what Steve Smith should and would do, given that Australia’s massive lead of 215 gave him the option of sending England straight back in. But 76 overs is 76 overs: in effect, it was the end of the day, a new ball was due, and the bowlers would be asked for a last effort before getting a night’s rest. 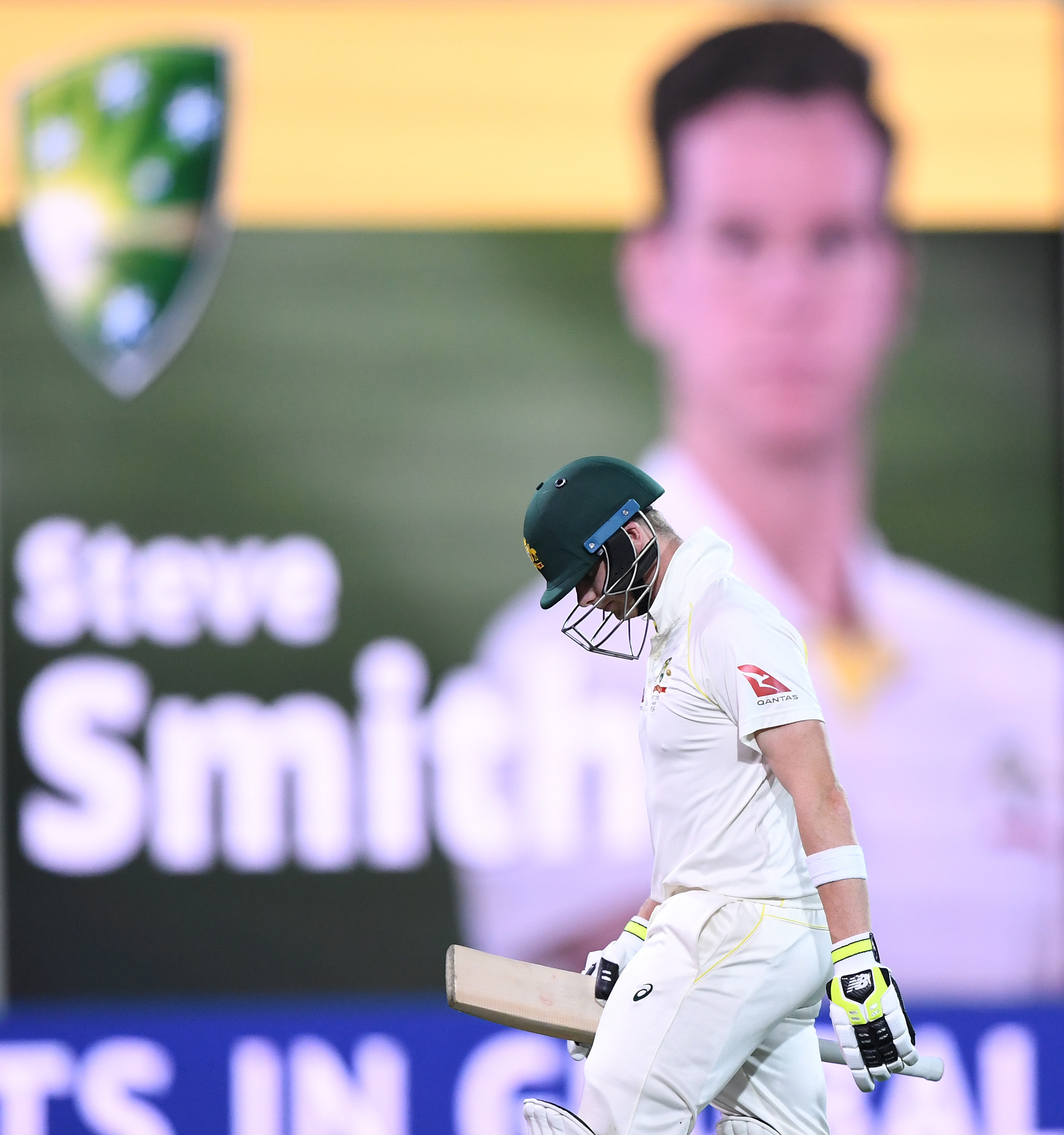 Steve Smith walks from the field after being given out lbw for 6. Photo: Dean Lewins / AAP

In the circumstances of last night, it would have to have been a longer effort than the maximum of ten overs that have to be delivered with a new ball at the end of a day in which the opposition is still batting.

And if they did not break through, and if England was able to begin the new day in easier conditions with the ball already 25 overs old instead of ten…better, it seemed to Smith, to weather the storm and build the lead as much as possible.

There was no doubt it would be something of a storm, and there is no mystery about why it can be much more difficult to bat at night. It is no mystique about the pink ball, or the lights.

It has something to do with there being some grass on the pitch – a factor which does not much affect things in day-night one-day matches where they shave the pitch to produce a bowler-unfriendly road for the big-hitting entertainment of us all.

It has a lot to do with humidity. Humidity favours bowlers’ ability to swing the ball in the air, and to get it to deviate off the pitch, so long as they release it so that the seam of the ball strikes the pitch on landing.

And if you wonder why Jimmy Anderson was difficult at first, and unplayable later, remember that he is perhaps the greatest current master of swing and seam bowling, and then read this, from the records of the Bureau of Meteorology recording station on West Terrace, just across the river from the oval: 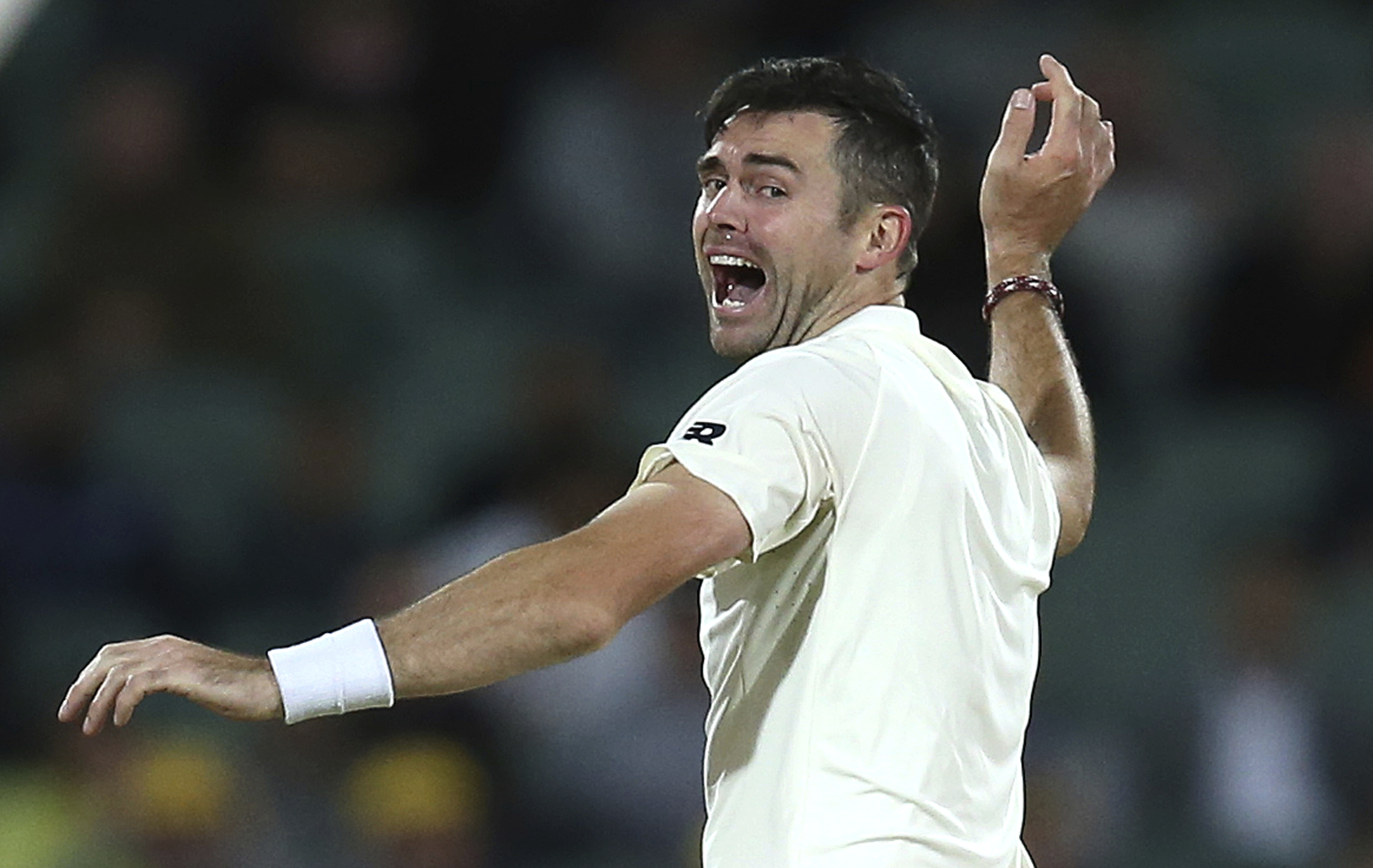 Jimmy Anderson hits his straps, if not the stumps. Photo: Rick Rycroft / AP

So Warner and Khawaja survived with difficulty for an hour or so, and then, humidity rising, Anderson – and Chris Woakes with him offering more swing and seam – put the Australian top order to the sword.

It was always a risk. And those who would criticise Smith for batting need to remember that the Australian fast attack is not as well equipped to use those conditions. They rely much more on speed, line and bounce.

That’s the beauty of Test cricket. So many ifs and buts, so many ebbs and flows.