The tourists came close to inflicting India’s first Test series loss at home since 2012 and recorded Australia’s first Test win in India since 2004 but ultimately had to settle for a 2-1 series defeat.

The history books will show India cruised to an eight-wicket victory in the series decider but Lehmann knows losses in Bangalore and Dharamsala could well have been victories if not for a couple of false strokes and dropped catches.

“We were disappointing in a couple of Test matches. We got so close yet so far. One hundred runs short in this game and probably 80 runs in Bangalore,” Lehmann said prior to the squad’s departure from Dharamsala.

“If we made better decisions with the bat, we’re getting those.

“We weren’t good enough in this series… we missed big opportunities to win the series.

“I’m pleased and proud of the lads… we just fell short in the crucial stages.”

Led by determined skipper Steve Smith, who finished the leading run-scorer of the series with 499 runs, there was a sense of resilience and adaptability absent during failed tours of Asia in recent years.

A successful stonewall in the third Test, achieved by Peter Handscomb and Shaun Marsh, was unlike anything Australia have achieved since 2011.

Lehmann paid tribute to the shift in attitude, driven by Smith, that prioritised defence and allowed his team to compete against the top-ranked Test side.

“They’ve been difficult conditions, there is no doubt about it. They haven’t whinged once, they’ve been just getting on with the game,” he said.

“They’ve copped a lot from Indian media. I’ve been pleased the way they have handled it.

“We have decided we are going a different way about the way we play. Obviously we’re less aggressive than we have been in the past. 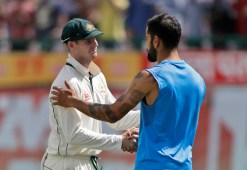 “The young group will grow. They will get better, we’ve just got to keep learning.”

Lehmann added he has “actually changed a bit” in his coaching style.

Most of the squad will take part in the Indian Premier League that starts next week. Australia’s next assignment is in June, when they travel to England for the Champions Trophy.