Renshaw had played just 12 first-class games at the time. Steve Smith and most of his teammates didn’t know what he looked like.

The 20-year-old’s call-up was widely panned. Some pundits and past players couldn’t understand how such an inexperienced batsman could be blooded.

Renshaw was immediately typecast as the nurdler, earning raspberries on debut at Adelaide Oval as the dot balls stacked up. The same tag fit at the SCG, where he followed up David Warner’s century in a session with a knock of 184 which took almost seven hours.

Coach Darren Lehmann made a frank admission after that match, noting Renshaw was no guarantee to open alongside Warner in India.

However, Lehmann and on-duty selector Trevor Hohns ultimately decided to leave Usman Khawaja out of the XI.

Renshaw hasn’t looked back since.

No Australian has scored more Test runs before the age of 21 than the imposing left-hander, who will celebrate that milestone birthday on day four of the fourth Test. 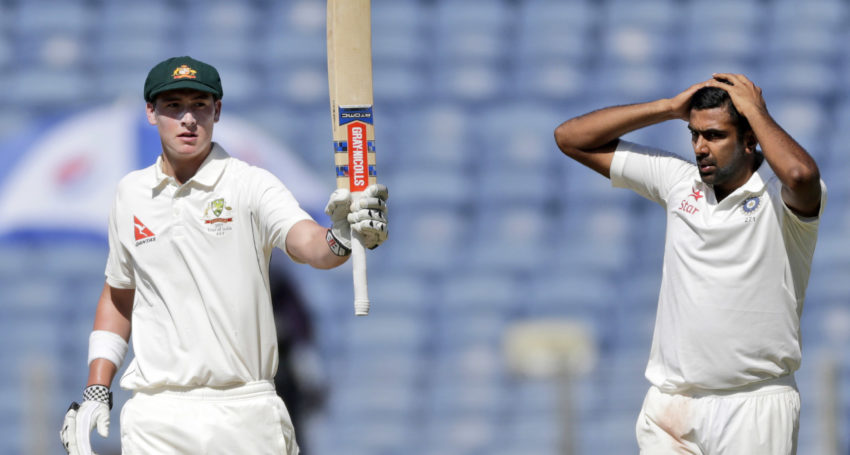 Renshaw celebrates his fifty during the first day of the first Test in Pune. Photo: Rajanish Kakade / AP

For someone who hadn’t set foot in India prior to arriving for the tour, Renshaw has demonstrated immense maturity during the past two months.

“On the field he definitely does,” Warner quipped.

“He knuckles down, he’s got the game. He’s got the brains as well for a 20-year-old kid.

“Credit to him to come out here and play the way he has done so far in this series, it’s a testament to him and obviously (the same applied for) the way he started in Australia as well.”

Renshaw has scored 223 runs and faced 567 deliveries in the ongoing series, compared to Warner’s 131 runs and 217 balls.

He has shrugged off sledging and short-pitched bowling alike with minimal fuss, grinning in a fashion that belies the immense pressure.

Shaun Marsh is another batsman to have repaid selectors’ faith. Marsh returned to the XI at the expense of Khawaja and helped Australia salvage a draw in the third Test alongside Peter Handscomb.

“He’s a special player for us,” Warner said of Marsh.

“He’s one of our toughest players in this team and nothing is ever going to knock SOS down.”

MOST TEST RUNS FOR AUSTRALIA BEFORE 21ST BIRTHDAY