The fruits were there for everyone in Ranchi to see yesterday, when Smith delivered in his side’s hour of need against India yet again.

Smith produced yet another captain’s century in Ranchi, finishing 117 not out to help his side reach 4-299 at stumps on day one of the third Test.

Smith was booed off the park in Bangalore, having outraged counterpart Virat Kohli by looking to the stands for illegal advice over a potential review.

Yesterday, though, Smith infuriated Kohli with an innings that could potentially put Australia on track to retain the Border-Gavaskar with a victory in the third Test.

“I can’t control the past. It’s gone, so you have to let that go as quickly as you can,” Smith told Star Sports.

“I came out and said I made a mistake at the end of the last game and moved on from it.

“It was about focusing on this Test match here in Ranchi.”

Smith cleared his mind between Tests during a visit to his sponsor’s bat factory in Jalandhar.

The 27-year-old passed 5000 Test runs during Thursday’s dig. No Australian has celebrated the milestone at a younger age.

Australia will start day two of their third Test against India in a commanding position, but Smith knows the job is far from done.

Smith and Glenn Maxwell, who excelled in his fourth Test and first since 2014, have shared an unbeaten 159-run stand.

If the pair can extend their partnership, already the highest of the series, through to lunch on Friday it will push Australia closer to victory.

But if they are dismissed quickly the consequences could be severe given how well the pitch is playing.

“The wicket is a a pretty good one so we’re going to need every run we can get in this first innings. it’s going to be crucial,” Smith said.

“It is a good pitch, so we will need all the runs we can get,” Smith said.

“The bounce was consistent. It hasn’t really spun.

“We will need as many as we can get in the first innings… tomorrow is going to be a crucial day for us.”

Widely predicted to be the worst pitch of the three produced in the series so far, Smith and Maxwell, who is 82 not out, made it look remarkably flat.

“It looks slow at the moment. It might break up if there’s a few more footmarks,” Australia opener Matt Renshaw said of the wicket.

“First session (on Friday) is going to be one of the most crucial in this match.

“If we can win that session we go a long way to winning the Test match.”

Maxwell gave the greatest indication yet he is ready to make the leap from Twenty20 sensation to Test cricketer.

His composure and strokeplay were just as impressive as that demonstrated by the skipper.

The controversial allrounder was called up for his fourth Test and first since 2014 following Mitch Marsh’s shoulder injury, and the mature knock was proof of the potential that so many pundits have discussed in recent years.

Maxwell reined in his natural aggression, watching some 56 balls before he felt comfortable enough to strike his first boundary.

There were two sixes and an errant reverse-sweep that almost ended his innings, but for the most part it was the sort of sensible batting that Australia have craved at No.6 for so long.

Maxwell’s innings is already the highest score by an Australian No.6 since Smith posted a century against South Africa over three years ago.

“He played beautifully, stuck to his gameplan the whole time. He played nice and straight and hit the loose ball,” Smith said.

“He batted like he has been batting in the nets.

“He’s been hitting the ball really well, so he got an opportunity and he’s making the most of it.”

Maxwell, who boasted a high score of 37 and average of 13.33 prior to the match, will seek to post his maiden ton today.

Renshaw was suitably impressed with how Maxwell steadied after the visitors slipped to 4-140.

“He’s a class player and he showed that he could do it in Test cricket,” Renshaw said.

“You hear about this in the media a lot, that he’s a bit of a cowboy and that sort of thing.

“But he just played some good cricket shots today.” 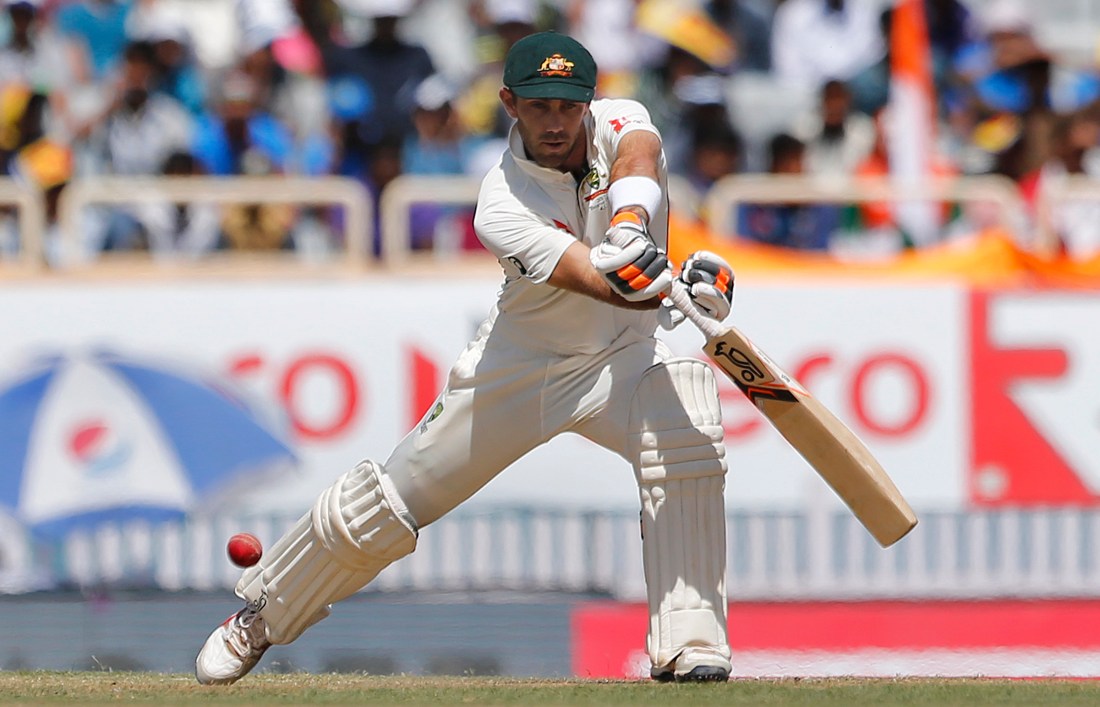 Meanwhile, Kohli should be fit to continue for India after injuring his shoulder, team bosses have suggested.

The India captain missed much of the day’s play after damaging his right shoulder while fielding near the boundary on Thursday and deputy Ajinkya Rahane took over.

But the Board of Control for Cricket in India said in a statement on its website that scans had shown “no serious concerns”.

“The BCCI medical team confirms that Indian captain Virat Kohli is presently undergoing treatment to recuperate from a strain in his right shoulder,” it said.

“Relevant investigations have revealed that there are no serious concerns which will hamper his speedy recovery… He will continue to receive treatment, which will assist him to participate in the rest of the match.”

The 28-year-old suffered the injury when he fell awkwardly after diving to stop a Peter Handscomb drive close to the long-on boundary in the 40th over of the day. The batsmen ran three.

“In his intent to save that one run, he stopped the ball and landed on his right shoulder when he rolled over,” said India’s fielding coach Ramakrishnan Sridhar.

“The impact was quite heavy because of the momentum he was carrying. There was shock on his right shoulder.”

Rahane’s subdued leadership was in stark contrast to Kohli’s firebrand captaincy but Sridhar was impressed with how the India vice-captain responded to the challenge.

“He was taking advice from (Ravichandran) Ashwin and Ishant Sharma, the seniors in the team. It was quite democratic. Ajinkya did a good job there.

“In Virat’s absence, he kept the energy level, positioned himself in the outfield and made sure he was communicating well with the bowlers.”

Australia will resume day two of the penultimate Test of the series on 4-299.