Jubilant Pakistan skipper Misbah-ul-Haq claimed yesterday that their stirring Gabba effort had set them up for the three-match series.

History shows Australia clung to a 39-run victory early on the final day.

Yet Misbah said his side would take plenty of confidence into the series after just falling short of a world record victory chase.

Man of the match, defiant No.6 Asad Shafiq, hit a masterful 137 to push Pakistan within sight of their daunting 490 target.

They would have smashed the previous Test run chase record of 7-418 by the West Indies against Australia in 2003.

Pakistan’s inspirational batting effort was made all the more remarkable after they lost 7-24 to the pink ball under lights to be bowled out for 142 in their first dig.

“As the skipper I am happy to see the team play like that,” Misbah said of their remarkable run chase.

“Chasing 490 in the last innings after 142 in the first, the character of all the batsmen showed.

“I think it set the tone for the series.

“We are looking forward and are confident ahead of the next two Test matches.”

Misbah said the difference between their contrasting innings came down to attitude.

“It is a totally different scenario when you start your innings, with a new ball under lights – they got through us,” he said.

“But in the second innings they showed courage to survive the initial burst with the new ball.

“Then they played their shots. The mindset was positive.

“They showed character and it changed the whole scenario.”

Misbah said they were mentally stronger after becoming cricket’s nomads since being banned from playing at home following a 2009 terrorist attack on a touring Sri Lankan team in Lahore.

“You are playing all the time away from home, even for a home series you stay in UAE for three or four months,” Misbah said.

“Mentally they are tired.

“But overall this team is experienced enough now after playing together for six years, you could say it is a settled team.

“They are capable of playing in any conditions because they are mentally tough.”

They may be full of confidence but Pakistan still face a daunting task to end their run of 10 straight Test losses in Australia.

Pakistan have never recovered from 1-0 down in a three-Test series.

Australian captain Steve Smith, meanwhile, has confirmed an umpiring error meant play controversially continued for an additional half an hour on day four of the day-night Test. 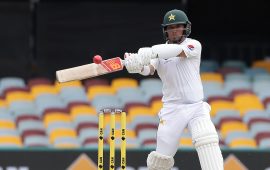 Smith revealed he wanted to come off, having recognised his tiring quicks were unlikely to create a breakthrough but umpire Ian Gould ruled otherwise.

The Australian captain’s tactics have come under fire after the near-death Test, with the decision to play on with extra time sheeted home to him.