They will face either New Zealand or West Indies in Sunday’s decider at Kolkata, having recorded a dramatic five-run win over England in their semi-final.

The contest was a textbook example of what pressure can do to sides in knockout fixtures.

It was a combination of false strokes and fine bowling, especially from quicks Megan Schutt and Ellyse Perry.

England delivered their worst under the pump, while Australia produced their best.

Southern Stars skipper Meg Lanning, who top-scored with 55 to be named player of the match, never panicked and the same can be said of her teammates. 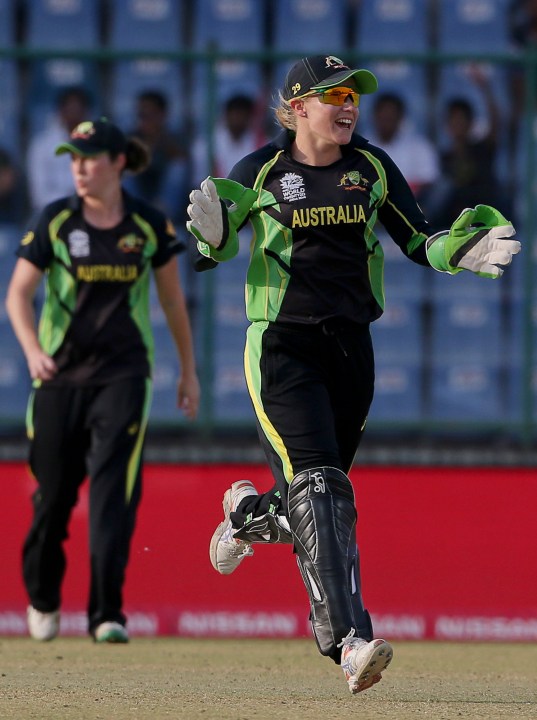 “I guess it’s from being here before in big games,” Lanning said how her side was so collected when England were in the box seat to send them packing.

“We knew that a couple of wickets would change the momentum … England had the momentum in the first 10 overs then we wrestled it back.

“We knew that if we got a couple we just had to keep the pressure on and try and make them take risks.

“I thought we did that pretty well … we’re ready to win four in a row.”

Lanning was full of praise for her attack, which fired late after spraying the ball all over the place early on.

“It gives us a good blueprint of what we need to do under pressure,” Lanning said.

“We didn’t start that well with the ball, we gave away some free runs and extras and probably bowled a little bit wide.

“We know our last 10 overs are very good .. I’ve got full faith in all of our bowlers to be able to come back and restrict them at the end.”

Lanning was typically self-effacing after yet another outstanding innings from the No.1 ranked batter in the world.

“Full credit to the bowlers,” the 24-year-old said.

“We needed someone to try and bat through and that turned out to be me. I would have liked to have got a few more boundaries towards the end.

“I was disappointed with that … we probably could have got up to 145-150 if we had a good finish so that’s something definitely to work on.”

England captain Charlotte Edwards was full of praise for her counterpart.

“She’s going to break a lot of records … we could learn a lot from her running between the wickets,” Edwards said.

Lanning’s side will travel to Kolkata on Thursday, when West Indies and New Zealand clash in Mumbai.

The extra day’s rest will be a bonus but Lanning knows the final be tough no matter who Australia face.

“We’ve got ourselves there now. We’ve just got to enjoy it and play our best,” she said.