Smith’s reign as captain has been full of success and largely incident-free.

But Smith lost his cool on day four of the Christchurch clash, as the tourists were charging towards the No.1 Test ranking. 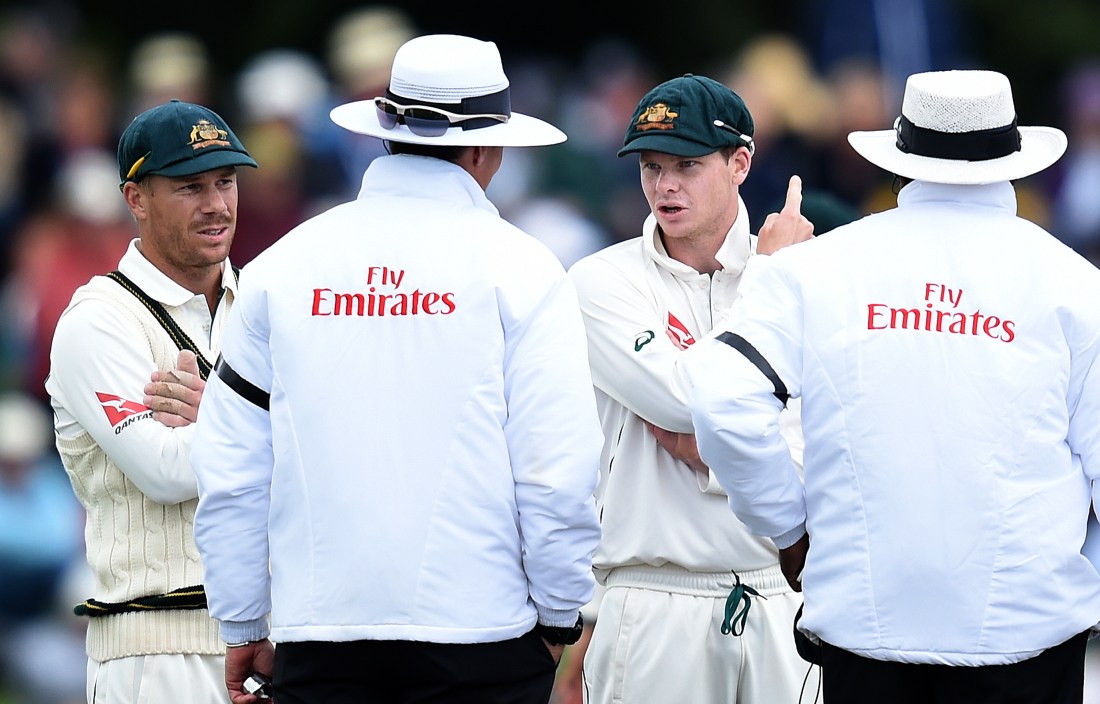 The 26-year-old was belatedly booked for his heated approach to controlling umpire Ranmore Martinesz.

He was docked $4635 by match referee Chris Broad.

Smith queried why third umpire Richard Illingworth didn’t use the snickometer to assess a lbw shout that Australia reviewed.

“That was basically what I was doing at the time and that’s deemed to be dissent,” Smith said of his heated approach.

“I’ll cop that on the chin and I need to be better as a leader; I need to set the example – that wasn’t good enough.”

Josh Hazlewood was docked 15 per cent of his match fee, the red mist having also descended on the spearhead after Illingworth ruled against the visitors.

Smith opted to plead guilty, with the International Cricket Council confirming he’d been fined 30 per cent of his match fee.

“Yesterday was a mistake on my behalf,” he said.

“It’s about trying to learn from my mistakes… myself and Josh Hazlewood have crossed that line in this Test match and that’s not what we’re about.”

New Zealand commentators had begged to differ yesterday, citing a string of behavioural indiscretions by the Australian team during its New Zealand tour, including Mitch Marsh’s petulant walk-off after being dismissed in the ODI decider.

But Smith’s conduct has otherwise been largely above board since replacing Michael Clarke as captain after last year’s Ashes.

He even publicly rebuked Mitchell Starc after the left-armer unnecessarily hurled a ball at the stumps that almost hit a batsman in the Gabba Test.

McCullum, who has won a handful of ‘spirit of cricket’ awards, felt Smith had improved the reputation of the Australian side.

“The majority of their focus is on positive play rather than necessarily some of the semantics of past eras,” McCullum said.

“They go about their work in a nice manner and they play hard cricket… but in the series that we’ve had, I don’t think they’ve ever looked to step over the line.”

McCullum added the two recent trans-Tasman series had both been played in “great spirits”.

“Steve Smith has been a catalyst for that. He plays the game for the right reasons,” he said.

“He plays with his heart on his sleeve but he’s a very respectful guy and a wonderful cricketer.”

Smith vowed to learn from McCullum, terming the 34-year-old a “great ambassador” for the sport.

“We’ve talked quite a bit and he gave me a bit of criticism in England with the Ben Stokes dismissal,” Smith said.

“We’ve talked a little bit about that – I guess I’m still young in my career as a leader and you try and learn from different things.”