The South Australian Scorpions, captained by Lauren Ebsary and coached by Andrea McCauley, both home-grown players, are now part of the state’s cricketing folklore after claimed their inaugural WNCL title.

It the South Australia women’s team’s first competition win since the 1994-95 season when a team coached by Denis Brien and captained by McCauley collected a third championships win in four years, back in the days when the national carnival was played over a couple of weeks.

This was the last golden era of SA cricket.

On Sunday at Hurstville Oval in Sydney, the Scorpions set NSW a daunting  total of 265 for victory. The South Australians bowled tight lines and fielded brilliantly to claim a 54-run victory (scroll down to watch highlights).

“We were the calmest we’ve been all season, sitting with my assistant coach Cossie (Andrew Costello),” McCauley said.

“Speaking with the girls before the game, it was a terrific team effort to get to the final.

“‘We needed to replicate that.

“Bridget (Patterson) and Sarah (Taylor) set up the game, and the rest of the team played their part as well.”

She said coaching a final win was just as enjoyable as playing in one – and she believes the team has much more to achieve.

“There is still much more improvement in this squad.” 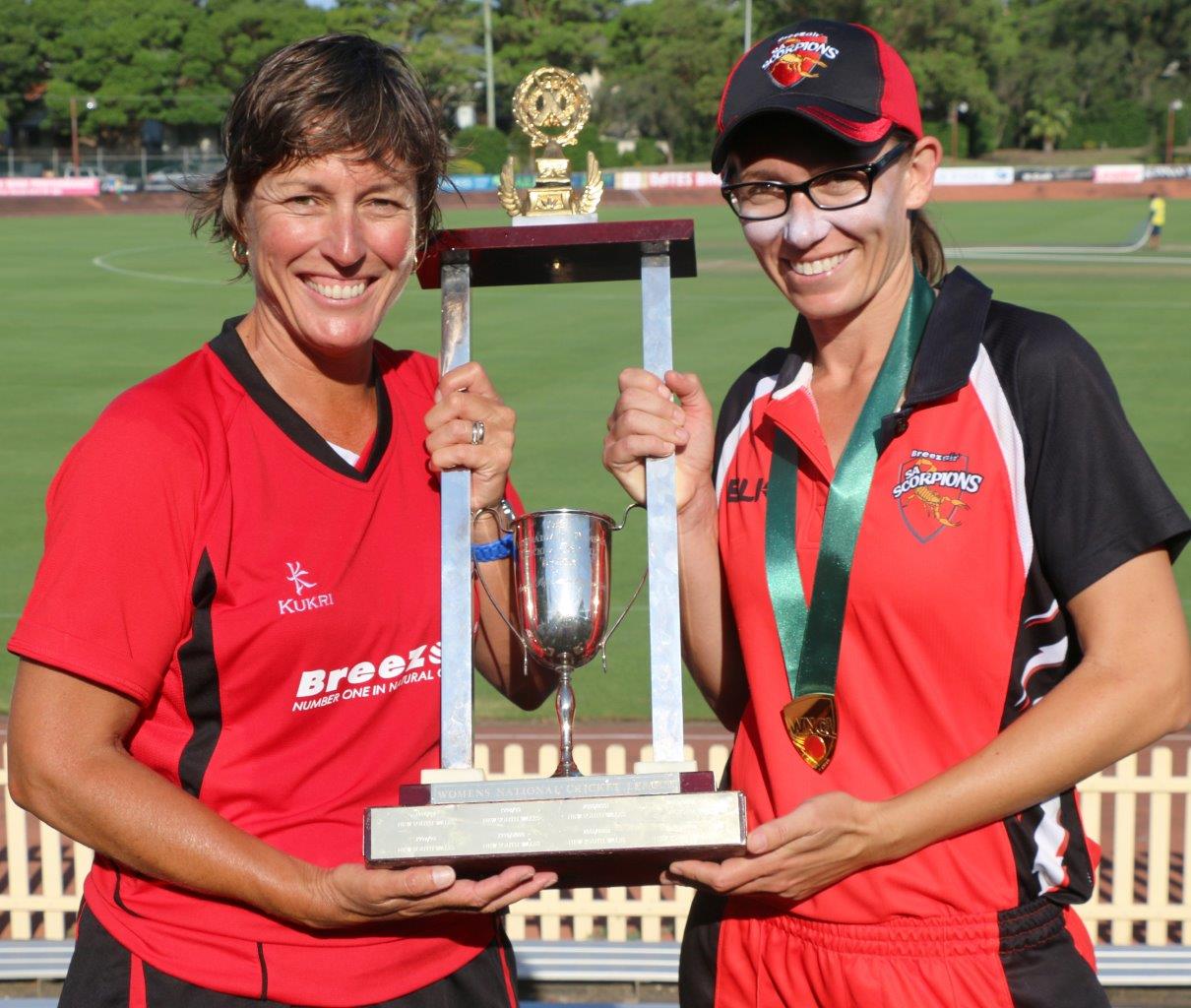 Winning the toss and batting first, a second wicket partnership of 181 between Kangaroo Islander Bridget Patterson and English import Sarah Taylor set up the big total.

Player of the match Taylor displayed her class with a brilliant 110 from 106 deliveries faced including 14 boundaries.

Then with astute field placement by Ebsary, electric fielding and consistent lines by the bowlers, the previous champions were restricted to 210.

The skipper led from the front in the field, effecting the run out of NSW opener Rachael Haynes with the score at 37.

“This is the pinnacle,” said Ebsary, who has played one test and 33 shorter form games for Australia.

“It has been surreal for the first 24 hours, finally holding this trophy.”

She said SA had “bridged the gap” with NSW.

“The team learnt a lot from competing in the final last summer.

“With five wins out of six during the regular and a victory in the final we felt like the top team this year.

“We now have the building blocks for a dynasty over the next decade.”

“We have a very young side, which is a good sign for the future,” Betts said.

“The journey is been a special already, to realise I’m not 20 yet and I now have a WNCL title and hopefully there are more to come.

“During the last couple of seasons under Max (McCauley) it has been a great program to be involved in.”

NSW, currently coached by South Australian and McCauley’s strike bowler in the 1990s Joanne Broadbent, has won 17 of the last 19 WNCL titles. They were attempting to equal National Rugby League side St George’s record of 11 consecutive premierships in a major Australian sport.

With the inaugural Women’s Big Bash League/01 on our doorsteps, Ebsary and McCauley will lead the women’s Strikers into that tournament as well.

Their opening match is on December 13 against the Hobart Hurricanes at Aurora Stadium in Launceston.