And so it was yesterday as Redbacks captain Travis Head’s breakthrough century helped South Australia to a nailbiting one-wicket win against Western Australia in their Sheffield Shield game.

It came down to the final session and anything was possible – a win, a loss or a tie – when bowling all-rounder Joe Mennie made a hero of himself, hitting the winning runs with number 11, Chadd Sayers, at the other end.

“It was a fantastic win, pretty nerve racking at the end,” Head said after the game.

“I didn’t watch for a while near the end…I didn’t see the winning runs, I wasn’t watching for the last six or seven (overs).

“Me and ‘Cossie’ (Mark Cosgrove) were going through photos for the last 10 runs and when we heard the cheer, we knew the result. It was a really good win.”

Head said the key, as had been proved through the length of the game, was “not to expose your tail to the new ball”.

“While we didn’t achieve that in the end, we knew the boys (in our tail) could hold a bat,” he said.
The contest had a number of momentum swings over the four days. With WA at 2-217 on day three, and Cameron Bancroft and Shaun Marsh at the crease, the Redbacks’ chances of victory looked modest at best.

But this young group hung tough, showing the character and resilience required of a good cricket team.

The visitors lost 8-82 and finished their second innings on 295, after the SA bowling attack of Mennie, leg spinner Adam Zampa, Kane Richardson and Sayers all had an impact.

It left the Redbacks with a testing 316-run fourth innings chase.

After Mark Cosgrove produced a patient 63, the SA boys were cruising after tea at 4-269 with centurion Head and Alex Ross at the crease.

But a brace of quick wickets followed, and when Tim Ludeman trudged back to the pavilion the hosts found themselves seven down, with 25 runs still required for victory.

Zampa produced a typical cavalier knock before being the eighth wicket to fall at 302, and when Richardson was caught behind at 308, the last pair of Mennie and Sayers still required eight more runs. 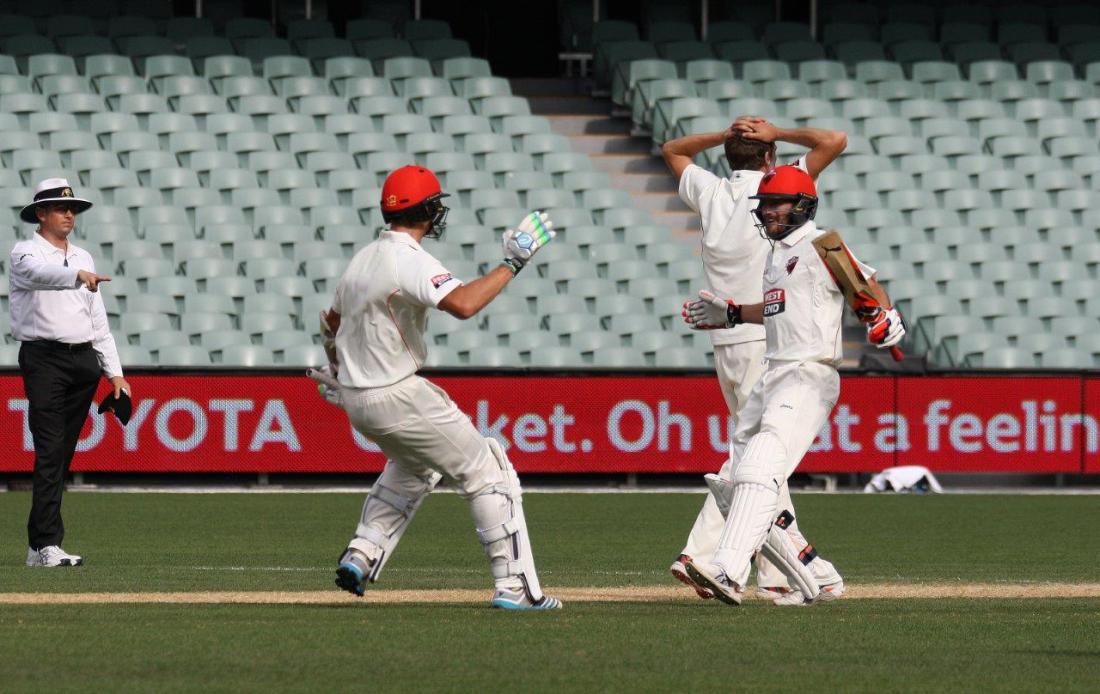 It was a Mennie cover drive to the boundary that claimed victory, but the undoubted highlight of day four was the skipper’s breakthrough century.

Still just 21 (22 in December), Head is one of this nation’s brightest batting hopes, having ascended to the captaincy mid-last season.

In his 35th first class match, after 17 half centuries and five scores in the 90s, the former South Gawler junior and Tea Tree Gully talent raised the bat for the first time after a Sheffield Shield ton, smashing a boundary head-high through the covers between two fieldsman.

It sparked emotional celebrations from the aggressive left hander, whose captain’s knock saw him honoured as Man of the Match.

“I had been pretty frustrated throughout,” Head explained.

“I got some good runs early in the Matador (Cup) but not in the back end (but) I worked really hard in the nets and feel really good at the moment.

“As a leader I want to lead from the front.”

With a round three trip to South Australian cricket’s traditional graveyard, the Gabba, this victory will give the youthful Redbacks squad plenty of confidence for the remainder of the summer.

SA takes on the Bulls from Saturday, November 14.