Allen, 47, represented Australia on 182 occasions after coming through the ranks at Burnside Hockey Club, earning the respect of high-flying national teammates with her reputation as a tenacious and hard-working defender.

Her playing career overlapped with the golden era of Australian women’s hockey through the 1990s and early 2000s, during which she won two World Cups, three Champions Trophies and a Commonwealth Games Gold Medal.

But her most famous victory came at Sydney 2000 where she played in every minute of an eight-game tournament to help the Hockeyroos defend their Olympic title with a raucous home crowd at their back and the weight of an expectant nation on their shoulders.

That gold medal-winning squad will soon boast three members in the SA Sport Hall of Fame when Allen later this year follows in the footsteps of teammates Juliet Haslam (2010 inductee) and Alison Peek (2019 inductee).

Now living in Perth and working as an assistant coach for the Hockeyroos, Allen said the recognition from her home state came as a surprise.

“It came a bit out of the blue,” she told InDaily.

“But I guess for me, South Australia was where I was born, where I grew up and spent the first 20 odd years of my life … so it’s an important place.

“So to be recognised by the state and the Sport Hall of Fame is a pretty special honour.”

She is the fifth and penultimate member of the class of 2021 which boasts Australian cricketer Jason Gillespie, Olympic diver Valerie Beddoe, sailing administrator David Tillett and wheelchair basketballer David Gould.

The final member of the 2021 intake will be profiled by InDaily next Monday ahead of the black-tie Hall of Fame night at Adelaide Oval on April 8.

Growing up in a sports-mad household in Norwood, Allen played hockey, netball, cricket, tennis and basketball with her brothers.

Asked why hockey was the one that stuck, she says: “It was just opportunity I think.”

“I just remember playing everything and being a really sporty kid … but I certainly didn’t know hockey was the one,” she said.

She joined the highly-rated Burnside Hockey Club and would eventually get a call up to the senior women’s program where she had the opportunity to push her career to new heights alongside some of Australia’s best players.

She also remembers as a 14-year-old watching the Hockeyroos win their first-ever Olympic gold medal at Seoul 1988 and the influence it had on her ambitions. 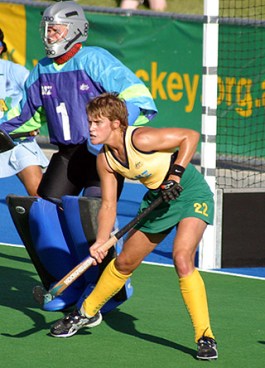 “I watched the whole thing and I think that was really inspiring, I just loved it,” she recalls.

“Those bits and pieces all add up to then keep on going with the sport.

“Sandy Pisani – who played in that ’88 Olympic team and was a former captain of Australia – was in my Burnside club team.

“So we had lots of that exposure to people who were already playing at that next level, which influenced me a lot.”

Drawn in by the “rush” of international competition, Allen would work her way through state team selection and earn spots on the Australian under 18 and under 21 squads.

But the young defender’s first call up for the Hockeyroos came as a complete shock.

“I was just playing the national under 21s in Perth and they said ‘we need you to go to the World Cup in three days – the team’s leaving and you need to get your passport’,” she said.

Liane Tooth, Australia’s veteran starting full back, had suffered a late injury ruling her out of the 1994 Hockey World Cup in Dublin. A “petrified” 20-year-old Allen was hurriedly called up to replace her. 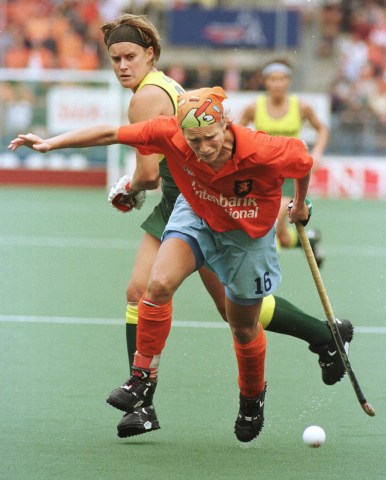 “I certainly hadn’t been a prominent member of that team at all before that … I guess they might have wanted to expose someone else and gave me a go, so it was very out of the blue.”

To add to the shock, Allen would watch from the bench as Australia dropped their first game of the tournament to hockey minnows Russia.

But the loss meant the coaches handed Allen her first chance at full back, and she managed to impress enough to hold her spot for the rest of the World Cup.

Australia would go on to win the tournament outright.

“Anything was a bonus for me, it was fortunate to have that approach because I had nothing to lose – it was just all very exciting,” she said.

“I really enjoyed that level of competition being heightened and playing against teams you’ve never seen before.

“And [Australia] was a really good team, so you could slot in and play your part, you didn’t have to do everything else.”

Allen backed up her debut performance by anchoring the Hockeyroos defence at their successful 1995 Champions Trophy campaign in Argentina. After well over a year embedded with the national team, the 22-year-old’s spot in the side felt secure and she was looking ahead to her first Olympics in Atlanta.

“It took me completely by surprise, I was very naïve thinking I’d just be in,” Allen recalls.

You have those real doubts about whether you’re good enough or whether it’s worth it to keep on going.

In early 1996, a confident Allen made a scheduled 2am call to Hockey Australia to find out whether she’d been selected for her first Summer Games.

She realised very quickly she wasn’t on the list.

“It really affected me for a long time, I was terrible after that,” Allen said.

“It was kind of that feeling of ‘they don’t believe in me anymore’ … you have those real doubts about whether you’re good enough or whether it’s worth it to keep on going.

“It was my first real experience of missing out and the hard side of high-level sport.”

Compounding matters, the squad she was left out of would go on to win gold in Atlanta.

“It was really mixed [emotions] at the time: happy but not really.” 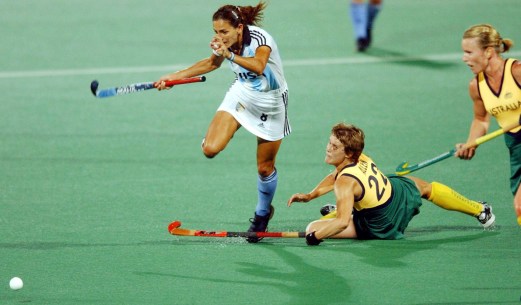 Reflecting on this “bitter” disappointment more than 25 years later, Allen regards it as one of the most important experiences of her career.

Able to “recommit” to the sport and narrow her focus down to what the selectors demanded of her, she would earn selection at Australia’s next three major international tournaments.

“It just gave me a bit of perspective and understanding of the bigger picture that you can work really hard at things and potentially not get what you want,” she said.

“That’s definitely something I have taken with me through the rest of my life.

“It was good to work out that I still wanted to do [hockey] … and it was going to be hard.

“I think that made me value it more heading into the 2000 phase, I knew that I couldn’t take it for granted so that probably made me work harder.”

The Hockeyroos were red hot favourites to defend their Olympic crown in 2000 after winning the 1998 World Cup and a Commonwealth Games gold medal the same year.

But Allen was not as fancied to make the 16-woman squad for Sydney after being left out of the team for both the 1999 and 2000 Champions Trophy campaigns.

By mid-2000, Allen had only a handful of warm-up games left to make the team. 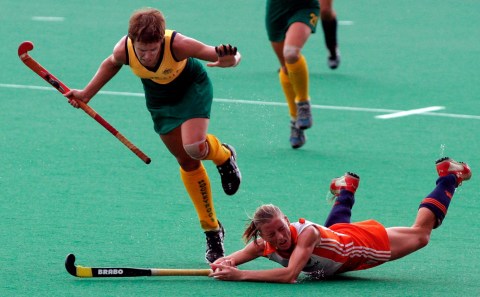 Allen avoids the Netherlands’ Mijntje Donners as she takes a fall during their Champions Trophy match in Sydney, 2003. (AP Photo/Dan Peled)

“I remember [Hockeyroos coach Ric Charlesworth] saying at the beginning of that period: ‘it’s crunch time … you’re going to have to play well consistently for every game – and then you still might not make it’,” Allen recalls.

“That’s a really hard thing to hear, but I think again it’s a lesson in clarity.”

Considering herself a 50/50 chance of selection with no inkling as to whether she’d make the cut, Allen picked up the phone to make her scheduled call to Hockey Australia.

This time she heard the news she wanted.

“I was extremely excited and surprised, and valued every moment from then on,” she said.

“I was very much appreciative of it because it wasn’t guaranteed, that’s for sure.”

Allen soon found herself playing in front of 15,000 home supporters in the biggest eight-game tournament of her career. She led a stellar Hockeyroos defence that kept three clean sheets and conceded just five goals for the entire Olympics.

“Having everyone going for you, that was like nothing I’d ever experienced and never will experience again,” she said.

“I had a real appreciation not being there four years before and I had a real focus, so all of those things helped just get the job done.

“And we had really good players, you just knew that they would do their job, you’d do yours, and I felt quite comfortable – although nervous as hell.”

The undefeated Hockeyroos finished top of the medal round to qualify for the gold-medal match with Argentina. The Australians took a 3-0 lead within 40 minutes and the South Americans were never able to recover.

Allen stood atop an Olympic podium, just four years after questioning her future with the sport that brought her there. 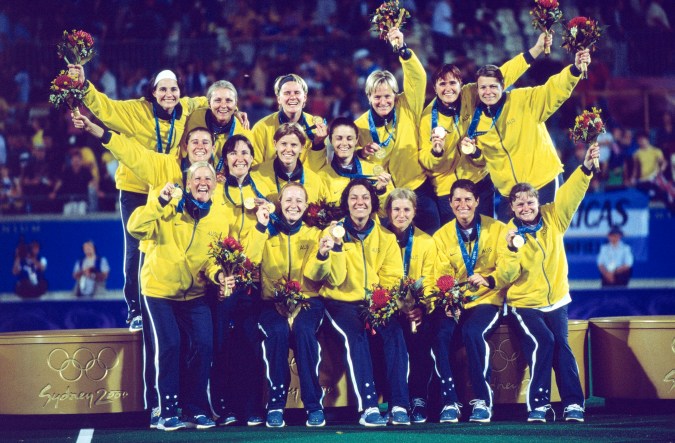 Following an unsuccessful Olympics in Athens, Allen’s playing career petered out and she turned her attention to life off the pitch.

After four years in admin with the Australian Sport Commission, she took over as Head Coach of the Victorian Institute of Sport’s hockey program and would later become Victoria’s first woman head coach of a men’s premier league hockey team.

Allen has since risen to the rank of assistant coach with the Hockeyroos. Last year, she travelled to her first Olympics as a coach to see the national side sent home in heartbreaking fashion after an upset 1-0 loss to India. 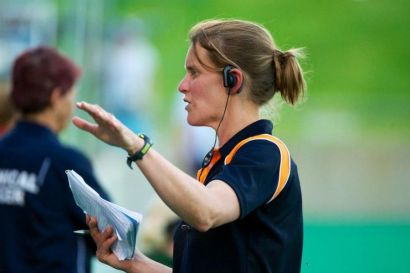 Allen coaching with the Victorian Institute of Sport (Photo: VIS)

“People lose their jobs because they haven’t won, there’s a lot riding on that win or loss.

“So I love the challenge of getting a team and players to be in a position where they can win and do really well – that’s the best part of it.

“Then the other side is when you don’t get there, it’s over, and you’re going home.”

Allen has also taken her experiences as a player to inform her process as a team selector.

“I really made sure that the most important thing was to never be rushed or flippant or dismissive of players and selection,” she said.

“You try and remove the bias and your past experience and give every athlete your time and consideration for selection, because I know how much I’d invested as a player and how it doesn’t matter whether you’re good enough or not, you invest the same.

“You need to respect that as a coach and selector and never take that lightly.”

Allen recently completed an honours degree in psychology and is exploring whether to pursue a masters or take on an internship in school psychology.

The 2021 class will be inducted into South Australian Sport Hall of Fame at a black-tie event at Adelaide Oval on April 8. For more details and to purchase tickets, go here.