The three-time SANFL premiership winner, who played 392 senior games for the Magpies and dominated South Australian football in the 1970s and ‘80s, was unanimously recognised this week by the Hall of Fame Board of Governors as an athlete who holds “a revered place within the community” and delivered “exceptional performances that are almost beyond belief”.

Only Sir Donald Bradman, Bart Cummings, Victor Richardson, Gillian Rolton, Anna Meares and Ebert’s long-time friend and former rival Barrie Robran have been bestowed with “legend” status since the Hall of Fame was inaugurated in 2010.

On Thursday, Robran and Hall of Fame selection committee member Bruce McAvaney presented the award to Ebert and his wife Di at their home.

Robran paid tribute to the long-time Port Adelaide captain’s skills on the football field and the influence he had on South Australians throughout his playing career, while McAvaney lauded Ebert’s community work to reduce domestic violence, educate youth and support children with disability.

Upon learning of the award, Ebert – who has been battling an acute myeloid leukemia diagnosis since December last year – said he was “uncomfortable being elevated above others but I honestly believe this is about the contribution of my family, the club and community that have contributed along the way”.

“These types of awards are for everyone no matter what small or large part they played and so I thank everyone for the part they have played in my journey and in this acknowledgment,” he said.

“They all deserve a piece of the acknowledgement for themselves.

“I feel this represents our great state, our sporting community and clubs and in particular our sporting volunteers.”

McAvaney, whose start in sports media coincided with the latter half of Ebert’s playing career, described the Port Adelaide legend as “one of the great footballers I’ve seen in my lifetime”.

“I hadn’t seen him since he’d taken ill, and he was in wonderful, brilliant spirits,” McAvaney told InDaily after the presentation.

“He was uplifting, he was humble, he was all the things that Russell is – and just to be in the same room as Barrie and Russell … it was quite an experience and one I won’t forget.”

“He could play anywhere: he could take a high mark, he was strong through the hips, he was beautifully balanced, he had a beautiful kick on him, he was completely courageous [and] highly skilled,” McAvaney said.

“There wasn’t much he couldn’t do, and when they did play against North Adelaide or against Sturt, he was playing against people like Robran or people like [former Sturt captain Paul] Bagshaw or some of the other greats.

Russell Ebert during his playing days with the Magpies (Photo: Supplied/PAFC)

“It was a bit of a golden period … and Ebert was one of the greatest players in that period.”

Originally from the Riverland, Ebert started his career with the Magpies as an 18-year-old full-forward and took out the club’s leading goalkicker award in his first season – playing an integral role in a Port Adelaide side that would eventually finish runner-up to Sturt in the 1968 Grand Final.

Three years later and after a move to midfield, he would win his first of four Magarey Medals.

Ebert remains the only quadruple winner of the SANFL’s best and fairest award, an achievement McAvaney rates as the Port Adelaide star’s greatest given it occurred in the pre-AFL era.

“The one thing that he has that no one else has is four Magarey Medals,” McAvaney said.

“It’s a badge of honour in many ways, the Magarey Medal is still a wonderful achievement … but without reducing what it is now, it was of a higher standard the competition in those days.

“That’s the one thing I think that of all the things he’s done that is unique and extra special, and so hard earned because he was playing against such great players, including Robran.”

Robran and Ebert would take home seven Magarey Medals between 1968 and 1980. The two titans of South Australian footy, both immortalised with statues outside Adelaide Oval, have been the subject of decades of debate as to who was the better player.

Queried on the subject in 2012, Ebert responded in typically humble fashion: “Barrie was just the best.”

“If they don’t put Barrie Robran right at the top of the list – whether you’re talking Victoria, Western Australia, Northern Territory, South Australia, Tasmania – if you don’t put Barrie as the number one then you haven’t watched him play enough,” he said.

“He was absolutely standout best player I’ve ever played against, played with or seen.”

McAvaney said it was “perfect” that Ebert was joining Robran as only the second footballer recognised as a Sports Hall of Fame legend.

Ebert and Robran have enjoyed a long friendship after football (Photo: supplied)

“I think it’s beautiful that Barrie and Russell are in together, because whilst they played for other clubs, they are in many ways connected in a way which is even closer than teammates,” McAvaney said.

“In that SANFL period, it’s pretty hard to argue that Robran and Ebert aren’t the two greatest, and that’s the way we’ve obviously seen it and we’ve promoted them as legends.”

Ebert’s first premiership came in 1977 – his fourth season as captain – when Port Adelaide edged past Glenelg by eight points in front of more than 55,000 people at Football Park.

The flag ended a premiership drought of 12 years for the Magpies and a run of four grand final losses for Ebert, who told the crowd after the game “it’s taken us a bloody long time but by jeez it’s worth it”.

“They didn’t dominate premierships when Russell was playing,” McAvaney said. “But the club itself still had the biggest aura about it and he was the biggest player, so it was thrilling to watch him play.”

After nearly a decade of VFL clubs vying for his signature, most notably Carlton, Ebert was eventually lured to North Melbourne for one season in 1979.

The then 30-year-old proved himself in the Victorian league, leading the Kangaroos in disposals and spearheading the club’s path to a preliminary final berth.

“He had a very fine season, he didn’t dominate that league like he dominated here but he certainly had a very strong season at North Melbourne,” McAvaney said.

“What they saw was a top-class player, fully committed, so professional, who week in week out produced the goods.

“It was a great experience for him, I’m sure it was important for him to have done that [and] dipped his toe in that water.

“And then to come back to Port Adelaide and be very successful with the club both personally and also collectively was fantastic for him, so the timing was probably pretty good.”

Ebert didn’t miss a beat upon his return to the SANFL in 1980, taking home his fourth Magarey Medal and leading the club to back-to-back premierships in ’80-81 off the back of the club’s premiership triumph without him in 1979.

The veteran also took home his first Jack Oatey Medal for his best on ground performance in Port Adelaide’s 51-point defeat of Glenelg in the 1981 Grand Final, along with his sixth club best and fairest award.

At the twilight of his career, Ebert would move to the role of captain-coach following the departure of John Cahill to Collingwood in 1983. 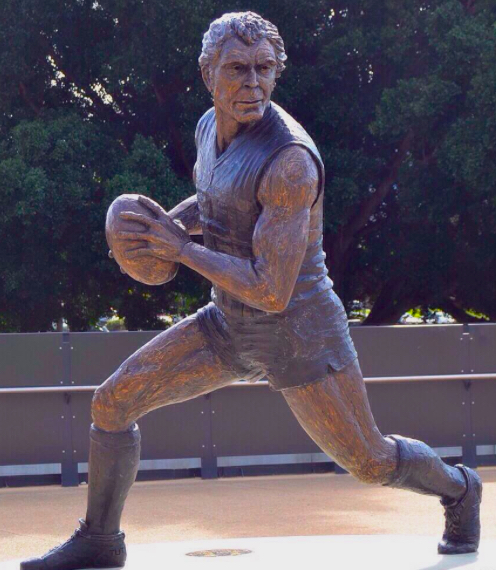 Ebert’s statue outside the eastern gates of Adelaide Oval. The monument was unveiled in 2015 (Photo: Wikimedia commons)

Port Adelaide’s 1984 campaign – in which they finished minor premiers but were pipped by arch-rivals Norwood in the Grand Final – remains the last time in SANFL history a player-coach has taken their team one-win shy of premiership glory.

Ebert retired the following season at the age of 36 but stayed on as Port Adelaide coach until 1987. He would then spend three years as coach of Woodville and later took the helm of the South Australian state team for three games in the late 1990s.

Despite his enormous contributions across more than three decades, Ebert’s supporters say his community work off the field has been equally significant.

“That’s been such a big part of his legacy and the man that he is,” McAvaney said, highlighting Ebert’s fundraising and ambassador support for disability services organisation Novita and the Power to End Violence Against Women youth program.

“That community spirit that he has and all he’s been able to do for youth and violence against women … that’s the ultimate, I think, is to be a champion not just on the field but off.”

The Ebert family this year launched a “Team Russell” blood donation drive in a bid to make sure others can compensate for Ebert’s inability to donate blood this year due to his illness. As of June, there have been more than 700 donations to the campaign.

Robran on Ebert: The footy legend facing his greatest test

“When you’re in Russell’s presence, there is this humbleness – it’s a genuine humility but it’s also a strength of character,” McAvaney said.

“We all know Russell’s situation, I mean it’s grim, there’s no getting away from that.

“But there was not a mention of that, there wasn’t anything negative. It was all about today, a bit of the past and a bit of the future.”

After the presentation, Ebert said the tributes of McAvaney and Robran had made him feel much better about humbly accepting the prestigious Hall of Fame designation.

“I honestly didn’t feel worthy of this before today’s presentation,” he said.

“But following these kind words, I am certainly feeling much more comfortable with the title of Legend.”