The pair had upset the Canadian world No.1 pair to reach the final four in Tokyo and backed it up with a controlled 23-21 21-13 defeat of Tina Graudina and Anastasija Kravcenoka on Thursday.

Set to play Americans April Ross and Alix Klineman in the final, the Australians are assured the country’s second Olympic medal in the sport after Natalie Cook and Kerri Pottharst’s famous Sydney 2000 gold.

Tensions were rising but Clancy stopped the rot with a devastating spike winner off the second shot, del Solar then holding her nerve on serve to clinch the advantage with their third set point.

The Latvians had won their previous clash with the Aussies and didn’t go away, jumping to a three-point lead to begin the second set.

But Australia called a time-out and dominated after the resumption of play, Clancy’s big serve firing as they levelled at 10-10 to seemingly break the Latvian defence.

“Nerves are normal, but you try to turn them into positive fire, excitement, aggression,” Artacho del Solar said.

The US are assured of a beach volleyball medal for the seventh straight Summer Games. That’s every one of them since the sport was added to the program in Atlanta in 1996. 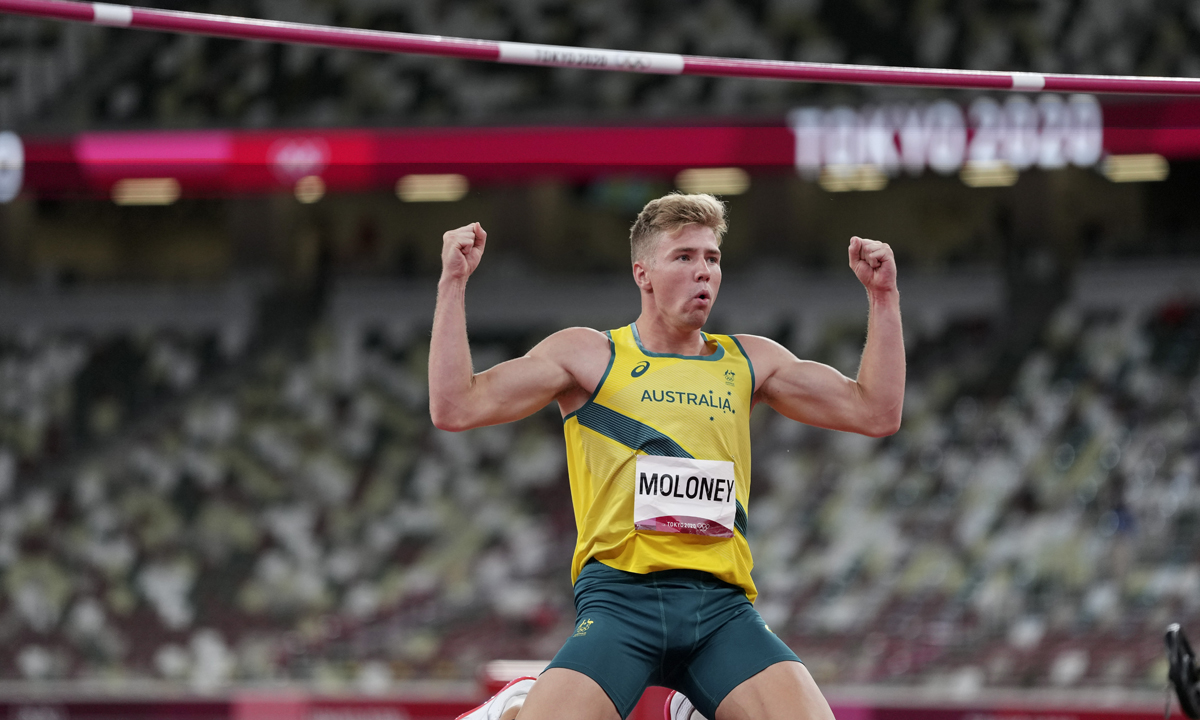 Australian Ash Moloney remains in the silver-medal position after seven of 10 events in the Olympic men’s decathlon.

Moloney, 21, made an excellent start to day two with a personal best of 14.08 seconds in the 110m hurdles and then followed up with a solid 44.38m throw in the discus.

With three events to go, Moloney has 6359 points, leaving him 251 adrift of pacesetter Damian Warner from Canada.

Another Canadian, Pierce LePage is in third spot with 6265, while Australia Cedric Dubler is back in 18th spot.

No Australian has ever finished in the top five in an Olympic decathlon.

Moloney finished day one in commanding style on Wednesday with the leading performances in the high jump (2.11m) and his pet event, the 400 metres (46.29sec).

The 2018 world junior champion had 4641 points after five of 10 events, just behind the early pacesetter, Canadian Damian Warner (4722), who began the competition with a blistering 100 metres run of 10.12.

“It’s been a bloody long day. My first Olympics and the schedule’s way out of my comfort zone,” said Moloney last night.

“It’s been an awesome day. I’m in a decent position but I’m really going to pick up on day two to keep that place.”

Australian Cedric Dubler was in 15th spot on 4184, having battled a hamstring injury in the lead-up to the Games.

Australian medal contenders Nicola McDermott and Eleanor Patterson have both soared into the Olympic women’s high jump final in Tokyo with a minimum of fuss.

National record holder McDermott sailed over at the first attempt at all four of her heights in the preliminary round on Thursday, including the automatic qualifying mark of 1.95m.

Patterson, the 2014 Commonwealth Games champion, was only marginally less impressive, missing once at 1.95m before joining the group of 14 women who advanced to Saturday’s final.

McDermott is ranked third in the world this year courtesy of her Australian record jump of 2.01m at the Stockholm Diamond League meet, while Patterson also sits inside the top 10.

Australian paddlers Tom Green and Jean van der Westhuyzen have continued their sizzling form to be contending for gold, while Alyce Wood will also race for an Olympic canoe sprint medal later today.

After posting a K2 1000-metre Olympic record in the heats, Green and van der Westhuyzen backed up to win their semi-final.

While it wasn’t close to their heat time, it was still the fastest race of the day with world champions Germany winning the other semi-final.

Green and van der Westhuyzen had clear water on the field at the 750m mark and eased off, with crews from New Zealand, China and the Czech Republic also qualifying for the medal race later on Thursday.

The 22-year-old Queenslanders are looking to surpass Australia’s bronze medal in the event in Rio 2016, won by Ken Wallace and Lachlan Tame.

Competing in the same semi-final, Australia’s other pair Jordan Wood and Riley Fitzsimmons missed out on the final.

The Kiwi great blasted out of the start to set the pace, with Wood edging out Serbian veteran Milica Novakovic for the second qualification spot.

Bull crossed the line in fourth. 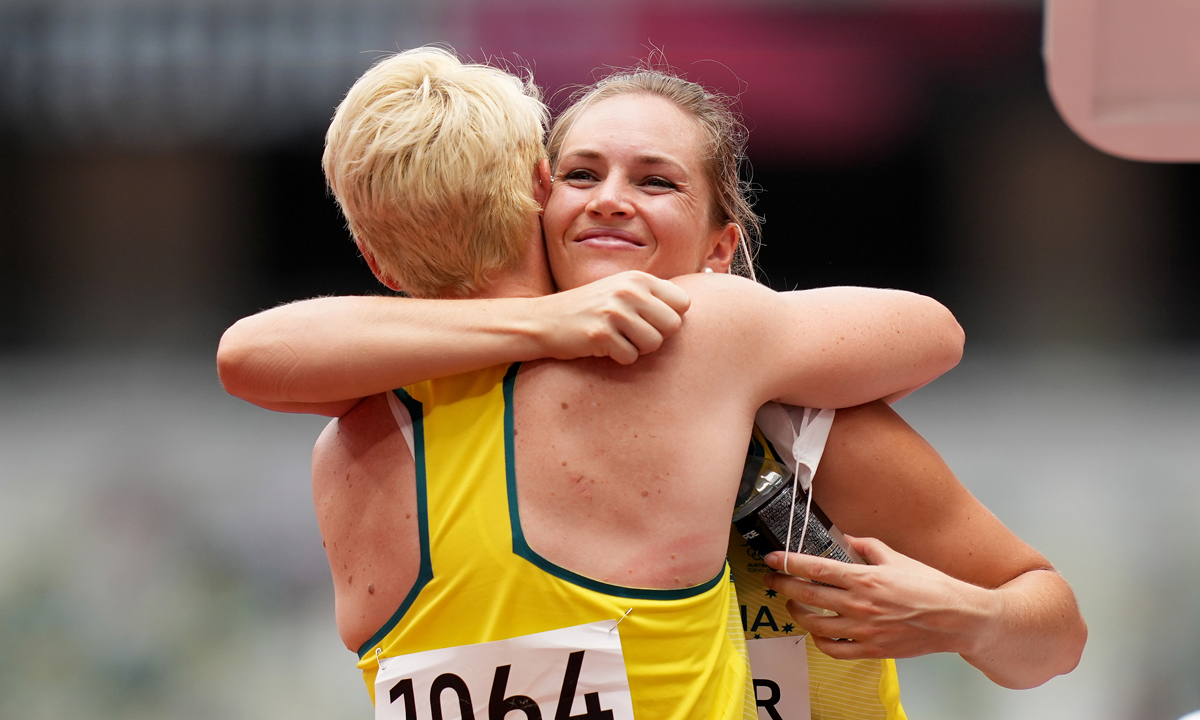 Australian javeklin throwers Kathryn Mitchell and Kelsey-Lee Barber during the Women’s Javelin Throw qualification round in Tokyo this week. at the Olympic Stadium during the Tokyo Olympic Games, in Tokyo, Japan on Tuesday, August 3, 2021. Picture: Joe Giddens/AAP

Kelsey-Lee Barber’s approach to the Olympic women’s javelin final will be a pretty straightforward one – start off the same way that she finished the qualifying round.

Barber has a deserved reputation as a clutch thrower on the sport’s biggest stages.

She became Australia’s only gold medallist at the 2019 world championships in Doha by moving all the way from fourth place to first with a massive final-round effort of 66.56m.

The 29-year-old was at it again in the Olympic javelin qualifying competition on Wednesday.

Staring down the barrel of an ignominious early exit after two poor throws in what to date has been a mediocre year, Barber smashed out a 62.59m effort which saw her advance to the final in third spot overall.

The last throw of the dice approach makes for exciting viewing.

But Barber and her coach and husband Mike Barber know full well there’s a better way.

“I feel really clear about what I need to do now and how I go about that, so that’s the energy I want from the very beginning,” Barber told AAP.

“I can only push forward from there.”

Poland’s Maria Andrejczyk – who tops the 2021 world list with a massive throw of 71.40m back in May – will be the deserved gold-medal favourite in Friday’s final in Tokyo.

But in 2019 world champion Barber, reigning Commonwealth Games gold medallist Kathryn Mitchell and Mackenzie Little – who smashed her PB in the qualifying round – Australia will have a full complement of three for the first time in any Olympic throwing final.

“It speaks values to our throwing community back home and what we’ve been able to achieve as a country,” said Barber.

“Three different coaches producing three different female athletes in a final is unbelievable and it makes me super proud to be part of that Aussie group making history.” 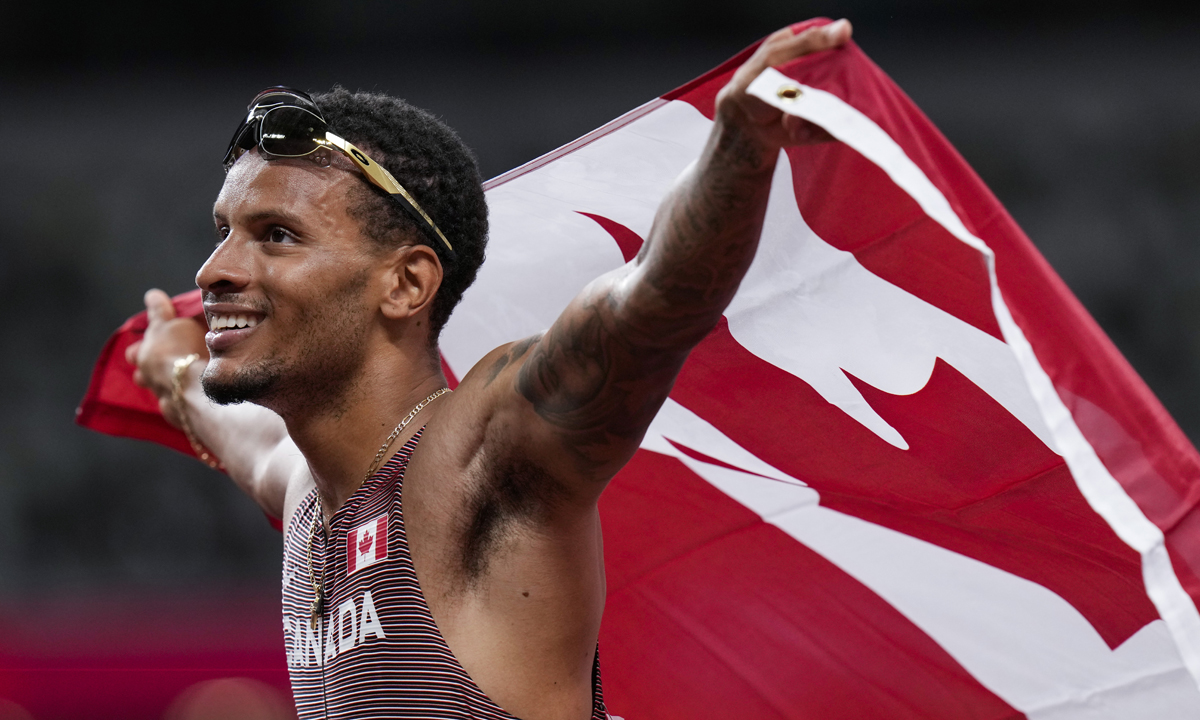 Andre De Grasse, of Canada, celebrates as he wins the gold medal in the final of the men’s 200-metres in Tokyo. Picture: Francisco Seco/AP

Perhaps the world’s next sprint star wasn’t so hard to find after all. For while Usain Bolt went away, the persistent Andre De Grasse never did.

De Grasse, the brilliant Canadian who ran his first sprint as a teen in baggy basketball shorts and borrowed spikes, at last has an Olympic gold medal in the 200 metres as his deserved reward after a career of near-misses in the Bolt era.

De Grasse powered past Americans Kenny Bednarek and Noah Lyles to finish in 19.62 seconds on Wednesday and take one of the titles that the great Bolt had owned for the previous three Olympics.

It fills out a medal collection for the 26-year-old that was only missing gold, after he’d amassed two silvers and six bronzes at Olympics and world championships since 2015.

Four nights earlier, it had been another case of so near but so far as he took bronze in the 100 metres – just as in Rio four years earlier – that he might have been expected to win.

Given all he’s been through, it was no surprise when he revealed that he’d been crying behind shades he wore for the race.

“It’s my first time being so emotional on the track,” De Grasse said. “I always thought I came up short winning bronze and silver, so it’s just good to have that gold medal. No one can take that away from me.”

Georgian is strongest man in world 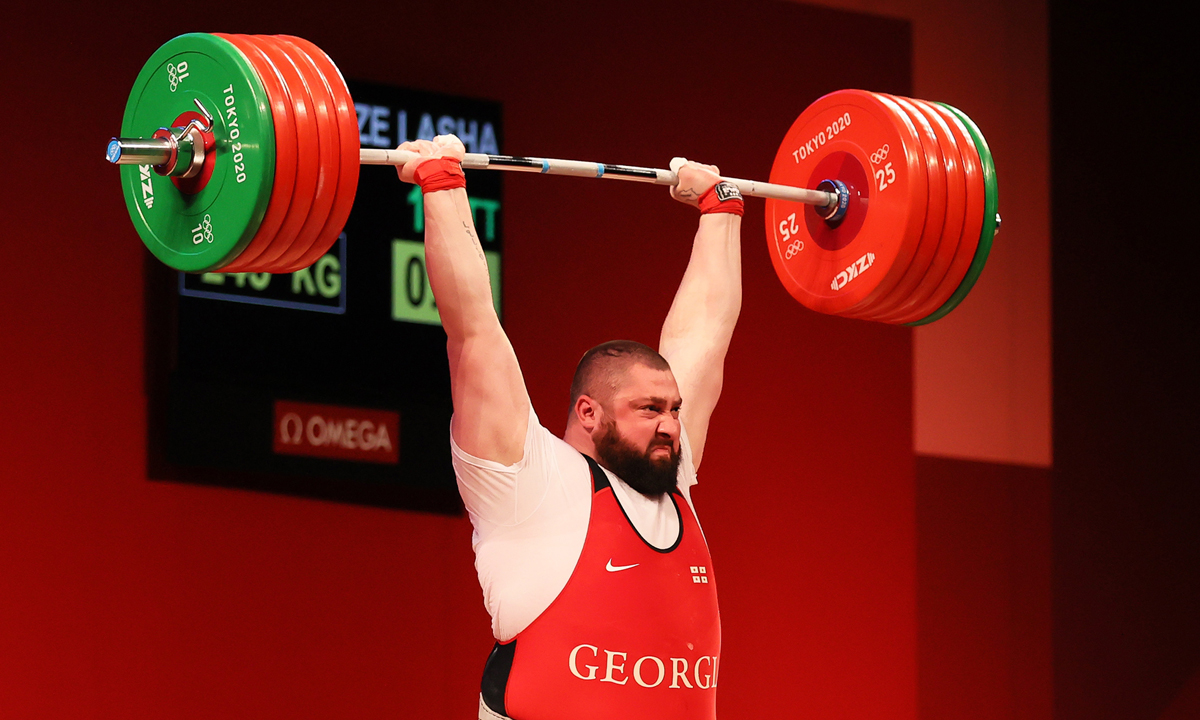 Lasha Talakhadze pumped everyone up with three world records in the heaviest weight class on the final day of Olympic competition in weightlifting.

The defending champion from Georgia again earned the unofficial title of world’s strongest man as he lifted a new landmark 223 kilograms in the snatch and 265kg in the clean and jerk for a total 488kg last night.

It broke his own world records in the over-109kg men’s super-heavyweight category.

Even Talakhadze’s starting lifts were more than anyone else attempted, which meant he had to lift three times back-to-back in each half of the competition.

Talakhadze immediately pledged to return for a third Olympic gold in 2024, and his feat in Tokyo raised the question of whether he could become the first man to lift the once undreamed of total of 500kg.

Weightlifting’s place at the next Olympics is still uncertain. The International Olympic Committee wants the sport’s governing body to pass a new constitution before it will confirm it on the program following years of doping and corruption allegations.

The effort to introduce a new constitution stalled at an International Weightlifting Federation meeting in June.