Kerr, who looked to be struggling late in the quarter-final extra-time win over Great Britain, has played every minute of the Matildas’ campaign so far and is one of five players in danger of missing a start in Australia’s semi-final berth.

But the high of delivering one of Australia’s greatest wins is yet to wear off and the side is adamant it can once again push through the pain barrier and vanquish past demons when it faces the Scandinavians for the second time this tournament.

“We have a couple of question marks, we are deep into the tournament,” Matildas coach Tony Gustavsson said.

“I want to be very clear… It’s not just about the starting line-up it’s about the finishing line-up.”

A brace from inspirational skipper Kerr and a goalkeeping clinic from Teagan Micah secured a 4-3 upset quarter-final victory over the Brits on Friday night.

It was the Matildas’ first knockout win at an Olympics or World Cup since 2015 and guaranteed they’ll play off for a medal.

But today they must face Sweden, the tournament’s most impressive side so far who beat them 4-2 in last week’s group stages, with Kerr potentially coming off the bench this time.

Gustavsson says the Matildas will need to lift their game to another level again to defeat his native Sweden.

“I do have an impression of Sweden and that’s [they are] very impressive. So far they have been the best team in the tournament, looking at how they play,” Gustavsson said.

“The best way to avoid having Sweden attack against is to make sure we have the ball,” he said.

The Australians haven’t defeated their coach’s home nation in 11 games stretching back 24 years.

On Sunday, Australia shone in the pool, on the open water and at the skate park to make history at the Tokyo Olympics.

When sailor Matt Wearn clinched his win in the Laser class on Sunday afternoon, it became the first time Australia had won four Olympic gold medals in one day. 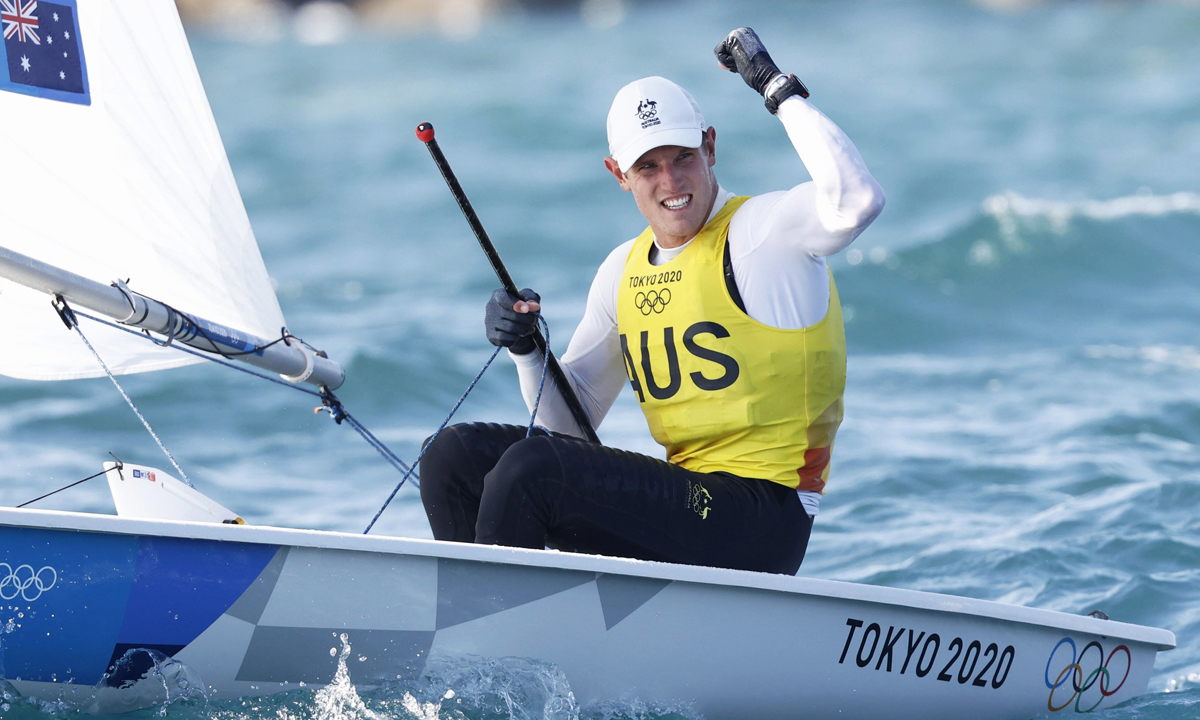 Matt Wearn of Australia reacts after winning gold in the men’s sailing laser class at the Tokyo Olympics. Picture: Kyodo via AP Images.

Swimmer Emma McKeon ticked off several historical markers earlier in the day when she won the 50m freestyle and then combined with Kaylee McKeown, Chelsea Hodges and Cate Campbell to take out the 4x100m medley relay.

Logan Martin then dominated the men’s BMX freestyle, not needing his second medal run to triumph in the sport’s riveting Olympic debut.

Wearn had an unbeatable lead going into his medal race, meaning he only had to finish and not be disqualified to secure gold.

Elsewhere, Peter Bol has rocketed into medal contention at the Tokyo Olympics after improving the Australian 800m record for the second time in as many days.

Bol won his semi-final in one minute 44.11 seconds on Sunday night, stripping two-hundredths of a second off the mark he set in the opening round.

He will be the first Australian man to contest an Olympic 800m final since Ralph Doubell won the gold medal in Mexico City in 1968.

Rising sprint star Rohan Browning was left to rue a slow start after finishing fifth in 10.09 seconds in his semi-final on Sunday evening in Tokyo.

Only 24 hours earlier Browning had improved to second on the Australian all-time list by winning his opening-round heat in 10.01, raising hopes he could join countryman Patrick Johnson as the only members of the exclusive sub-10 second club.

Meanwhile, Australia’s women’s water polo side will play Russia in the quarter-finals after tuning up with a 14-1 defeat of South Africa to complete the group stage.

The Stingers were never expected to be troubled by winless South Africa on Sunday night.

The Hockeyroos know their best-ever start to an Olympics will count for nothing if it is followed by a quarter-final loss to India in Tokyo on Monday.

The Opals will play Puerto Rico in the preliminaries against Puerto Rico on Monday, while the men’s water polo faces Kazakhstan.

This article was first published on The New Daily. Read the original article here