The 27-year-old ‘s triumph gives her a second gold of the Games – she and Campbell were part of Australia’s victorious 4x100m freestyle relay team.

McKeon, who has also won two bronze medals in Tokyo, is one medal shy of equalling the record of Ian Thorpe and Shane Gould for most medals by an Australia at a single Olympics, with five.

McKeon is also favourite for the 50m freestyle and is likely to feature when Australia contends for a 4x100m mixed medley medal, which could give her a record sixth medal of the Games.

Should McKeon win six medals, her Olympic career total of nine will equal Thorpe’s record for most by an Australian. 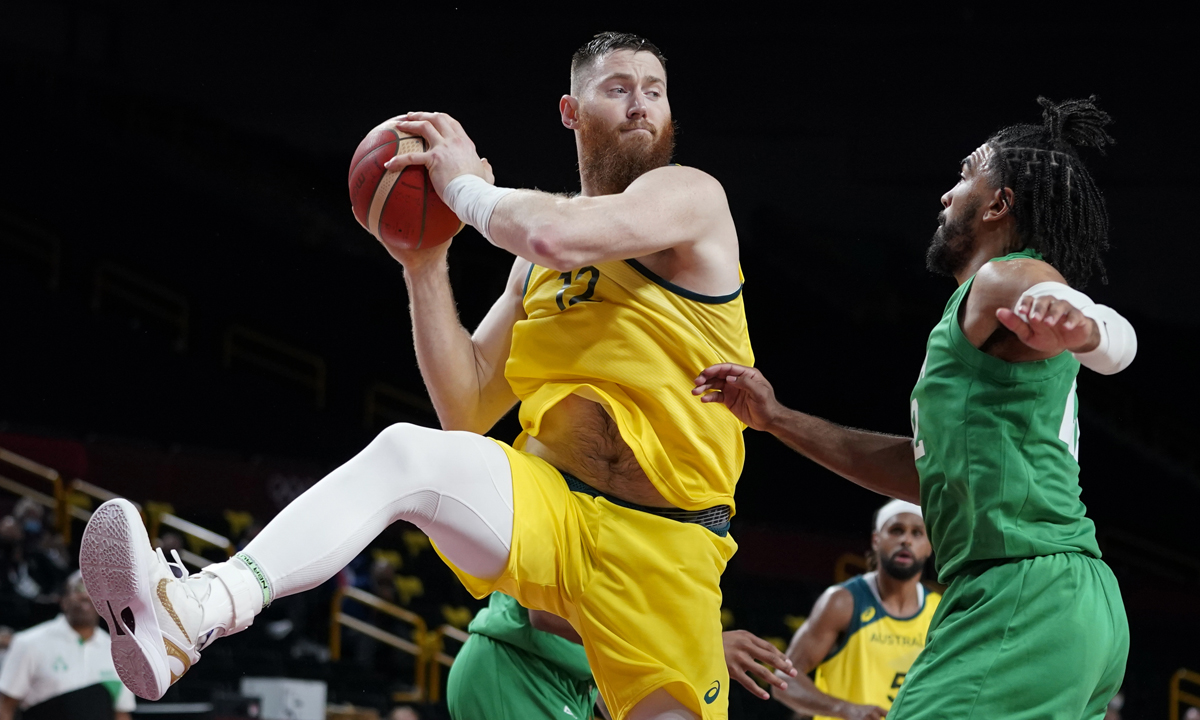 Australia’s Aron Baynes has pulled out of the Olympics with a neck injury. Photo:Charlie Neibergall/AP

Boomers big man Aron Baynes has been ruled out of the Olympics after he slipped and fell on the changeroom floor during a game and aggravated a neck injury.

The triple Olympian failed to finish Australia’s recent basketball game against Italy, which the Boomers won to improve their Tokyo record to 2-0.

Team doctor David Hughes explained that Baynes had been hurt on court and later “slipped in the bathroom and suffered further injury”.

“It became apparent to the medical staff that this was a bit more serious than just an average injury and so as a precaution he was taken to hospital and he’s undergoing further tests at the moment,” Hughes said.

Currently playing for Toronto, Baynes has won an NBA title with San Antonio and he has established himself as one of the world’s most physical forwards to be a crucial cog in Australia’s push towards a maiden international medal.

“I am really disappointed that I can’t continue in the Olympics,” Baynes said.

“I along with the rest of the team have been working so hard in our quest for an historic Olympic medal and I am gutted that I can’t complete the journey with the boys, but I have every confidence that they will get the job done.”

“It’s a tough loss for us. His presence on the floor and physical play has been a big part of our identity for so long and that will be missed, but it doesn’t change our focus and how we go about our business and what we have come to achieve,” Mills said.

Rowers end most successful Olympics with fifth, sixth in eights 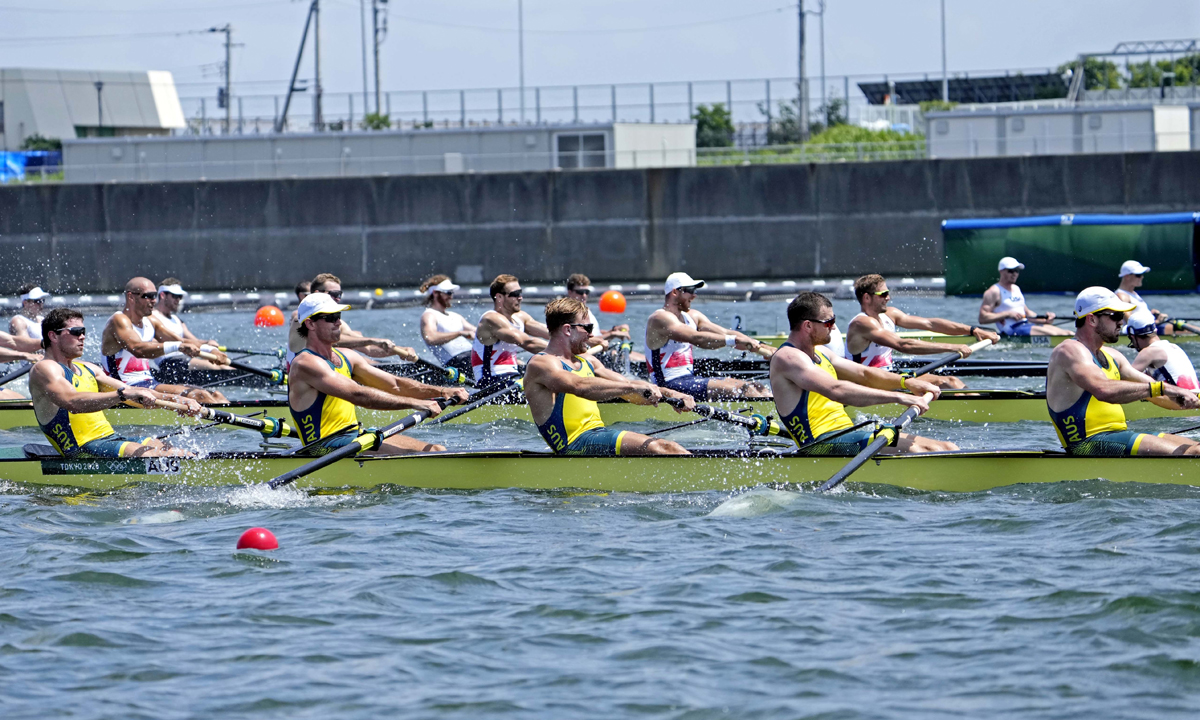 Australia’s rowers have been unable to add to their Olympic medal haul with the eight crews both falling short on the final day of racing in Tokyo.

The women finished fifth in the final with Canada taking gold for the first time in almost 30 years.

And Australia’s men have also been unable to overcome a slow start and finished last of the six crews in their medal race, with New Zealand shock winners.

The Kiwis, who last won the men’s coxless eight at Munich in 1972, relegated world champions Germany to silver and 2016 Olympic champions Great Britain in third.

The USA has dominated the women’s event, winning gold at the past three Olympics, but they could only manage fourth, with New Zealand and China filling the other medal positions.

Australia has never won an Olympic medal in the women’s race and was in the hunt at the halfway mark only to be edged out by their rivals.

The men were disappointing, finishing 11.59 seconds behind New Zealand.

They won five medals in Sydney but no gold. 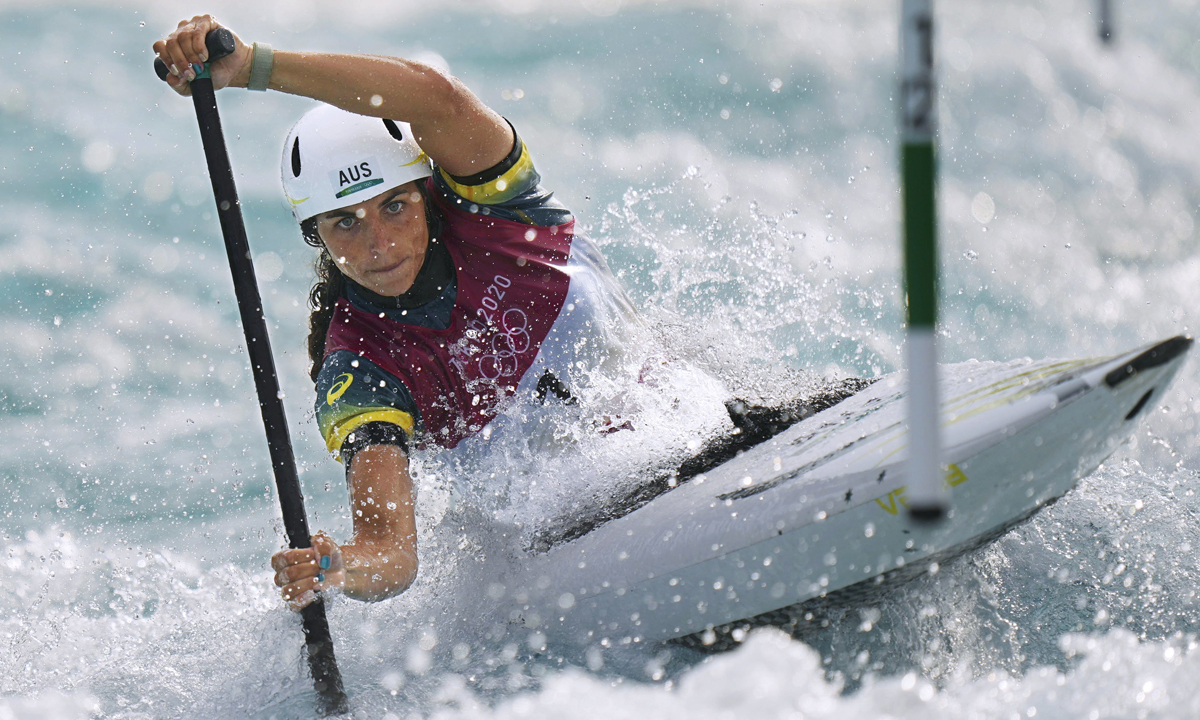 Jessica Fox during her gold medal run in the C1 canoe slalom at the Tokyo Olympics. Picture: Kyodo via AP Images.

Jessica Fox says she can empathise with American gymnastics great Simone Biles over the pressure she felt before her withdrawal from the all-around Tokyo Olympic final.

With 10 world titles and four Olympic medals, including an emotional gold in the C1 on Thursday, to her name, Australia’s Fox is considered the best female canoe slalom paddler of all time.

And Biles is the same in her field, even wearing an embroidered goat on her competition leotards, standing for Greatest Of All Time.

But the 24-year-old American made a shock exit from the team’s event before pulling out of the all-around, citing mental health concerns.

Biles said it had been a “long Olympic process, a long year. We are just a little bit too stressed out. We should be out here having fun”.

While Biles received an outpouring of support, she did cop some criticism on social media for not putting her team and country first.

Fox told of her own pressure going into the Olympics, where she was a raging favourite to win gold in both the K1 and the new C1 – and the heartbreak at falling short in her first event.

Her preparation was also affected with the whitewater venue in Sydney damaged by flooding, while she was unable to compete overseas for more than a year due to COVID-19.

Fox said the stress caused her to vomit before her gold medal run due to nerves, which is something she’d never done before.

With gymnastics always in the Olympic spotlight and Biles the face of the American team, Fox felt for the gymnast superstar.

“I can’t imagine what Simone’s going through,” Fox told AAP.

“It’s very tough to be doing this and I haven’t really been watching the news and been on social media as much as normal.

“I’ve definitely felt that load and that pressure and there was a lot of relief at the finishing line.

“It was very taxing. I had to do a lot of mental work over the past 48 hours.” 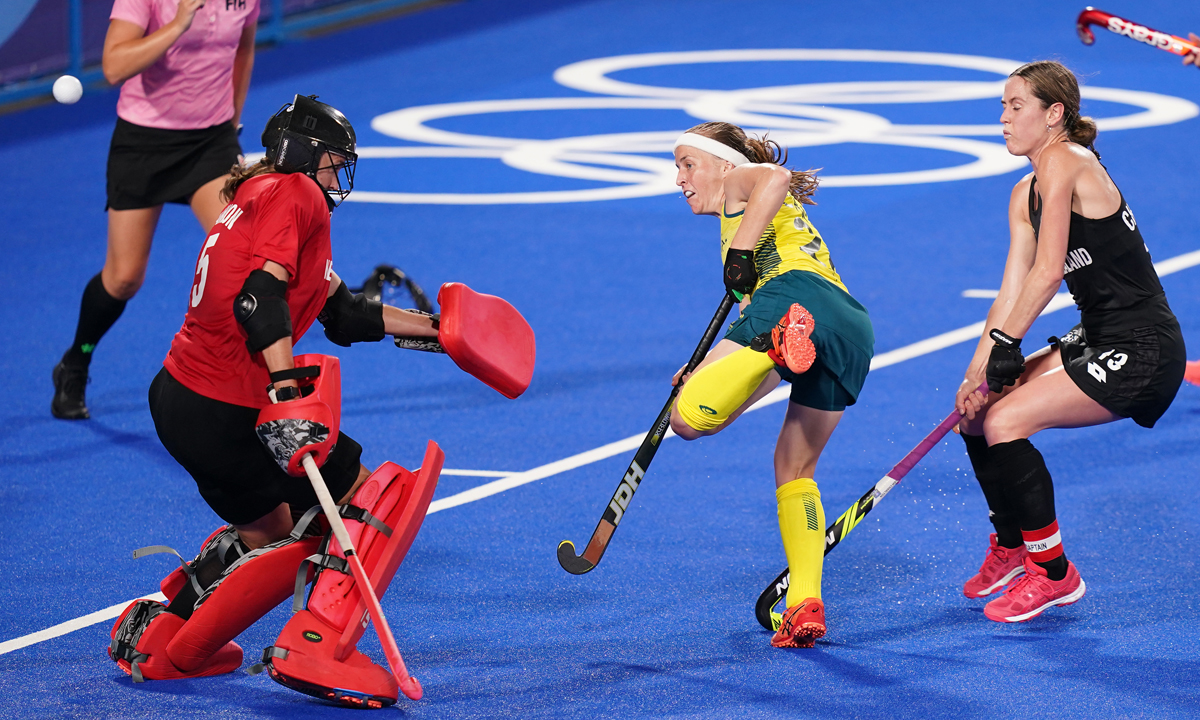 Emily Chalker of Australia scores the only goal during the Women’s Pool B Hockey match between Australia and New Zealand in Tokyo last night. Picture: Joe Giddens/AAP.

The Hockeyroos have made their best start to an Olympics, scraping a 1-0 win over New Zealand to make it four straight victories in Tokyo.

The three-time Olympic champions entered the Games under pressure, with a new coach and their culture in question after claims of body-shaming and bullying led to an external review.

But they have powered to the top of their pool with an 11-1 differential after four games, with two-time Olympic champion Katrina Powell now eyeing another medal as coach.

Their male counterparts the Kookaburras have also won their first four matches o the Olympics to also be among the gold medal favourites.

The Hockeyroos’ final pool game is on Saturday against Argentina, with Australia, importantly, set to top their pool and avoid heavyweights, Germany and the Netherlands, in a knockout quarter-final.

The Netherlands have won their four games with a combined score of 15-1 in Japan in a tough pool that includes Rio gold medallists Great Britain and impressive Ireland, who are set to finish fourth.

The Kookaburras complete their Pool A fixtures against Spain on Friday. 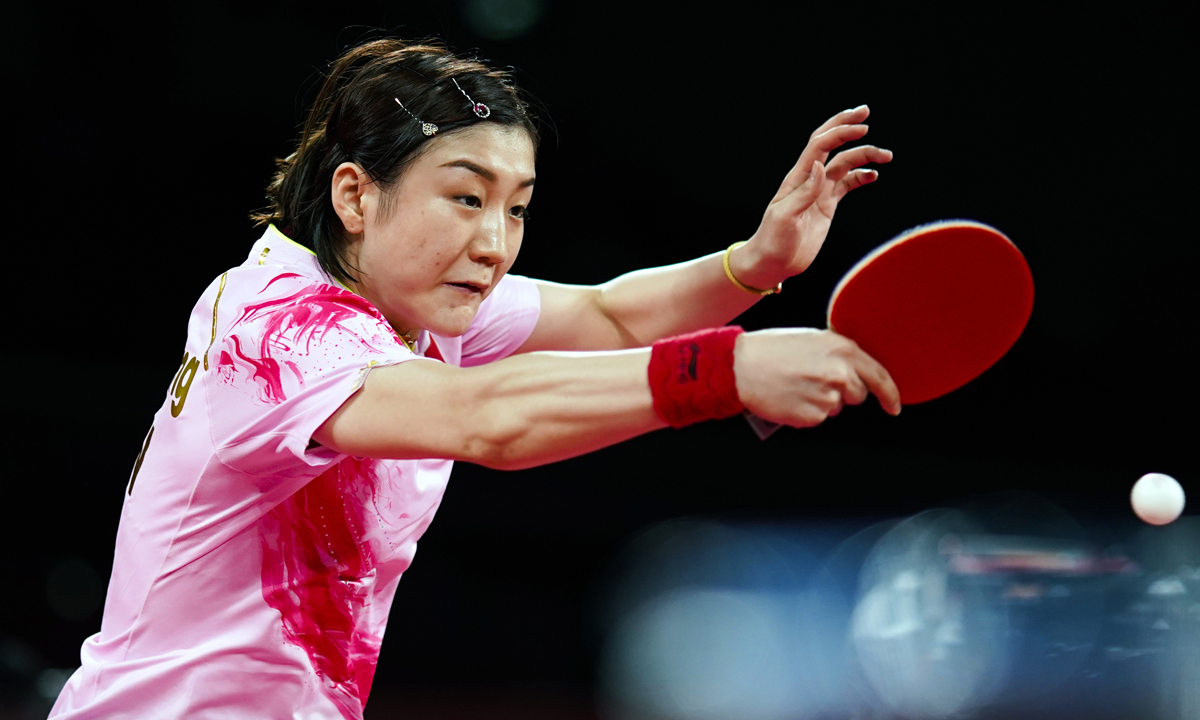 Chen Meng has defeated her compatriot Sun Yingsha 4-2 to win the women’s singles gold as two more Chinese players prepare to play off for gold today in the men’s final.

Chen fired herself up with a mighty yell each time she scored, while the 20-year-old Sun in contrast silently gave a reserved fist pump as she tried to get back into the contest.

The results mean that China will have provided all four finalists in the showpiece matches at the Tokyo Games in the women’s and men’s singles events as they have at every Games since 2008.

China has long been the dominant force in the sport, especially in the women’s singles where the Asian powerhouse has never been beaten to the Olympic title.