Wright suffered a near-fatal head injury while surfing at Hawaii’s Pipeline in 2015 and a bronze caps his remarkable comeback.

But fellow Australian Sally Fitzgibbons was in tears after a shock quarter-final loss to Japan’s Amuro Tsuzuki put her out of medal contention.

She called it the toughest result of her career.

Wright had a narrow loss to Brazil’s 2019 world champion Italo Ferreira in the semi-finals at Tsurigasaki Surfing Beach.

Konoa Igarashi joined Tsuzuki as Japanese giant-killers, executing a stunning aerial to down Medina in their semi-final and set up the gold medal match against Ferreira.

The men’s and women’s finals were moved forward by one day because of the conditions generated by tropical storm Nepartak off Japan’s east coast. 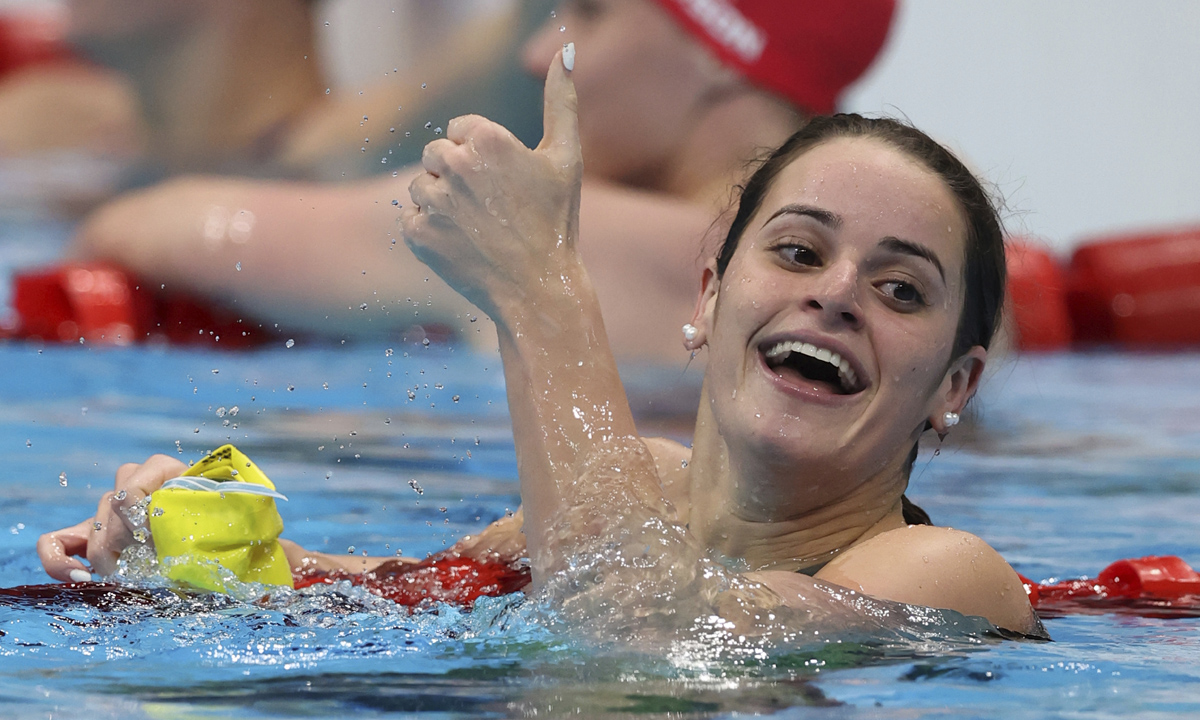 Australian swimmer Kaylee McKeown has won the gold medal in the 100-metre backstroke at the Tokyo Olympics.

McKeown’s triumph is Australia’s third gold of the Games, following the women’s 4x100m freestyle relay and Ariarne Titmus in the 400m freestyle yesterday.

The Australian trailed her feted rivals at the last turn before a stunning surge in the final 30 metres delivered victory in Olympic record time.

McKeown will again meet Smith over 200m, with the Australian dropping the 200m individual medley from her program to focus on backstroke.

Her triumph comes against a backdrop of family tragedy, with her father losing his battle against brain cancer last August.

McKeown dedicated her win to her dad, Sholto, who died in August last year.

Had Tokyo’s Games not been postponed a year because of the coronavirus pandemic, he would have watched Kaylee swim at an Olympics.

Sholto’s death has given McKeown perspective beyond her 20 years.

“It’s not necessarily what I’ve been through,” she said.

“Everyone has had a journey of their own.

“It’s having that really tough mindset and I wouldn’t have had it any other way.

“I don’t think I’d be here today with all that’s happened.” 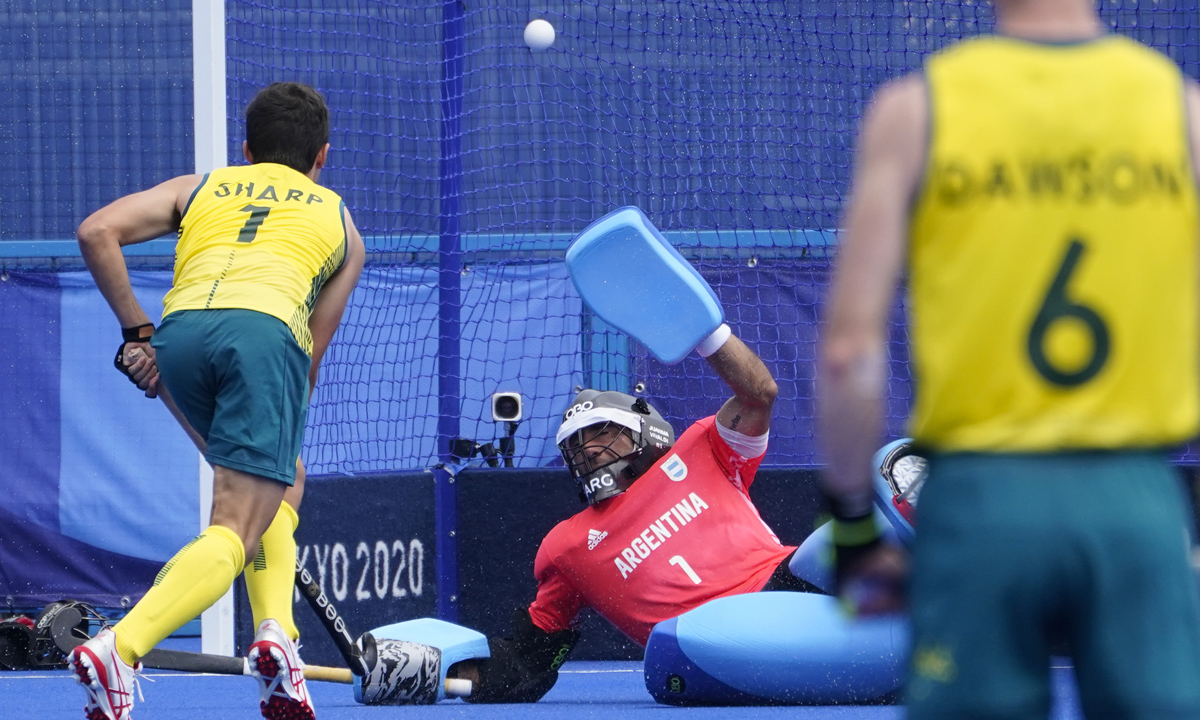 The Kookaburras have underlined their gold-medal credentials by crushing reigning Olympic hockey champions Argentina 5-2 in Tokyo.

World No.1 Australia started these Games with a surprisingly tough 5-3 victory over Japan, but the gold-medal favourites have backed up a 7-1 smashing of India with yet another dominant display.

This morning’s victory ensures the Kookaburras, seeking redemption after a quarter-final loss at Rio de Janeiro marked the first time they missed the Olympic podium since 1988, are on track to top Pool A.

The Kookaburras, who penetrated the attacking circle 24 times compared to Argentina’s seven, have put rivals on notice while pursuing their first Olympic gold medal since Athens 2004.

But they know all too well the job is far from done.

Australia also topped the world hockey rankings at the start of the 2016 Olympics, only to stumble to a 4-0 loss in their quarter-final against the Netherlands.

Colin Batch, appointed coach in the aftermath of Rio, has since helped the Kookaburras win the Commonwealth Games and Champions Trophy in 2018 as well as the 2019 Pro League. 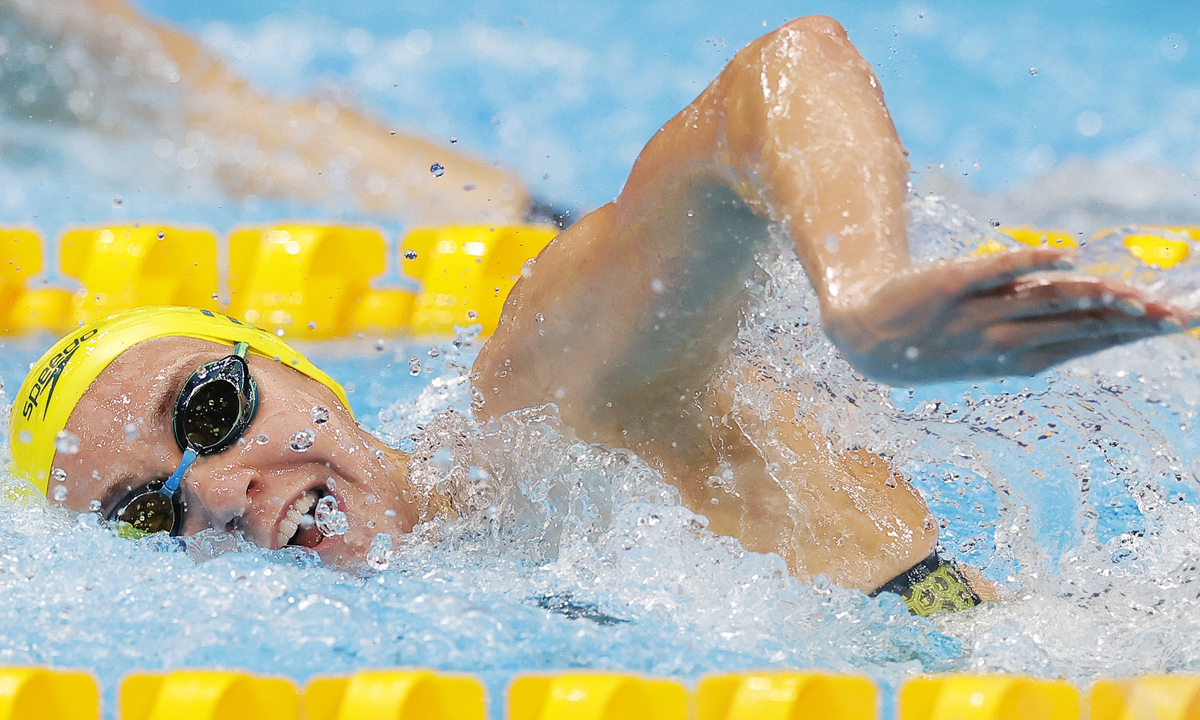 Golden girl Ariarne Titmus has qualified fastest for the women’s 200m freestyle with fellow Aussie Maddie Wilson to join in her in tomorrow’s final.

Wilson finished fourth in semi-final 2 behind American star Katie Ledecky in 1:56.58 to qualify seventh fastest for the final.

Titmus defeated Ledecky in the 400m to win her first gold yesterday.

In other results, Aussie Mitch Larkin finished seventh in the Men’s 100m Backstroke.

Aussies lose to NZ in rugby sevens but likely to advance 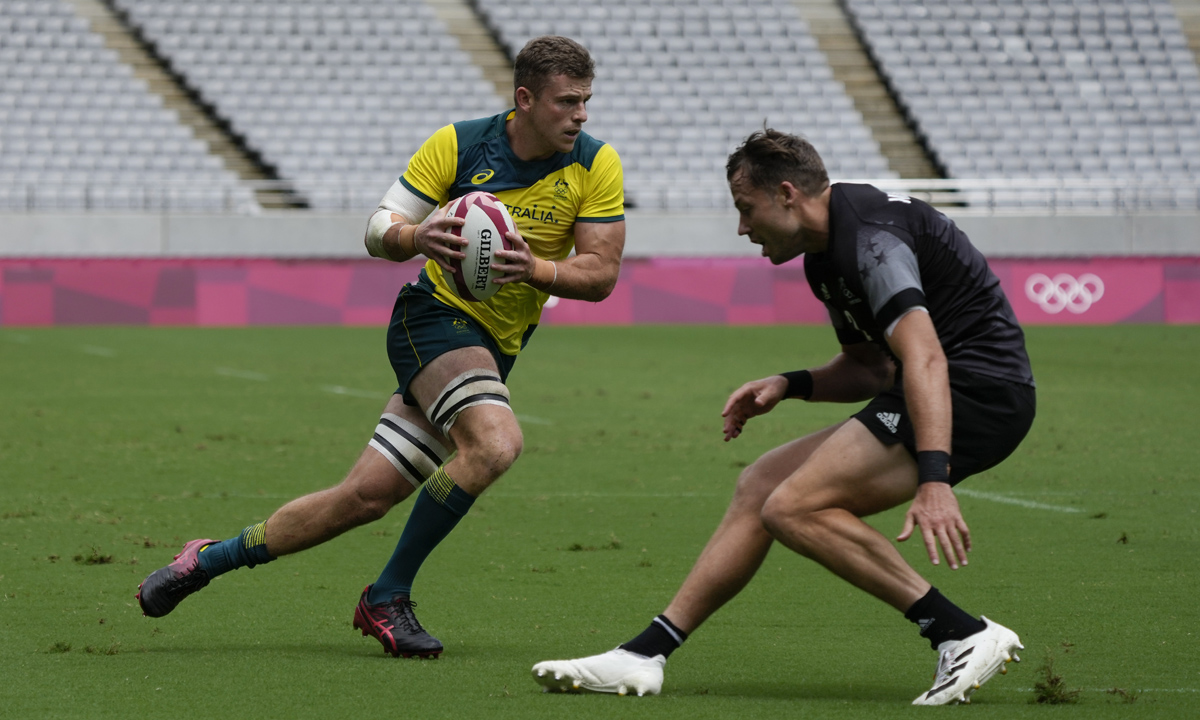 Australia face a nightmare path to an Olympic medal after missing their chance in a 14-12 men’s rugby sevens loss to New Zealand.

The result left Australia third in their pool and, as one of two lucky losers, waiting on other results to confirm their opponent in the Games’ quarter-final stage in Tokyo.

A 42-5 defeat of South Korea on Monday at least helped Australia accrue a favourable 25-point differential, meaning they will finish as one of two best third-placed sides across the three pools.

That will see the match-up in the final eight against either defending Olympic champions Fiji or New Zealand again later on Tuesday.

Despite a horror loss to Argentina on Monday, they could have finished the pool on top with a 20-point defeat of their trans-Tasman rivals.

And the boilover looked on the cards when Australia began impressively, Wallabies’ recruit Samu Kerevi dominating the early exchanges as they hogged possession and played with composure to finish the half up 12-0.

The Kiwis scored to start the second half but a yellow card for Dylan Collier gave Australia a two-minute window with a one-man advantage.

They coughed up possession on the first play though, Andrew Knewstubb dancing through for the go-ahead try.

Australia knocked on twice more in the final stages searching for the reply to cap what has been so far a frustrating tournament. 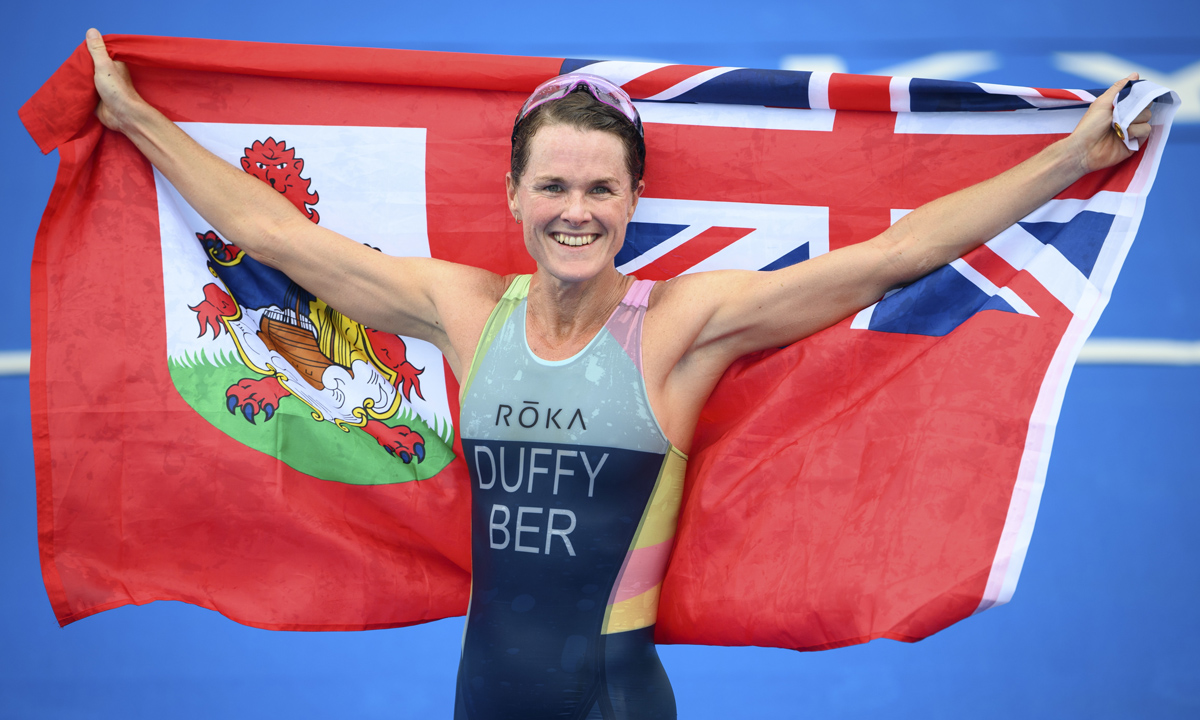 Bermuda’s Flora Duffy celebrates after she crossed the finish line at the women’s individual triathlon competition this morning in Tokyo. Picture: Laurent Gillieron/EPA

The two-time world triathlon series champion enjoyed a perfect race on Tuesday at Tokyo’s Odaiba Marine Park, finishing the 1.5km swim, 40km cycle and 10km race by herself in one hour 55 minutes 36 seconds.

It is Bermuda’s second Olympic medal, following a bronze at the 1976 Games.

The four-time Olympian and 2018 Commonwealth Games gold medallist finished a whopping one minute 14 seconds clear of Great Britain’s Georgie Taylor-Brown, who was left ruing a flat tyre late in the bike leg.

American Katie Zaferes was 13 seconds behind Taylor-Brown for the bronze.

The Australians, once a nation to watch in triathlon at the Olympics, had another dirty day.

Emma Jeffcoat was well-placed in the first chase group after the bike, but faded on the run.

She finished 26th at 7:21, while Ashleigh Gentle and Jaz Hedgeland were lapped on the run and did not finish.

Rain and wind delayed the start of the race by 15 minutes, meaning cooler conditions than the men’s race on Monday, but also greasy conditions on the bike.

But there was no repeat of the false start fiasco in the men’s race on Monday, with the photographers’ boat well away from the swim pontoon. 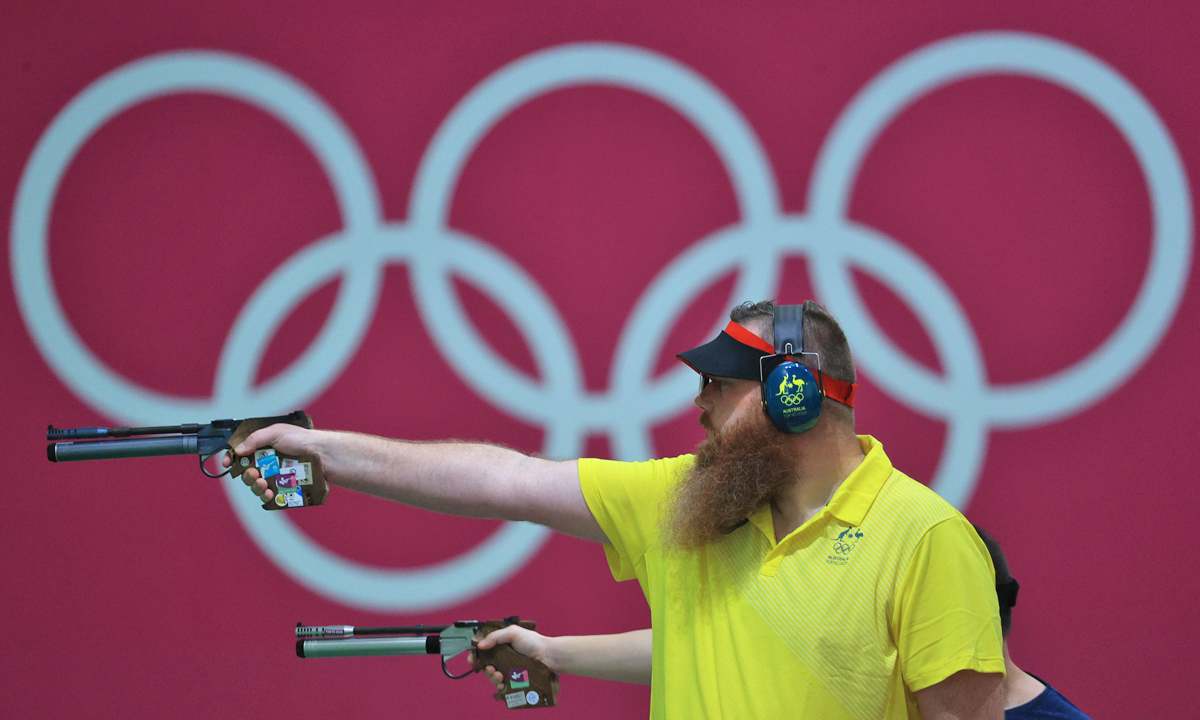 Australia’s pistol pairing of Dan Repacholi and Dina Aspandiyarova have finished eighth in the 10-metre team event at the Tokyo Olympics.

Repacholi and Aspandiyarova posted an impressive combined score of 576 in the opening competition.

It meant they ranked sixth of eight teams advancing to the next phase of qualifying.

But the Australians logged a score of 380 in the ensuing two-series contest, which decided who would progress to today’s gold-medal and bronze-medal shootouts.

The Australian duo was at least the most distinct of the 20 sides competing at the Asaka range.

Repacholi, taking part in his fifth Olympics, is an imposing 2.02m tall and boasts almost certainly the largest beard at these Games.

The 39-year-old from Cessnock also competed in rainbow socks, which were given to him by daughters Zoe and Asha.

The shooter was given permission by the Australian Olympic Committee to supplement its standard green-and-gold uniform.

Aspandiyarova is 1.58m just tall but, like Repacholi, has no shortage of experience.

Several Olympic events scheduled for today have been delayed while the surfing finals have been brought forward to make the most of better waves as tropical storm Nepartak churns toward Japan’s main island.

Rowing and archery events have been moved due to the storm, which is expected to head over Japan’s north-east coast on Tuesday and could bring heavy rain to the capital.

Rowing races were rescheduled for later in the week, while Monday’s events were moved to Sunday in anticipation of the storm.

Rain and wind delayed the start of the women’s triathlon on Tuesday morning by 15 minutes.

That made for dangerous conditions on the bike leg, with Australians Ashleigh Gentle, Emma Jeffcoat and Jaz Hedgeland racing.

While the rain eased after the 1.5km swim, Russian Federation triathlete Anastasia Gorgunova and New Zealander Ainsley Thorpe crashed out early in the 40km cycle, with the 10km run to come.

However, the predicted high winds are expected to deliver better waves, persuading Games officials to adjust the surfing schedule.

Australian surfing stars Sally Fitzgibbons and Owen Wright revelled in the windier conditions to book quarter-final berths on Monday and might benefit from the tropical storm in their pursuit for gold.

The women’s and men’s quarter-finals took place this morning.