Finals fever has gripped most sporting codes – from cricket to Esports – as players gear up or wind down after a thrilling finals campaign.

Metro United WFC will be the team to meet Adelaide City in this Friday’s WNPL Grand Final at VALO football centre after beating Salisbury Inter 3-2, thanks to an extra time goal in the 108th minute by Metro United’s Donna Cockayne.

Metro came back from a goal down twice, trailing 1-0 and then 2-1. The result was a massive turnaround for Metro United WFC after losing 6-2 to Salisbury Inter earlier in the season. Kick off for the WNPL Grand Final is 8:15pm.

Adelaide Olympic talisman Nick Harpas bagged two goals, with one coming in the 92nd minute, to see his side beat Adelaide City 2-1. The win sees Olympic sit just one point outside of a finals spot with four games left in the regular season. 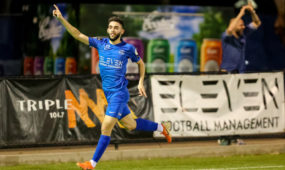 Adelaide Comets still have a grasp of top spot even though they fell 3-1 to second-placed Croydon Kings. Campbelltown had an opportunity to rip the number one spot from Comets’ grasp with a win, but couldn’t pull through and drew with Adelaide United Youth 0-0.

The result sees Comets maintain a one-point gap over second-placed Croydon and third-placed Campbelltown as well as two points clear of fourth-placed MetroStars.

Newly-promoted Adelaide Hills sit seventh and one point outside of finals after a shock win against the then top of the table team, Sturt Lions, winning 2-1.

Central District have sacked coach Jeff Andrews one year into his three year contract with the club. This comes after his side finished seventh and failed to make the SANFL finals.

The North Adelaide Roosters booked themselves a ticket to the SANFL Grand Final after beating Woodville-West Torrens Eagles 77-62. The result came from a strong performance by Rooster William Combe, who recorded three goals and bagged 20 disposals.

Malcolm Karpany kicked four goals and helped his side South Adelaide grab its first finals win in six years, beating Glenelg, 96-71. The win secures the Panthers a spot in this years SANFL Preliminary Final, set to be played Sunday, October 11, against minor premiers, the Eagles.

Goodwood Saints Football Club are Division 1 premiers after beating Rostrevor at Norwood oval 66-50. After a slow first quarter start which saw Goodwood down 7-20, they were able to turn it around and lead the game at the end of each subsequent quarter.

The celebrations didn’t stop there for the Matrics,  with two of their players, Georgia Dent and Sophie Croft, securing a spot in the Netball SA Premier League team of the year and Casey Bernhardt grabbing rookie of the year.

Madi Wilson set a state record in the women’s short course 100 metres freestyle at the SA Short Course Championships at the SA Aquatic & Leisure Centre. She smashed the previous record of 52.29 by clocking 52.13.