The event is expected to attract up to 5000 visitors to the South-East farming town with a population of 1200.

It will be the crowning moment for the volunteers at the Keith & Tintinara District Show Society who built the track for its Diesel & Dirt Derby, which is a fundraiser for its once-struggling show.

The 2018 Penrite UIM World Series will feature 46 boats across International Group A and Unlimited Superboats classes including teams from New Zealand and the United States.

A second and final round of 2018 World Series racing will be held at Cabarita in New South Wales on November 3 and 4.

The World Series is held every two years but it will be the first time Australia has hosted the major international event since 2010.

Australian Formula Jet Sprint Association President Grant Bourke said a lot of hard work had gone into planning the series but it was coming together well.

He was confident the world-class Keith track would be well received by the international teams.

“We haven’t had a world series here (Australia) for a little while now and a lot of people are really looking forward to it,” Bourke said.

“They’ve put a lot of time, effort and money into that Keith track and they’ve got a really good crew in the background that can help run the series and that was a big plus.

“Our guys loved it the first year and even better this year when they added an extra channel so this will only be the second time the Australian teams have raced on the track, which makes it a pretty even playing field for everybody.”

With just a few hundred dollars in the bank, the Keith Show committee started the annual Diesel & Dirt Derby in 2013, which includes country motorsport events such as tractor pulls, buggy racing and a header demolition derby, and added jet boat racing last year to take it up a notch.

The Keith jet boat track has hosted rounds of the Australian V8 Superboats series the past two years in conjunction with its Diesel & Dirt Derby, which this year attracted almost 12,000 people – roughly 10 times the town’s population.

Keith World Series Organising Committee Chair Glen Simpson said the town’s main street would be closed for scrutineering and a street party on Friday afternoon and evening to allow visitors and locals to get up close and personal with the boats and teams. 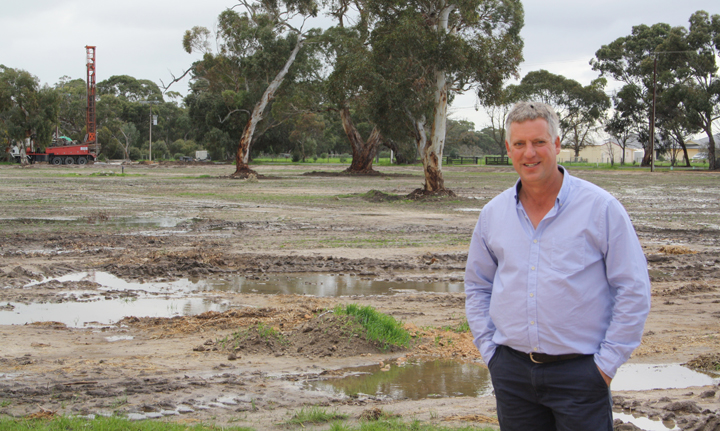 Qualifying will be held Saturday and Sunday morning with the racing on Sunday afternoon.

“We think it will probably bring 5000 people to the town each day … it’ll really help put Keith on the map,” Simpson said.

“This is the pinnacle of jet boat racing for us and having the best racers in the world here is great.

“It’s hard to believe that in a couple of years we’ve gone from an open paddock that we dug a trench in and pushed a bit of dirt around to a world series.”

This story was first published by The Lead South Australia.