How he performs head-to-head against Peter Sagan will go a long way to determining that answer.

Matthews’ barnstorming performance at the Tour de France, capped by him becoming the third Australian to win the green jersey category, was no surprise.

It has been inevitable for several years that the 26-year-old Canberra rider would be in the sport’s top echelon.

But Sagan is the man. For all Matthews’ undoubted talent and toughness, Sagan for now is his superior.

That is no slight on the Australian. Sagan is superior to nearly everyone.

It is also no slight on the Australian – simply a fact – that had Sagan stayed in the Tour this year then the Slovakian ace probably would have won the green jersey for the sixth-straight time.

Sagan is second only to German sprint legend Erik Zabel, who won six green jerseys at the Tour.

Sagan also has claimed the past two world road titles and his career boasts a whopping 96 pro wins.

He is charismatic, good-looking and just what cycling needs as the sport rebuilds its shattered reputation, post-Lance.

Matthews, well-known as Bling, is also an affable character.

He earned that nickname for turning up to one of his first bike races showing off some jewellery.

A friend’s Dad christened him Bling and it stuck.

But Matthews is a lot more than a showy personality.

Three days into his 2015 Tour de France debut, Matthews was hurt in a horrifying mass pileup.

Despite bruised ribs, he finished the race.

And this year, as first Sagan and then Marcel Kittel were the green jersey favourites, Matthews held his nerve.

His Sunweb team rode superbly and Matthews became a contender thanks to his two stage wins.

He was only nine points adrift of Kittel when the German abandoned the race in the last week because of a crash.

Matthews has flourished in his first year at Sunweb, which he joined after four years at Australian team Orica-Scott.

While Matthews and Orica-Scott were good for each other, it was time for a change.

Orica-Scott were developing into a general classification team for the Grand Tours and Matthews, for all his talents, is not a GC rider. 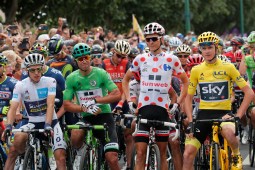 That became obvious at the 2015 road worlds, where Matthews was runner-up to Sagan and Gerrans was also in the top 10.

There were differences of opinion about the Australian team’s strategies, but nothing anyone did would have stopped Sagan.

Not for the first time, Sagan was a class above all his rivals.

It is no coincidence that Matthews and Sagan keep crossing paths – Orica-Scott rode superbly last year to help the Australian beat the Slovakian for his first Tour de France stage win.

They are similar riders – not pure sprinters, but versatile opportunists who are deadly on a short, steep climb and ideally-suited to cycling’s one-day classics.

The sky’s the limit for Matthews. And his rivalry with Sagan should be epic.