Sunweb rider Matthews won his second stage of the race after his teammates set a scorching pace at the head of the peloton to take the sting out of the challenge of points leader Marcel Kittel, who was dropped during the stage.

In the sprint to the line he edged out Edvald Boasson Hagen (Dimension Data) and Degenkolb (Trek-Segafredo), who clashed with Matthews as the riders came to a stop, accusing him of veering towards him on the high-speed dash for the line.

“He grabbed me by the neck. The officials saw that. I don’t know what they’re going to do about it,” Matthews said.

“It was not very sportsmanlike.” 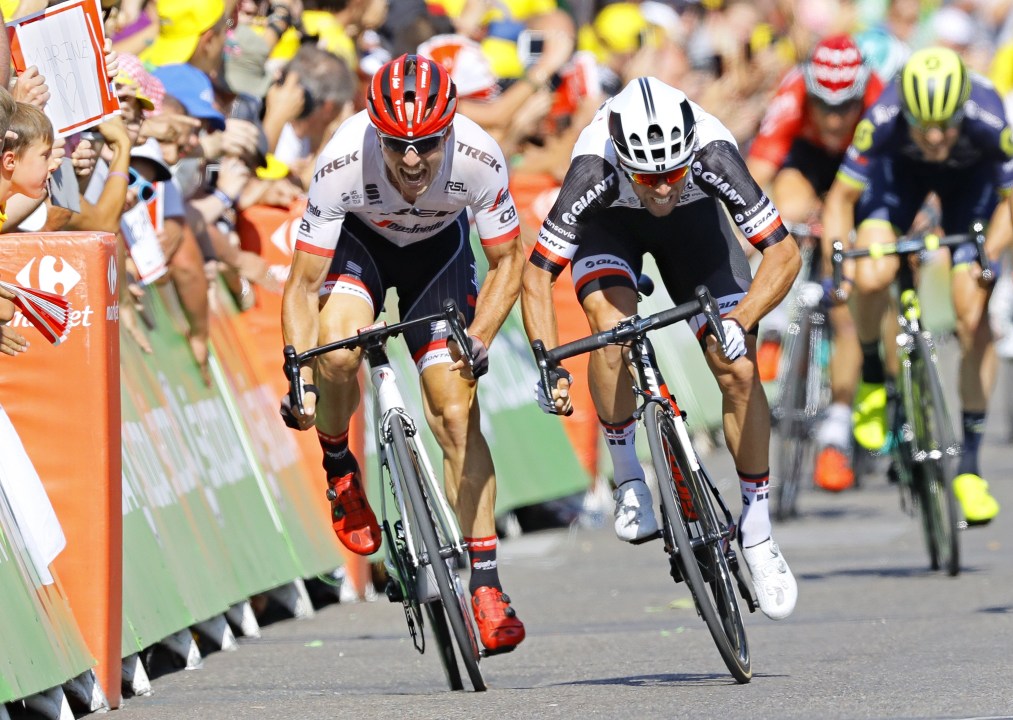 Degenkolb gesticulated at Matthews as the pair crossed the line, appearing to indicate that he felt the Australian had pushed him dangerously close to the barriers.

“From my perspective I didn’t do anything wrong,” he said.

“I started my sprint and sprinted in a straight line. I don’t know what’s wrong with him, but that’s up to him.

“If I had done anything wrong the race officials would have told me.”

Kittel, who suffered in the hot cross-winds that played havoc with the peloton, has 373 points in the green jersey race with Matthews on 344.

Matthews said with so few stages left he would be hunting high and low for points over the next few days as he tries to snatch the green top from powerhouse Kittel, who has already won five stages at this year’s event.

“It’s nice to have a lot of tools but that means I don’t have a rest day,” he said.

“Kittel is the fastest guy on the flats, so I won’t beat him on those, but I need to get points everywhere else, like the hilly stages and uphill sprints.”

Despite the fracas, the Australian let out hoots of joy when he was notified he had got up by a wheel length to claim his second stage win on this tour, after claiming stage 14 on Saturday.

“To get another win in the same Tour de France… wow,” Matthews said.

“Normally when I am in a Tour… I can normally win one stage but the second one is the hardest to get.

“I think it won’t sink in until tomorrow morning.”

The stage played out perfectly for Matthews as heavy cross-winds broke the field apart and Kittel couldn’t go over the climbs.

“I was trying to go in the breakaway but Quick Step (Kittel’s team) was covering me to get the points, then I heard Kittel was getting dropped and when I heard he dropped one minute over the climb we went for it,” he said.

While Matthews is now closing in on the green jersey the race for the yellow continued to intrigue.

Chris Froome kept the yellow ahead of two difficult days in the alps as he and his main rivals Fabio Aru, Romain Bardet and Rigoberto Uran – managed to stay at the front and crossed the finish line together.

Froome, the defending champion, has an 18-second lead over Aru, with Romain Bardet 23 seconds back in third place.