Power, from Toowoomba, was involved in five-car wreck late in Sunday’s race.

With 17 laps to go, Oriol Servia appeared to touch James Davison from behind in the first corner and both of them slid up into the wall.

James Hinchcliffe and Power were caught up in the carnage behind them.

In a separate incident, Dixon was lucky to walk away from a spectacular, flying crash on turn two of lap 54, where he was near the front of the field and hunting down the lead after starting on pole.

Another driver, Jay Howard, hit the wall, lost control and ran into the path of Dixon who ran over the top of him and flipped into a barrier wall before spinning down the track.

Flames momentarily spewed from the flying car as it disintegrated on impact.

The car lost three wheels and what looked like much of its rear section but the safety tub remained intact and Dixon was able to climb out, to the roar of the crowd. 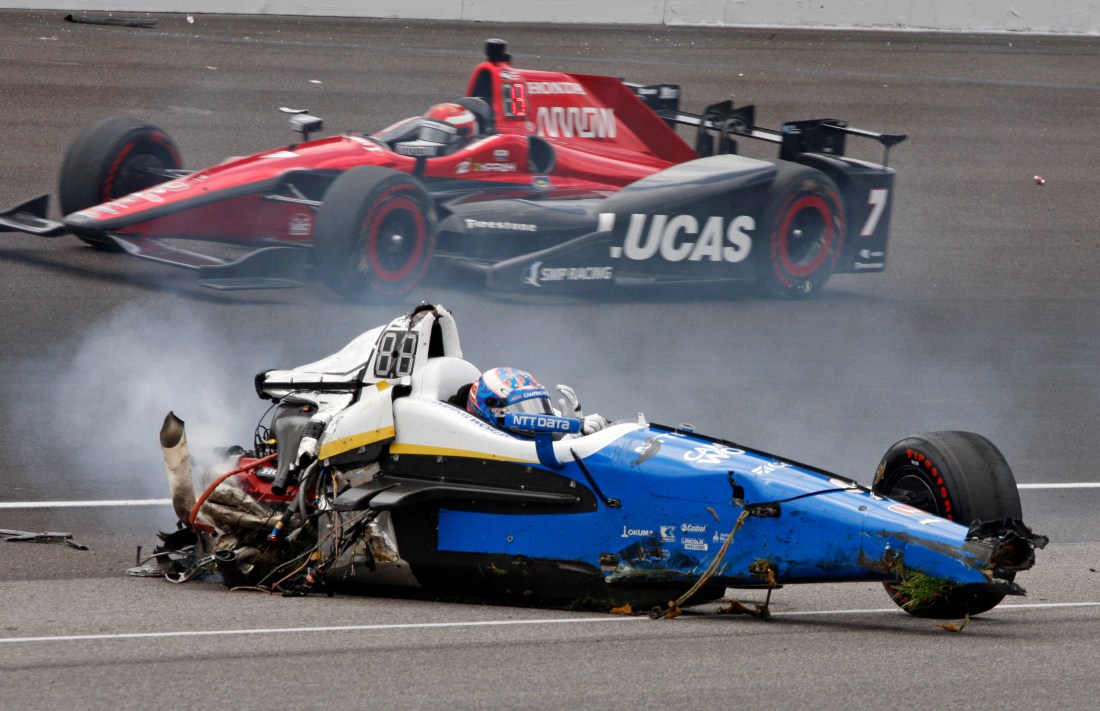 Scott Dixon sits in the remains of his car after the crash. Photo: Bud Cunningham / AP

Howard was also able to walk away from the crash.

Dixon, the 2008 Indycar champion, described it as a “wild ride”.

“You’re hoping Jay is going to stay against the wall. I already had picked that way to go. There was nowhere else to go to avoid him. It’s just a wild ride. You hold on and believe in the safety progress we’ve made.”

“It was definitely a rough ride,” he said.

“I’m just bummed for the team, man. We had a great shot.”

Sato, who entered Sunday’s race with one IndyCar victory on his resume, claimed the sport’s biggest prize and in the process denied Helio Castroneves a record-equalling fourth Indy 500 win and a place in the Brickyard’s most exclusive club.

Two-time Formula One world champion Alonso, who skipped the Monaco Grand Prix to make his IndyCar debut, led for 27 laps and looked ready to earn a fairytale victory until his Honda engine expired with 21 laps to go.

It was a case of deja vu for the Spaniard, who came to the Indy 500 partly to escape the engine problems plaguing his McLaren Formula One team.