Wiggins in 2012 became the first British Tour de France winner and Froome has since inherited the Team Sky leadership and won the maillot jaune in 2013, 2015 and 2016.

Data stolen by hackers from files held by the World Anti-Doping Agency showed Wiggins received three therapeutic use exemptions (TUEs) for anti-inflammatory drug triamcinolone – a substance which has a history of abuse in cycling and is otherwise banned – on the eve of the 2011 and 2012 Tours and 2013 Giro d’Italia.

Wiggins and Team Sky principal Sir Dave Brailsford, the British Cycling performance director until April 2014, have strenuously denied any wrongdoing, insisting each time the TUEs were medically necessary to deal with a pollen allergy that aggravates Wiggins’ long-standing asthma condition.

The TUEs also had the approval of the UCI, cycling’s world governing body, and there is no suggestion that Wiggins, who left Team Sky in April 2015, or the team, have broken any rules.

Froome’s two TUEs were published on the same day by hackers Fancy Bears, although already well known. But Froome was unaware of his former team-mate’s TUEs.

“I was surprised, it was the first that I had heard of them,” he told cyclingnews.com.

“I had seen Bradley Wiggins using his inhalers so I knew he had asthma, but I wasn’t aware of his allergies.

“Without knowing the exact details of his medical condition, it’s impossible to say if he was operating in a grey area.

“Questions remain over his symptoms, the choice of treatment and the related performance benefits from that treatment.”

Froome finished second to Wiggins in 2012 and won the 100th Tour in 2013, the first since Lance Armstrong’s public doping confession.

“It’s a great shame for the sport that we’re once again debating the validity of a Tour de France victory,” Froome added. 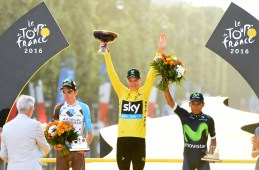 Love him or loathe him, Chris Froome is the poster boy cycling needs

Wiggins in August won his fifth Olympic gold and eighth medal in all, surpassing Hoy as the Briton with the most Olympic medals.

And six-time Olympic champion Hoy says Wiggins must answer his doubters over his TUEs.

“I think he has to answer questions, otherwise there will always be a question-mark hanging over him,” Hoy told the BBC.

“It’s not been a great few weeks for Team Sky and for Bradley, in particular.

“I think it is up to Bradley – he needs to clear his name, I’m sure, and explain what the situation was.”