Preparing for his sixth and final jump in the men’s T36 long jump final, the 18-year-old closed his eyes, deep in thought, then gazed to the heavens.

It was to acknowledge the two people who helped him get there, but are now gone.

Davidson’s late grandparents first encouraged him to take up para-sport.

“They were massive supporters of me,” Davidson said.

“My nanna was the one that gave me the dream of even going to the Paralympics.”

The South Australian, who has cerebral palsy, leapt a Paralympic record of 5.62m to score the first gold for Australia’s athletics team in Rio.

It was 11cm further than his previous personal best.

“That first jump, I absolutely jumped out of my skin. Our group just erupted. It is a breakthrough for us,” he said.

“I was jumping after the Brazilian, hearing the roar every time he jumped. Even though it was for him you could use that energy a bit,” he said. 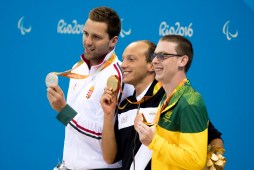 “Me and Rodrigo (were) just pushing each other to the absolute limit.”

Davidson dedicated his victory to his grandparents.

“Later on tonight when all the excitement dies down, I shall just sit by myself and take some time. I will just look up and have a think,” he said.