Mills, a back-up to Tony Parker at the Spurs, has been one of the standouts in the men’s basketball competition at the Rio Olympics.

Not only has he been Australia’s top point scorer, he is second in the tournament for points per game with an average of 21.2.

He banked a game-high 24 points in the Boomers’ 90-64 demolition of European powerhouse Lithuania to secure them a spot in the semi-finals and a chance to break their Olympic medal duck.

He sunk five of 11 from the three-point line and missed just one inside.

“You get him looks and it’s money,” said Boomers assistant coach Longley.

“The shots he’s missing are the tough shots at the end of the clock.”

Mills has proved his worth over the years, but Longley believes he has well and truly stamped his mark at the Rio Games.

“There’s no doubt he’s a first team point guard or two man somewhere in the NBA,” he said.

“He’s just been in a very deep and talented situation at San Antonio. 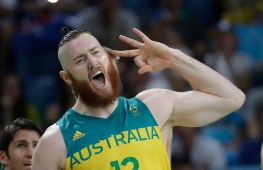 Boomers make a statement in Rio

“He’s very potent for us. He makes a lot of room for the big guys by being so potent.”

Mills is the man behind setting Australia’s goal of winning gold in Brazil.

His leadership on and off the court has been inspiring, according to coach Andrej Lemanis, and is driven by his desire to proudly represent his country and heritage on the world stage.

“The thing I appreciate the most with him – everyone sees his offence but he’s really got into his defence at this tournament,” said Lemanis.

“He’s prepared to sacrifice for the good of the team.

“We all see when he scores, but he goes through the video and he sets screens to get other people open.