The Australian Federal Police have told team bosses of an increase in crime in Rio’s landmark areas, prompting reinforced security measures for athletes.

Last night American Ryan Lochte and three other American swimmers were robbed at gunpoint by thieves posing as police officers who stopped their taxi and took their money and credit cards.

In the latest security incident to hit the Rio de Janeiro Games, Lochte told American network NBC that one of the robbers put a gun to his forehead before taking his wallet and money. No one was injured. 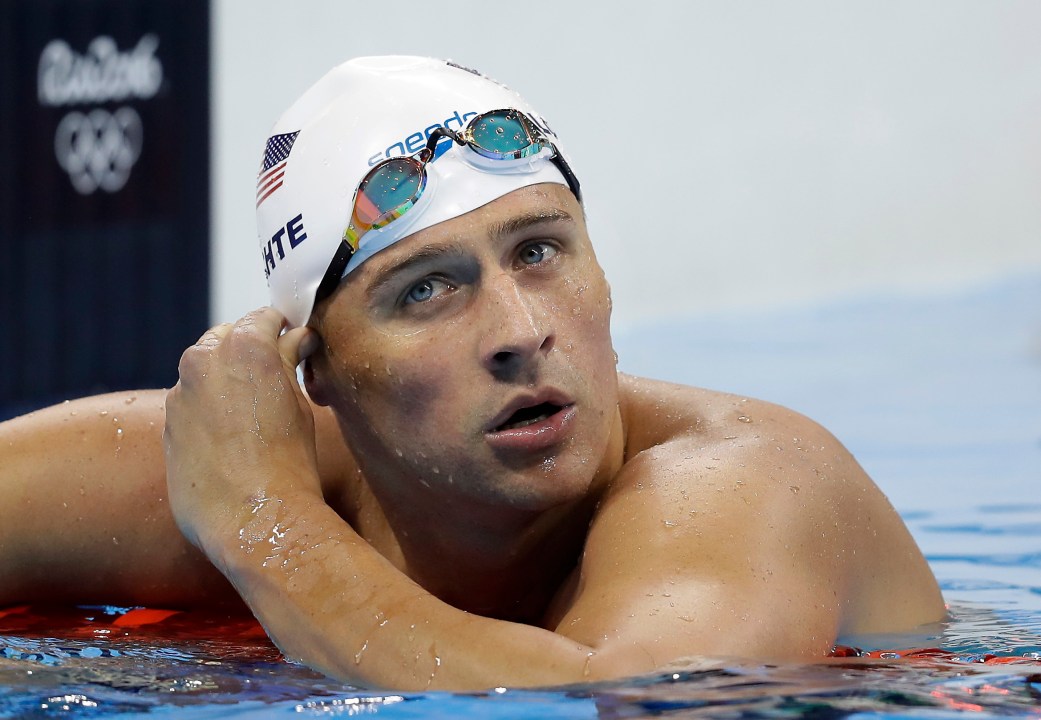 Ryan Lochte and three US teammates say they were held up by robbers posing as police. Photo: Michael Sohn / AP.

Lochte and his teammates were returning to the athletes’ village by taxi early on Sunday, local time, after a night out at the French Olympic team’s hospitality house in the Rodrigo de Freitas area in the upscale south zone of the city.

The outing was several hours after Olympic swimming ended on Saturday night at the Rio Games.

“Their taxi was stopped by individuals posing as armed police officers who demanded the athletes’ money and other personal belongings,” USOC spokesman Patrick Sandusky said in a statement.

“All four athletes are safe and co-operating with authorities.”

Sandusky told The Associated Press the robbers took cash and credit cards only, and that no Olympic medals were lost.

Travelling with Lochte were Gunnar Bentz, Jack Conger and Jimmy Feigen. Lochte swam in two events at the Rio Games, winning gold in the 4x200m freestyle relay. He is a 12-time Olympic medallist.

Bentz and Conger were also part of that relay, their only event in Rio. Feigen was in the 4x100m freestyle relay, another gold winner for the US in Rio.

“We got pulled over, in the taxi, and these guys came out with a badge, a police badge, no lights, no nothing just a police badge and they pulled us over,” Lochte told NBC’s Today show.

“And then the guy pulled out his gun, he cocked it, put it to my forehead and he said, ‘Get down’ and I put my hands up, I was like ‘whatever’. He took our money, he took my wallet – he left my cellphone, he left my credentials.”

Word of the robbery touched off a chain of confusion between Olympic and US officials.

An International Olympic Committee spokesman said reports of the robbery were “absolutely not true”, then reversed himself, apologised and said he was relying on initial information from the USOC that was wrong.

Australia’s chef de mission Kitty Chiller says athletes are not to wear team uniform when they’re outside the village not competing and must travel in groups of three.

“We’ve put the Copacabana and Ipanema beaches, the actual sand, off limits, there’s been a lot of increased petty criminal, but criminal, activity on the actual beaches,” Chiller said.

Team members must travel by vehicle between 6pm and 6am, even if it’s only a few hundred metres.

Chiller said athletes are encouraged to go out in the safer Barra district, around 25km west of Ipanema.

“We’ve found areas in Barra to go to rather than travelling into town because the Copa-Ipanema area is where the unsavoury activity is happening,” Chiller said.

Swimmer Mitch Larkin admitted it was disappointing athletes’ movements in Rio were restricted, but agreed safety and security was the priority.

Chiller said there had been no incidents involving Australian team members since two rowing coaches were robbed at knifepoint at Ipanema Beach on the night of the opening ceremony.

She and AOC security chief Greg Nance have been meeting with team leaders as sports finish their competition to reinforce the security protocols.